Strasbourg is one of the most important tourist destinations in France, as it attracts the attention of thousands of tourists coming to France because of its picturesque nature and rich parks, with a number of archaeological and historical monuments dating back to the Middle Ages.
If you are looking for a holiday decorated with relaxation and relaxation among the most beautiful landscapes with some useful historical and cultural visits, you can define Strasbourg as your next tourist destination, and to tighten the tourism trip plan in Strasbourg we offer you the following article that explains where Strasbourg is located specifically and what the nearest tourist cities are.

Strasbourg owns a group of the best hotels in France, which provide its guests with a high level of luxury, service and various facilities and forms of entertainment ideal for families and those looking for a holiday full of recreation, and through the following link we offer you a comprehensive guide to the best hotels in Strasbourg that have been nominated and evaluated by visitors .. Read more 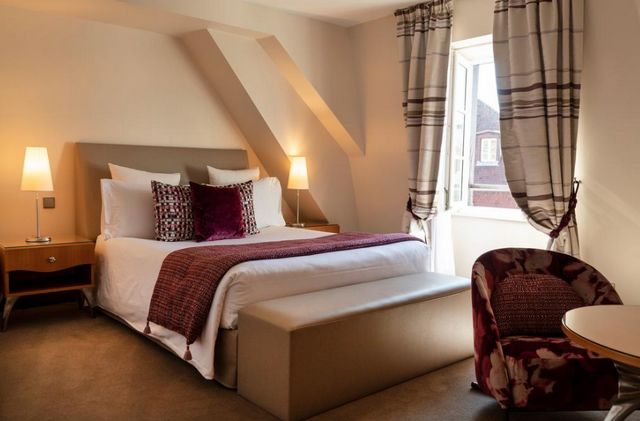 Strasbourg is a French city located in the east of the country, close to a number of Swiss, Belgian and German border cities such as Frankfurt, Luxembourg and Zurich.
The city is located on the banks of the River Ile, one of the tributaries of the famous Rhine, which hosts the headquarters of a number of famous international institutions such as the European Commission and the European Parliament.
To find out more about the location of Strasbourg on the map of France and its location among the most important cities, you can see the following map:

Where is Strasbourg located among the most important cities in France?

Strasbourg is surrounded by a group of the most important major cities in France that are accepted by tourists from all over the world.
In order to save the trouble and the length of the search time, the following lines provide them the distances and routes of arrival from the center of Strasbourg to the centers of these cities.

Where is Strasbourg from Paris?

Strasbourg is 491 km from Paris, equivalent to 4 hours and 51 minutes’ drive across the A4 track.
Or 502 km, equivalent to 5 hours of driving 25 minutes along A4 and N4 tracks.
While the distance between the two cities can be restricted by independent public transportation and arrival within a period not exceeding one hour and 56 minutes.

The distance between Nice and Strasbourg

Nice is 786 km from Strasbourg, equivalent to an 8-hour and 38-minute drive, the A2 route.
The distance between the two cities can be limited by an hour for 15 minutes via Air France, Lufthansa and Volotia, which provides one to two flights per day non-stop.

How far is Strasbourg from Marseille?

Strasbourg is 798 km from Marseille, which equates to 7 hours and 42 minutes driving via tracks A7 and A36. The public bus can be reached within 5 hours 55 minutes.
Or limit the distance and duration by flying for an hour and a quarter via Tunisian Airlines, French and Volotia Airlines, which all provide one to three daily non-stop flights.

The distance between Strasbourg and Cannes

It is 930 km from Strasbourg, which equals 8 hours and 42 minutes driving via the A7 track, or 8 hours 31 minutes using public buses.
The distance between Strasbourg and Cannes is also limited by flying from Strasbourg to Nice for an hour 15 minutes, then by car to Cannes.

Where is Strasbourg from Chamonix?

Chamonix is ​​404 km from Strasbourg, equivalent to 4 hours 27 minutes’ drive via the A35.
Or 421 km is equivalent to driving for 5 hours and 30 minutes via tracks A9 and A35.
The distance between the two cities can be covered by flying within 3 hours 35 minutes.

How far is Colmar from Strasbourg?

The distance between Strasbourg and Annecy

Strasbourg is 428 km from Annecy, the equivalent of 4 hours and 29 minutes driving via tracks A35, A1, or 439 km equivalent to 5 hours driving via A35.
The distance between the two cities can also be covered by pilots within 3 hours 35 minutes.

Where is Strasbourg from Eckersch?

The distance between Penfield and Strasbourg

Strasbourg includes a group of the most important historical and archaeological monuments that attract the attention of tourists coming from everywhere such as the Museum of Modern Art, the Strasbourg History Museum, Gutenberg Square, Strasbourg Cathedral, and other landmarks that you can see via the following link .. Read more

Articles you may also be interested in in Strasbourg:

The 6 best places to shop in Strasbourg, France

The best 6 places to visit in Strasbourg, France