The Alhambra Palace is one of the most famous landmarks of tourism in Granada and is a testament to the ingenuity of Moroccan Murcia art and architecture in the Andalusian era and is one of the most important cultural and historical monuments listed on the UNESCO World Heritage List.
Some historians believe that the reason for the designation is due to the colors of its reddish walls, while others suggest that it was named after the royal family of Bani Al Ahmar who built the palace.
It is worth noting that the Alhambra Palace took more than 150 years to complete its construction, and its first block was laid in the fourth century AH and some of its other parts were built in the seventh century AH.
The Alhambra Palace also has a unique position and a very wide reputation among the tourist attractions in Spain, where nearly 4 million tourists visit it every year from all over the world.
In this report, we answer the most important questions we receive about that wonderful tourist attraction, we will get to know together where the Alhambra is located and how it can be reached from the city center. 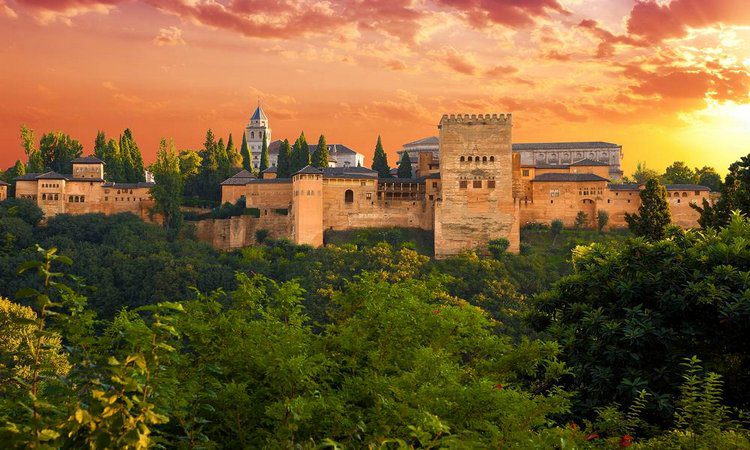 Where is the Alhambra Palace located on the map:

The Alhambra Palace is located on top of the sun hill known as Cerro del Sol in Granada, about 420 km from the Spanish capital, Madrid.
The following map shows exactly where the Alhambra in Granada is on Google Maps:

How to get to the Alhambra Palace:

After we got acquainted with you on where the Alhambra Palace is located, let us now know how to get to it from the center of Granada using various means of transportation:
The Al-Hamra Palace is approximately 9 kilometers from the center of Granada on the shortest A-44 track between them and shown on the map below. The Al-Hamra Palace can be reached by car in 15 minutes, and the bus can be reached in half an hour.

The most important activities in the Alhambra:

Many great activities can be done in the Alhambra Palace, such as wandering in its vast gardens, or visiting the black foyer square and taking the coolest memorial photos, as well as entering the Hall of Kings … Read more

Do you have any other questions about where is the Alhambra Palace located or how to get there? If you have another question please add it via the comment box below and we will answer it as soon as possible.