Learn about Taif, the city of roses and the incubator of Okaz Market

Tourist places in Dhaka .. the paradise of photography lovers!

Report on the Lavender Hotel Sharjah

The 7 best activities in the castle of Suhail Marbella Spain

The Balearic Islands is one of the most important tourism regions in Spain at all, as it is the first tourist destination for many tourists around the world, which is an archipelago made up of four major and major islands followed by a group of small islands.
The Balearic Islands are divided into two parts, the barren islands, which are the three converging islands called Mallorca and Menorca, and the relatively small Cabrera, and the coniferous islands, Ibiza and Formentera.
Mallorca is the capital and largest city of the Balearic Islands. Each of these islands has its own characteristics. Mallorca is distinguished by its natural and geographical diversity, in which it contains rural areas, natural reserves, mountains and beaches, and it also includes a group of the best cultural centers in Europe.
Among the most important places of tourism in the Balearic Islands are the baths of Arab Palma, which belong to the Islamic civilization in Andalusia, “Old Spain” and the Bellver Castle, and also enjoy wonderful beaches where many activities such as swimming and diving can be done.
Below, we will learn together where the Balearic Islands are in Spain and how to get there easily. 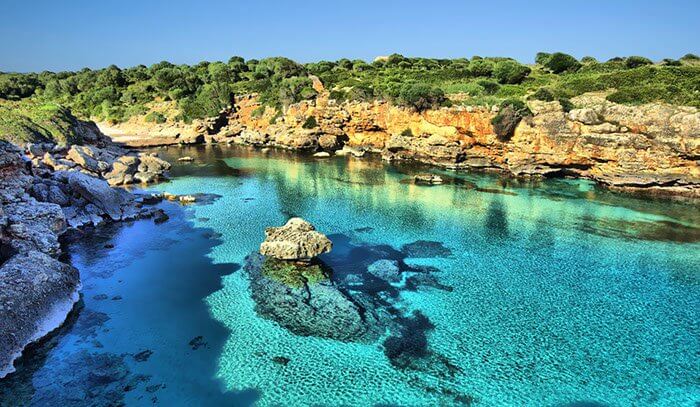 Where is the Balearic Islands of Spain located on the map:

How to get to the Balearic Islands:

Below we’ll look at how to get to the four main islands and how to get around.
You can reach the Balearic Islands by traveling to Barcelona first and then proceeding to the capital, Marioca Island, via flights provided by local airlines to Palma de Mallorca Airport or by departure to the islands of Menorca and Ibza from Barcelona Airport.
From Ibiza Island you can reach Formentera by ferry. Marioca, Menorca and Ibiza can also be reached by ferry from Barcelona.

If you want to visit all the islands and are confused about how to get to all of them without returning to Barcelona, ​​do not worry, ferries are available among them all, only go to Marioca and then Formentera passing through Pisa and finally go to Formentera by boat.

Read:Tourist places in Madrid .. A tour in the capital of the Kingdom of Spain!

Distance between Barcelona and Majorca Island:

The distance between Palma, the capital of Mallorca and Barcelona, ​​is about 255 kilometers, according to Google Maps, and that distance can be covered in just 45 minutes via flights from Barcelona Airport to Palma de Mallorca Airport at a cost of no more than $ 100.
The ferry can also be reached in just eight hours, at a cost of $ 50 to $ 250 (only one trip per day).

Distance between Barcelona and Ibiza Island:

About 533 kilometers, and can be traveled within 55 minutes by plane from Barcelona Airport to Ibiza Airport at a cost ranging between 18 and 95 dollars, depending on the airline, or traveling by ferry in eight and a quarter hours at a cost of no more than 250 dollars.
Please see the following map to know where the island of Ibiza is located and the path between them Barcelona:

Distance between Ibiza and Formentera:

The distance between the two islands is only about 24 kilometers, and can be traveled by ferry in less than half an hour at a cost of no less than $ 6 dollars and is the only means of transportation between them.

Read:Where is Spain located and how to travel to Spain

Distance from Majorca to Menorca:

The number of floors of the Burj Khalifa

The most prominent tourist attractions in Launceston

Bubble Hotel is one of the most beautiful Caribbean islands hotels

What is the capital of Poland