Where is the city of Fez and the distances between it and the most important cities of Morocco?

Where is the glorious city of Fez? An important question whose answer must be known, as the city is one of the most beautiful and breathtaking tourist cities in Morocco, as it is famous for being the cultural capital of the country and the second largest city in terms of population.
The city of Fez is distinguished from other cities in Morocco by the doors and the walls surrounding it, whose origins date back to the time of the amazing Marinian architecture, and among its most prominent doors are the shop doors, openings, peaches and burnt and many other doors.
Within the walls of the city of Fez, unparalleled ancient buildings and nearly four thousand unique fountains, in addition to its old houses, which are characterized by its doors and ornate windows, and its gardens and orchards are omnidirectional from all directions, not to mention the historical mosques that the Andalusian Mosque is one of the most famous.
To answer your questions about the location of Fez and the distances between it and other important tourist cities of Morocco, please complete the reading of our article lines.

The city of Fes embraces a large number of the best luxury hotels in Morocco, in order to provide an unforgettable stay for its visitors, and you can learn some details about this by looking at the comprehensive guide to the best hotels of Fez .. Read more 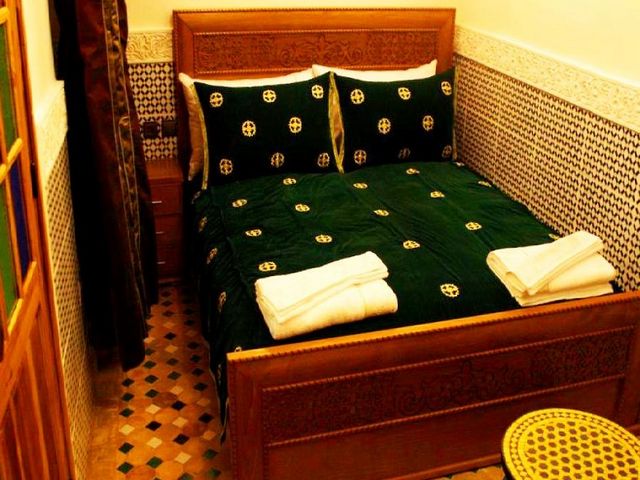 Where is the amazing city of Fez?

The Moroccan city of Fez is located in the north of the country and to the northeast of the Atlas Mountains, and is known primarily for the walls and doors of Fez Bali, and for its diversified scientific and cultural development.
Fez is home to a large number of religious schools decorated with cedar inscriptions and ornate tiled works, dating back to the 14th century AD. Its houses, buildings and markets are full of life filled with the atmosphere of the ancient world.
To find out exactly where the city of Fez is located, you can review the following map

Where is the city of Fez located between the cities of Morocco?

The city of Fez is located in the north of Morocco, and it is in the middle of many of the most important cities in Morocco on the tourism level, and the car can be used to move between it and those cities.
The state of Morocco has provided many common means of transportation to link Fez and other cities, such as flights, buses, trains and taxis.
In the coming lines, we will get to know the distances between Fez and some of the most important and famous tourist cities in Morocco.

Where is the city of Fez located in the capital of Morocco, Rabat?

The distance between Fez and Ifrane

Ifrane is the closest city to Fez, only 64.6 km away, and the distance can be covered within an hour and 7 minutes by car.
Here is the next map showing the distance between the two cities, from which you can use the acronyms.

Where is Fez located from the city of Meknes?

Meknes is 63.8 km from Fez, which is 53 minutes on Highway 2, by car.
By looking at the following map, you can know the exact distance between the two cities.

What is the distance between Fez and Kenitra?

Fes is 201 km from Quneitra, about two hours and 13 minutes from driving via Highway 2.
To know where the city of Fez is located more specifically than the city of Kenitra, please see the following map, which shows the shortest methods used.

The distance between Fez and Casablanca

The city of Fez is 295 km from Casablanca, which is a 3-hour and 8-minute drive away on Highway 2, and from it to Highway 5.
The distance can be shortened via a 55-minute flight from Royal Air Maroc.
It is possible to find out exactly where Fez is located from Casablanca, and what are the ways that lead to it by looking at the following map.

What is the distance between Fez and Tangier

Fes is 302 km from Tangier, and the distance can be covered by 4 hours 17 minutes by car on international road 506 via Kenitra, and even to Highway 1.
Highway 2 can also be used up to Highway 1, via Quneitra, which is the least crowded, for a distance of 398 hours of 4 hours and 6 minutes.

Where is the city of Fez located from Marrakech?

Marrakech is 532 km from Fes, which equates to 5 hours and 35 minutes by car via Highway 2 and from it 5 to Highway 7.
The Royal Air Maroc in Fez also provides flights to and from Marrakesh, which lasts only one hour.

Where is the city of Fez located from Agadir?

Agadir is 756 km from Fes, which is equivalent to 7 hours and 49 minutes via Highway 2 and then 7 by car via Marrakech.
The effort and time can be reduced to an hour and 20 minutes only, by using Royal Air Maroc flights available between the two cities.

It can be said that the city of Fez is one of the cities of Morocco that provide many places and unique historical attractions, and the culture of the city and the legacy of its Islamic past is one of its most distinctive features, along with its traditional markets and ancient buildings that are worth a visit.
It also includes many gardens, parks, religious schools, mosques, and old doors, as well as the south tower, which will give you panoramic views of the city .. Read more