Where is Vietnam located and how to travel to Vietnam

Perhaps you have watched Vietnam in a number of military films, but this does not prevent you from visiting this wonderful country, where the unspoiled nature, ancient temples and rainy beaches enjoy the breathtaking beauty of the rocky islands and beach resorts that are the most important tourist destinations in Vietnam attractive to tourists from all countries of the world .
Discover the wonderful nature and the fabulous caves during your tour in Vietnam, but you should read the following lines, which are a tourist guide for you to know some important things, most notably the location of Vietnam on the map, and the appropriate means of transportation, all of this and more, you will find in the following lines to lift you from the meaning of searching for where the country of Vietnam is located And the distance between the most important tourist cities.

Next to its historical landmarks and charming landscapes, the country of Vietnam includes a large group of luxury hotels and resorts in its 5 and 4 star categories with a wonderful view of the city and green spaces, and provides high-level hotel services, which made it the best high-end hotels in Vietnam, so we will show you a list of these hotels and visitor ratings. Previous Arabs, how to book, offers and prices through .. Read more 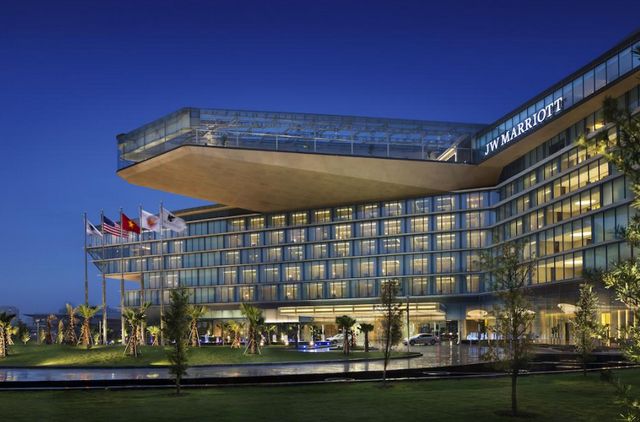 Where is Vietnam located on the map?

Vietnam is a socialist republic in the southeast of the state of Asia and its capital is Hanoi, located in the far east of the Indochina Peninsula, bordered to the north by the State of China and to the east by the Gulf of Tonkin and to the west by Las and Cambodia and the State of Thailand, the dominant language is Vietnamese.
Here is a map showing Vietnam exactly where it is located:

How to travel to Vietnam

When traveling to Vietnam, there are options for obtaining the visa first, which you can request directly from the Vietnamese embassy, ​​or it can be obtained stamped at the embassy and attached with a letter of approval from the Ministry of Immigration in Vietnam and includes the receipt code, and official papers are brought as any country you travel to, such as a valid passport Personal photos, bank statements, and succession.

Distances between the most important tourism cities in Vietnam

After we know where Vietnam is located on the map in detail, we will explain below the distances between the most important tourist cities that you must visit in order to enjoy relaxation in the arms of nature and visit its wonderful landmarks.

Where is Ho Chi Minh City from Hanoi

The distance between the two cities is estimated at 1724 km, which is equivalent to 30 hours traveling by car via the fastest route shown to you on the map. The distance can also be covered within two hours and five minutes by plane from Noi Bai International Airport.

Where is Da Nang located from Nha Trang?

The distance from Da Nan Ghali, Nha Trang city, is calculated in km 534 km, equivalent to about 9 hours and 24 minutes driving, and your flight can be completed by taking off from Cam Ranh International Airport to arrive in just an hour, and you can view the attached map.

Where is Hoi An located on Da Lat?

The distance from Hoi An to Dalat City is estimated at approximately 637 kilometers, which equates to approximately 11 hours and 52 minutes travel by car. You can also reach faster with flights that depart from Lin Hong Airport to arrive in only one hour and five minutes.

Where are you located?

The distance was estimated according to Google Maps at about 1935 kilometers, which is approximately 33 hours traveling by car via Track 13 and is the fastest path for traffic, and there is no other means of transportation except the car between the two cities as shown in the attached map.

Where is Fung Tao located?

The distance from Ha von Ghali Feng Tao is approximately 174, which is approximately 31 hours’ travel by car. You can look at the attached map below, and there is no other means of transportation between the two cities except the car.

Where is Ho Chi Minh located from Ha Fung

The distance between Ho Chi Minh and the city of Ha Fung is about 1783 kilometers, which is about 32 hours traveling by car. You can travel the distance by plane from Cat B International Airport to arrive in just an hour and 55 minutes.

Where is Feng Tao Who is the Tah

The distance between the two cities is calculated at 254 kilometers, i.e. 5 hours and 7 minutes by car.

Where is Sa Ba from Da Lat?

The distance between the two cities is about 1730 kilometers, or about 30 hours traveling by car. You can see the attached map below.

After we know where the country of Vietnam is located and the distances between its most important tourist cities, you can enjoy visiting the most famous historical landmarks and spending the most enjoyable times between the arms of the enchanting nature, and to know more about the most important tourist attractions in Vietnam and its cities, you must visit the following link .. Read more

Where is Algeria located and how to travel to Algeria