The celebrations of the 45th UAE National Day, which falls on December 2 every year, began on the twenty-fourth of this month.

The United Arab Emirates will celebrate this precious occasion for everyone in all seven Emirates, where artistic and heritage exhibitions will be held in addition to celebrating the Martyr’s Day on the 30th of November, provided that heritage activities and celebrations will continue until the fourth of next December.

The seven UAE municipalities also started decorating the streets and squares, to be in their best analyzes in preparation for the National Day as Dubai prepares to open the Union Museum in the site that witnessed the signing of the document on the establishment of the United Arab Emirates in 1971, and the Union Museum will allow all its visitors to learn more about the Emirates heritage Areeq, how was life in the Emirates before the signing of the agreement? And how the state evolved in economic terms.

Governmental entities and national institutions participate in the celebrations of the Emirati National Day. Popular rallies are held, and Al Maryah Island in the capital Abu Dhabi is hosting a huge mass celebration on the occasion of the two-day national day with fireworks displays, police music band, entertainment events, and a carnival march.

On the other hand, many companies presented on this occasion amazing offers such as the theme park Ferrari World on Yas Island in Abu Dhabi, which hosts its visitors for free during this period to celebrate the National Day.

As for Etisalat, it provided a bouquet of various gifts to its Emirati subscribers during the 45 days to 3 December, and also gives them and all residents of the country who have a mobile phone with an Emirati chip the opportunity to use the service “Wi-Fi Emirates from Etisalat” for free from the date of November 30 to December 3 2016 in the main gathering places of the country including shopping malls, restaurants, beaches and parks.

Discounts of 90% in malls in Dubai

Dubai Festival and Retail Foundation launched amazing three-day shopping deals in Dubai to coincide with the 45th National Day celebrations from 1 to 3 December, in shopping malls and retail outlets providing discounts between 30 and 90 percent on a selection of local and international brands in products Fashion, beauty, electronics, toys, furniture, restaurants and more.

In the celebration of the Emirati National Day, the Emirates Palace in Abu Dhabi organizes many heritage and popular activities, as the laser shows illuminate the palace building in the colors of the Emirates flag, while the flags fly over the walls of the palace and its gardens in a festive atmosphere adorned with striking lights that surprise the visitors and visitors.

A huge fireworks display will be launched on Friday and Saturday, 2 and 3 December 2016, which will be held at the sea between the Emirates Palace and the Marina Mall.

Where the fireworks will be launched at 8:30 pm from 65 points in one go, with the aim of establishing one of the largest fireworks exhibitions the UAE has ever seen.

It includes the City Walk event in Dubai, which includes 35 events and 29 international folklore groups, with the participation of more than 25 countries that present their performances, heritage and arts, and includes a peoples’ march that includes 1200 people from all communities residing on the Emirates land, with the participation of 17 groups from 15 sister countries And a friend, who will depart from City Walk, Dubai on the 29th of this month, and tour the various Emirates until her tour in Abu Dhabi ends on December 5.

The event organizers were keen to launch a wide range of family activities on Abu Dhabi hill at Yas Marina Circuit so that the residents of Abu Dhabi enjoyed a fun day full of exciting and entertaining activities, and for the colors of the Emirati flag to celebrate the 45th National Day of the United Arab Emirates in the sky of Yas Island.

In celebration of the country’s 45th National Day, the Wafi Center offers a range of fascinating heritage activities, and the embellishment work started with flags and decorations that spread throughout the center.

The “mosaic” area located on the ground floor hosts various heritage activities, including the handicraft corner where traditional dishes are woven directly in front of the audience, henna tents and the corner of photography in traditional fashion and obtaining instant pictures, and the young lovers will have the opportunity to meet their cartoon characters “Hamada and Hammoud” And take memorial photos with them.

Festival City in Dubai will present a series of events and a concert by Emirati artist Shamma Hamdan to celebrate the 45th UAE National Day.

The celebration of the famous Emirati artist, Shamma Hamdan, the star of the Arab stars program Got Talent, will be held in Festival Bay on Thursday, December 1, from eight o’clock at ten at night.

Roving entertainment shows and falconers’ shows are held throughout the weekend that coincides with National Day, while on National Day – 2 December – special shows are held at the interface of the InterContinental Dubai Festival City Hotel, drawing dazzling light panels on the beautiful façade, and can be seen from the waterfront in the mall. 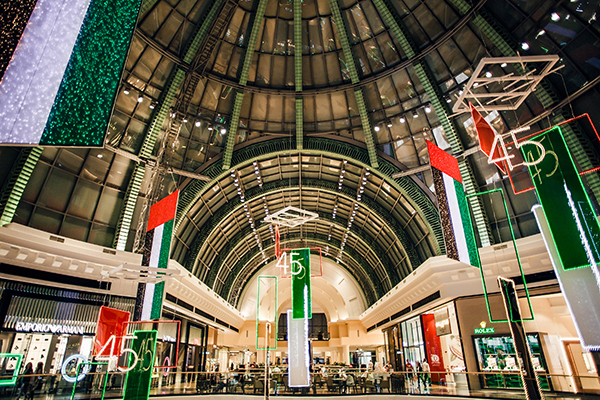 The largest indoor entertainment city in the world celebrates National Day from November 29 to December 3 by offering an entrance ticket of only 225 dirhams, to enjoy all games and recreational facilities, in addition to traditional activities and live shows.

Dubai Parks and Resorts launched the # Pride of the Nation campaign, which will be held annually to celebrate the National Day of the United Arab Emirates, where the entertainment destination will display daily entry tickets at symbolic prices in line with the 45th anniversary of the National Day.

This year, “Dubai Parks and Resorts” will celebrate the forty-fifth national day with 4,500 tickets from “Legoland Dubai” and 4,500 tickets from “Bollywood Parks Dubai” at a price of 45 dirhams per ticket per day from 1 to 3 December, and will be able to Visitors can purchase tickets through the website starting today.

Visitors will also be able to enter the “Riverland Dubai” complex for free without tickets and enjoy the shops, restaurants and entertainment destinations it hosts. The Riverland Dubai complex will be covered with a festive celebration on the forty-fifth national day of the United Arab Emirates, where many traditional activities such as henna painting, traditional dance, horse riding and falconry will be spread throughout, in addition to boat tours that will be decorated with national colors.

As for the activities of cultural centers, it includes more than 194 different activities in 9 centers spread throughout the UAE that include programs for heritage and folklore, competitions for innovation, variety, cinematic shows and cultural trips to heritage places, in addition to the city of the happiest people and dozens of other events.

As for the global folklore program organized by the Ministry of Culture for this year and the participating countries, it comes with the participation of more than 25 countries to present offers at all the cultural centers affiliated with the Ministry and the commercial center in Abu Dhabi, Dubai, Al Ain and Sharjah over the days of the celebrations.

In Abu Dhabi Corniche today, the activities of Yasalam entertainment festival, the most varied, will be held simultaneously with the hosting of the Formula 1 race and National Day celebrations every year at the same time.

This festival includes many interesting and interesting events and shows that include races and movie shows in addition to art and culture, which suit all ages.

In Al Wathba region, the Sheikh Zayed Heritage Festival will also be held today on the occasion of the Emirati National Day, offering a comprehensive view of the national heritage through the “Memory of the Nation” pavilion, which is considered the most prominent activities of the festival with its pictures and historical documents, in addition to the pavilion of the “Patriots Corner”, which is An exhibition that tracks the stages of the development of the armed forces, and honors the biography of the righteous martyrs, while the official celebration of the UAE National Day takes place on December 2 at Zayed Sports City in Abu Dhabi at 4 pm. 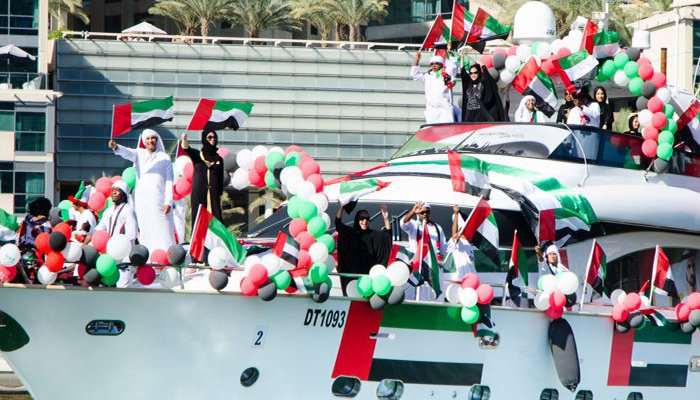 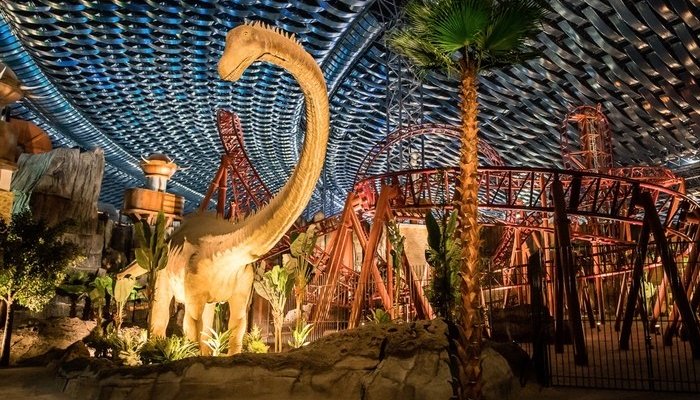 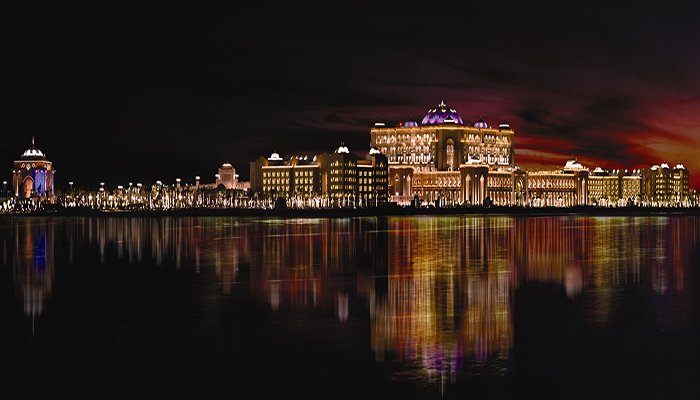 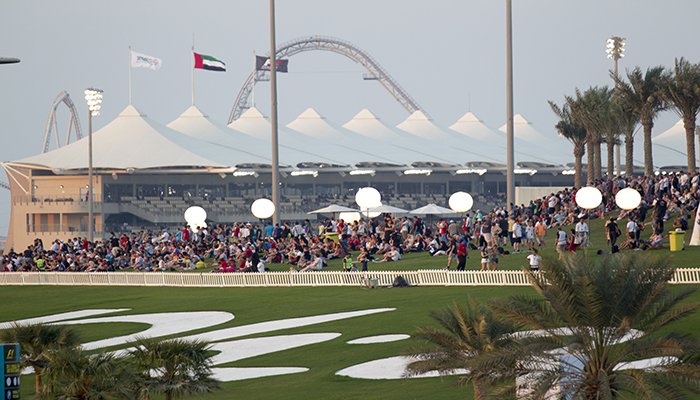 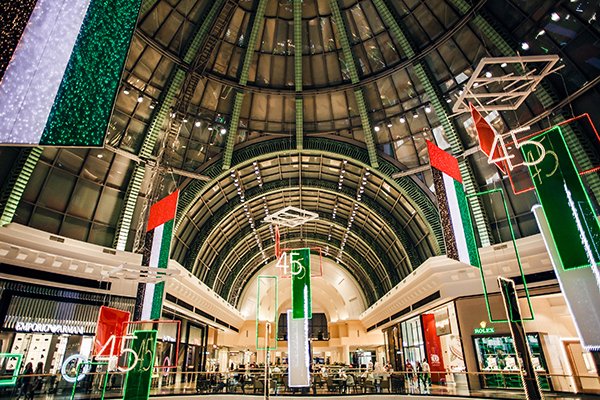 Mall of the Emirates .. Celebrates the 45th National Day 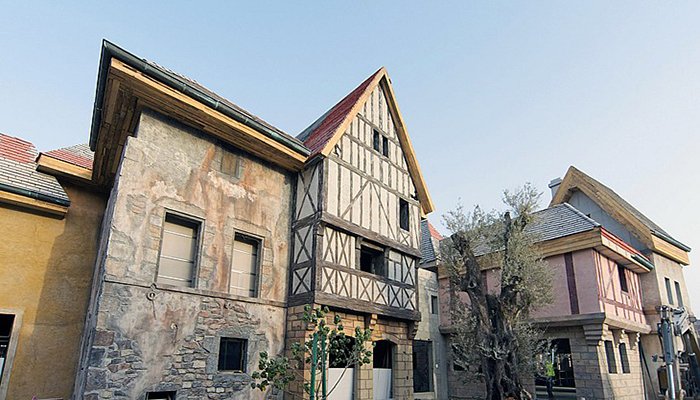 The most famous public parks in Dubai