Learn the most important things that Bahrain is famous for

Bahrain owns a group of stunning beaches.
Bahrain is made up of a number of islands.
Bahrain is famous for its abundant birds, both domestic and migratory, such as flamingos, falcons, and rare birds.
Many restaurants in Bahrain are affected by Indian cuisine.
Shawarma is the most famous food in Bahrain.
Bahrain consists of 33 islands and an area of ​​760 square kilometers.
– The capital of Bahrain, Manama, is the most famous island.
The history of Bahrain dates back to the Roman era.
Bahrain was ruled by various powers, such as the Persians, the Carmatians, the Aounists, the Portuguese and the Omanis.
Every city in Bahrain has its own character.
Manama is the capital of Bahrain and has been inhabited by a number of civilizations for thousands of years.
Bahrain is famous for its skyscrapers.
It is famous for the Bahrain fort located in the west of the capital, which is a Portuguese castle that was established 4300 years ago.
Al-Fateh Mosque is the largest mosque in Bahrain. It can accommodate about 7,000 people. Its history dates back to 1987 and is one of the most beautiful mosques in the country and is famous for its large dome.
Manama market, Bahrain’s most famous market.
Muharraq is one of the most famous cities in Bahrain, with the Bahrain International Airport located.
Bahrain was famous for making pottery and many earthenware was extracted from ancient burial sites.
– Bahrain National Museum is one of the most famous sights in Manama and features a sea view.
Bahrain National Theater is one of the largest theaters in the Middle East, with an area of ​​12,000 square meters and the number of its seats exceeding 1,000.
The Bahrain harbor dates back to the sixteenth century and is a UNESCO World Heritage Site.
Bahrain is known to have a Shi’a presence of 70% of the remainder of the year.
– Mountains abound in Bahrain, the most famous of which is the Mountain of Smoke, which has a height of 134 meters above sea level.
Bahrain is famous for its oil production, which constitutes about 70% of national income.
There are the largest aluminum companies in the world.
Bahrain is the largest island.
The natural resources in Bahrain are as diverse as natural gas, petroleum, oils, fish and aluminum.
The majority of the population lives in cities, as cities have about 92% of the population and 8% in the countryside.
Arabic is the official language of Bahrain.
The people of Bahrain are famous for speaking several languages ​​such as Urdu, English and Persian.
The Arabs represent the largest percentage in Bahrain, then the Iranians, and other races.
Bahrain is connected to Saudi Arabia with a bridge of 25 kilometers in length.
Bahrain is known for its free climate and high humidity.
Camping in the desert is one of the most beautiful leisure activities in Bahrain.
– There are many places to ride horses in Bahrain, the best of which is the Shukoora Horse Riding Center.
– The water parks in Bahrain attract children greatly. 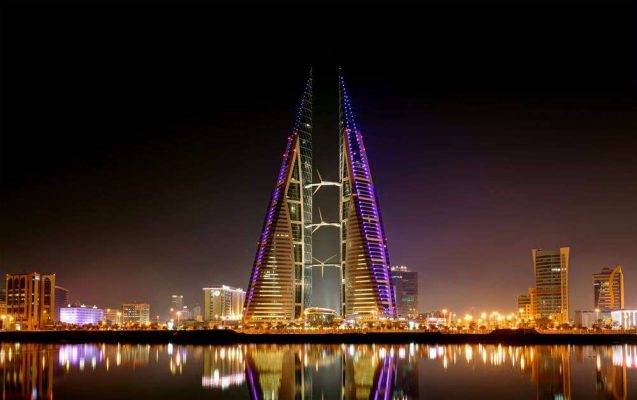 Golf courses spread in Bahrain significantly.
Islamic architecture is clearly visible in the streets of Bahrain.
The House of the Qur’an is one of the most famous monuments in Bahrain.
Bahrain Commercial Center is well known for its electricity production and its height reaches over 29 meters.
– Bahrain became famous for its flag, which was the largest in the world, and set a record in the Guinness Book of Records, reaching a length of 169 meters and a width of 97 meters.

Find the best hotels in Bodrum during the winter

Here are the best places you can go to in Kabala, northwestern Azerbaijan