The most beautiful cities in Germany

Germany is among the wonderful tourist destinations as it enjoys a picturesque nature and a moderate climate, as well as an advanced infrastructure and transportation network, as it is rich in various tourist attractions such as museums, churches, gardens, palaces and castles in addition to family parks, music festivals and many other recreational places. The German cities are distinguished from each other, as each one has its own character and competes with each other for the top of the list of the most beautiful cities in Germany. 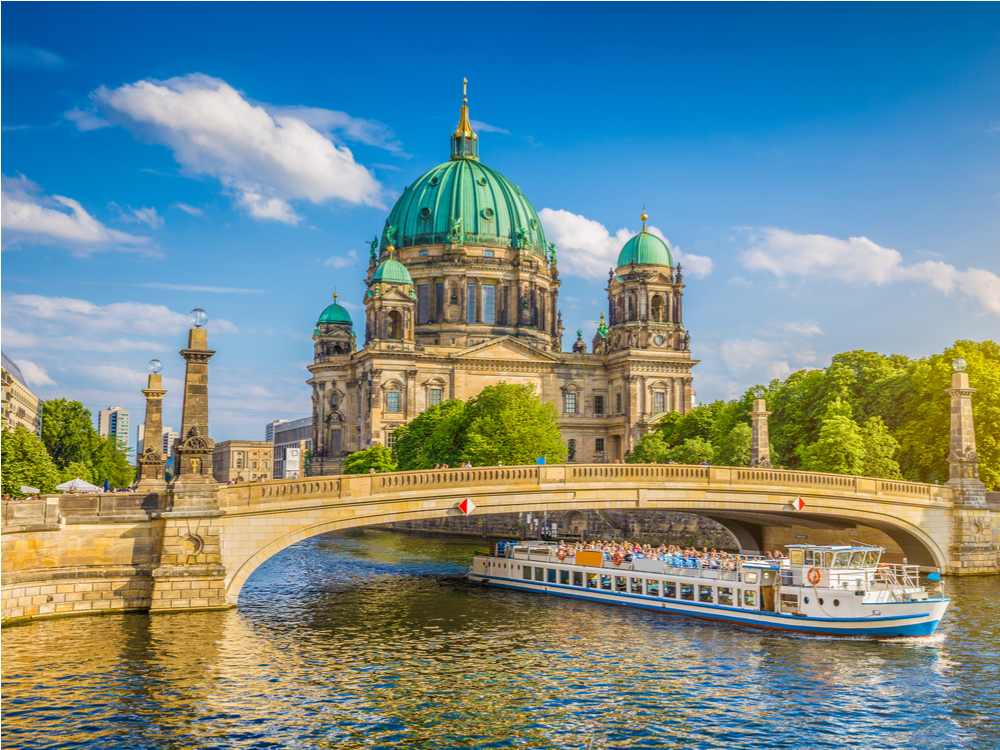 A ferry on the Sprei River along the Museum Island in Berlin
It is the capital of Germany and its largest city in terms of population. It is also the largest city in the European Union. The city is distinguished by its famous buildings that witness to its ancient history, especially those dating back to the era of the Kingdom of Prussia and the German empires, as well as the period of the division of Berlin, and we mention the Brandenburg Gate, the Church of Berlin, the Reichstag building, the remains of the Berlin Wall, the Charlottenburg Palace and other beautiful monuments. Berlin also boasts many impressive cultural facilities with over 500 museums and galleries. 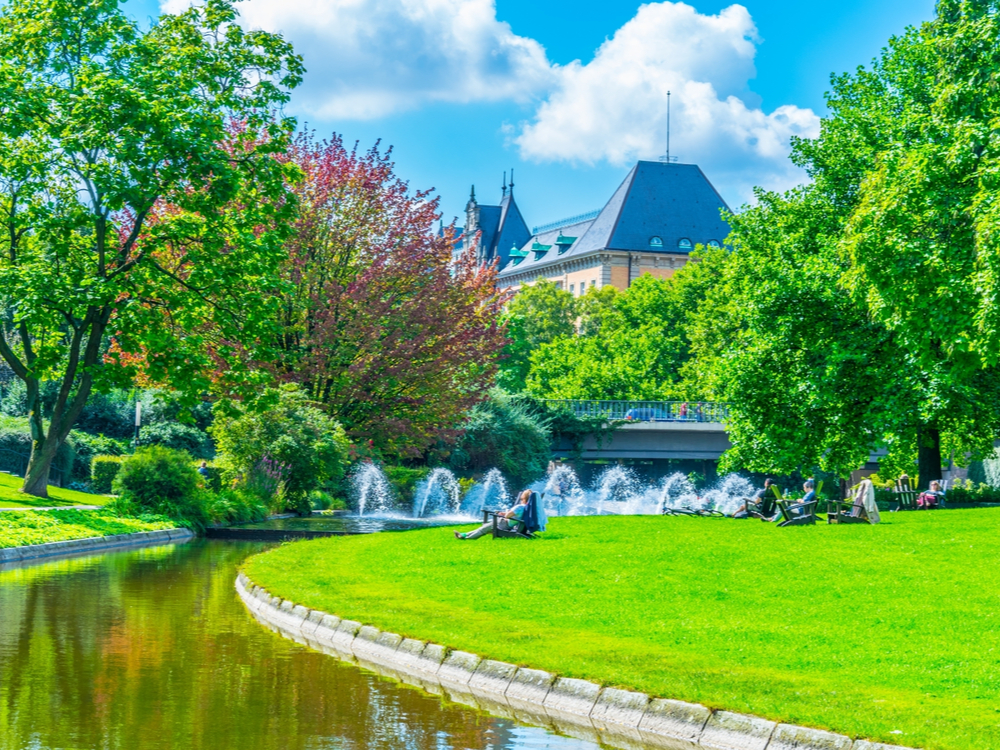 It is located on the River Elbe, which is the second largest city in Germany and the sixth largest city in the European Union. It is known for its wonderful canals and bridges, which outnumber the canals of Amsterdam, London and Venice together. It was named after the first building built in the region in 808 and was a castle of Emperor Charlemagne. In addition to being an economic and financial center, Hamburg is one of the cities that are interested in culture, art, science and literature, as universities, institutes, opera houses, cinemas, museums, research centers and libraries abound, especially in the “St. Pauli” area near the port. 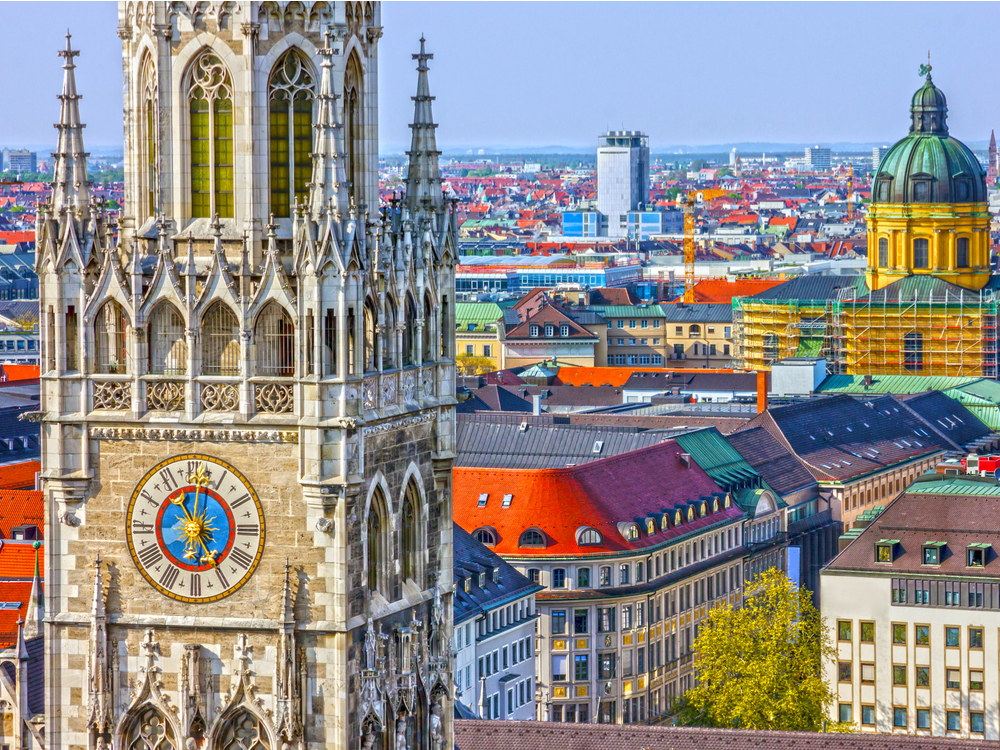 The famous Glockenspiel watch on Marienplatz
It is located in southern Germany, which is the third largest city and the capital of the state of Bavaria. It is characterized by an important strategic location, as it is concentrated in central Europe near the Alps. Munich visits more than 3 million tourists every year because it is an important cultural and artistic center as it contains museums, galleries, universities and centers interested in literature, cinema, music, painting and sculpture, in addition to wonderful tourist sites such as famous squares, gardens, churches and palaces such as the Palace of Hospitality, which was built in 1385 and which contains the most beautiful European decors from the Renaissance, Baroque, Rococo and Neoclassical periods. 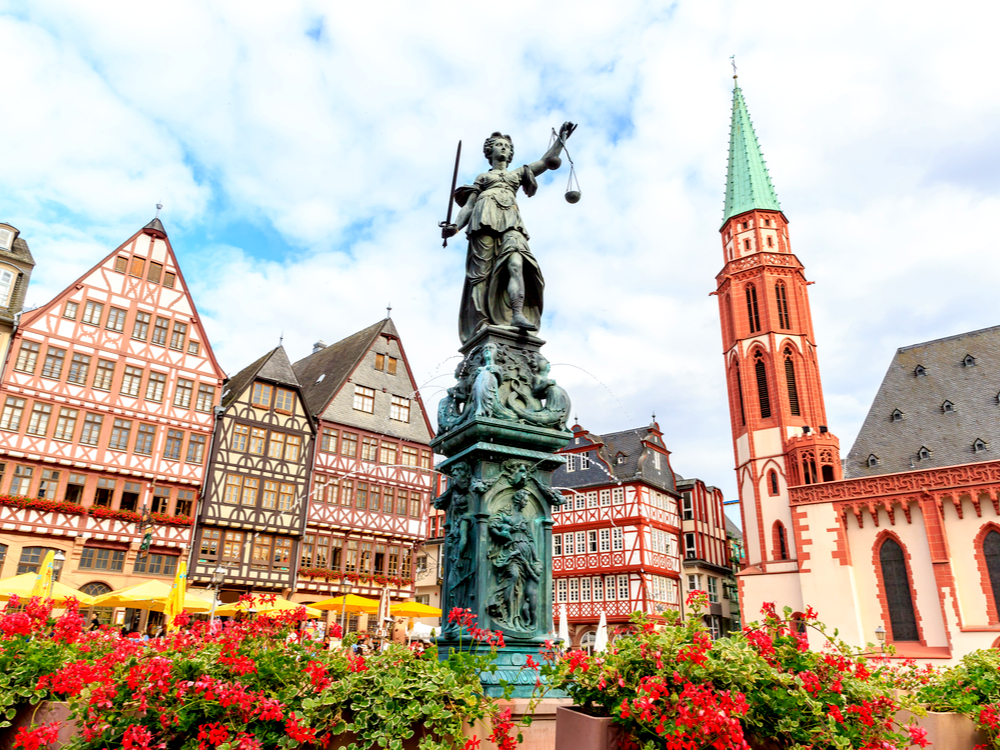 The statue of Justitia or Our Lady of Justice at the Fountain of Justice in Frankfurt
It is located in the west of Germany, on the banks of the River Main in Hesse. It is called the City of Money and Business, which is the economic capital of Germany because of the presence of the headquarters of many companies, banks, the Stock Exchange and the European Central Bank. The Main River divides the city into two parts. The eastern part includes the old city, which still retains some of the monuments witnessed to the medieval architecture, while the western part includes the new city that houses the headquarters of major financial institutions that are famous for their huge and modern buildings. The city houses many museums, most of which congregate in an area called the Museum Quay. 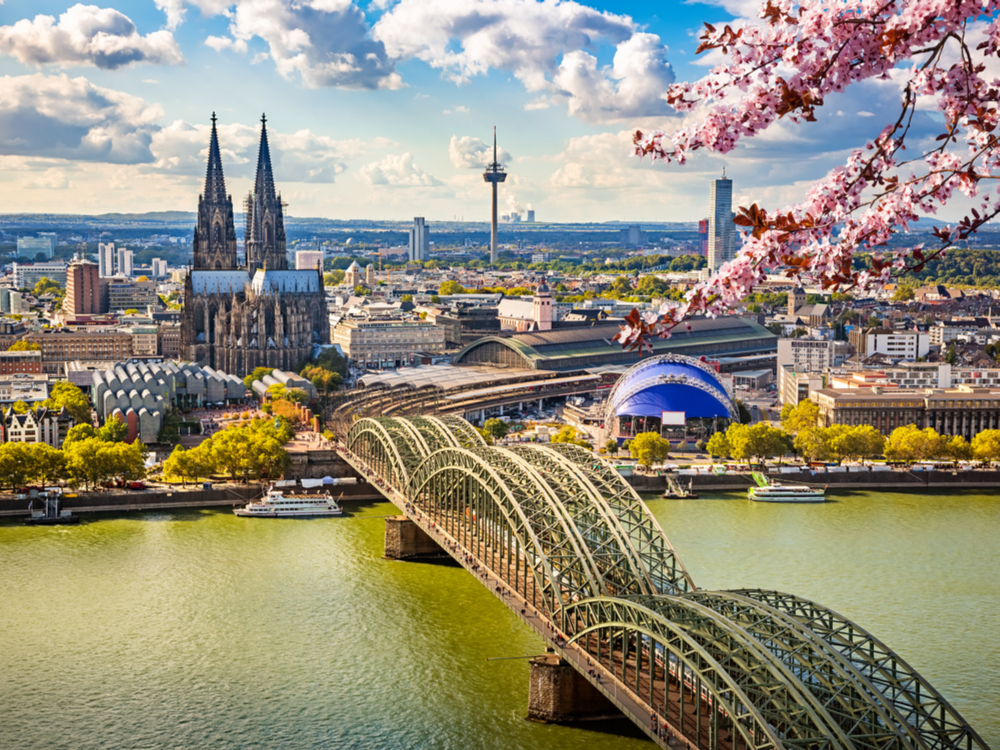 Hohenzollern Bridge and the famous Cologne Cathedral
West of Germany is located on the River Rhine between the cities of Bonn and Düsseldorf, and is full of many tourist and historical attractions, and the most beautiful of these places is the Cathedral of Cologne, which dates back to the Roman era and is listed on the UNESCO World Heritage List, the Romanian Germanic Museum, the Martin Church, the Chocolate Museum and the town hall. One of its most important cultural events is the Rhine Masquerade Festival, which is held annually in February. 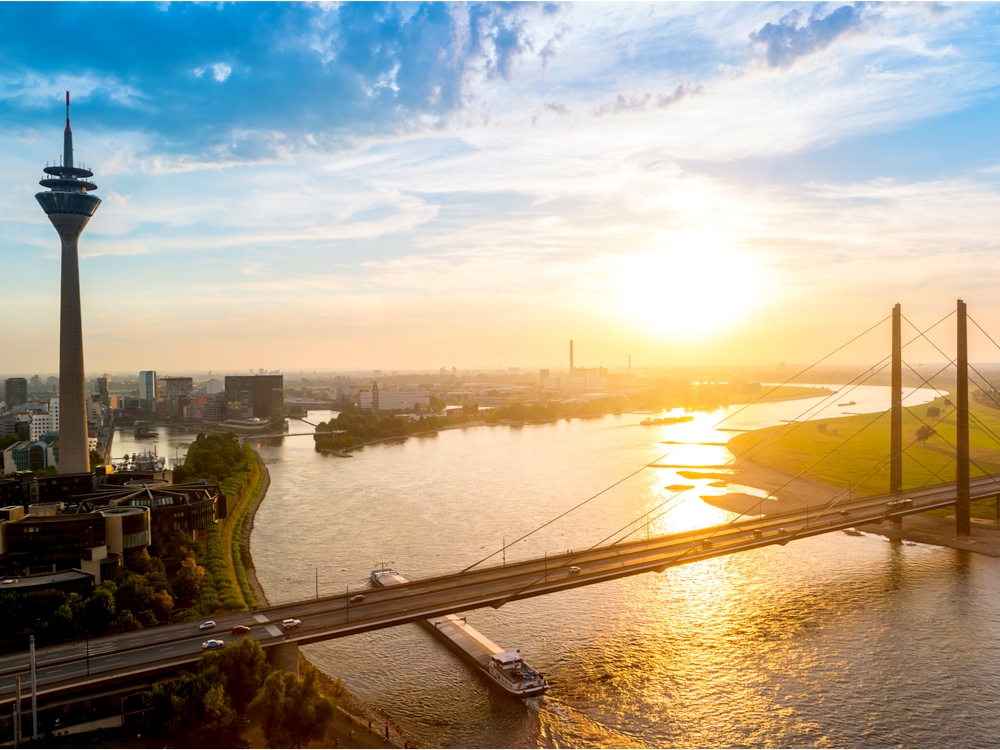 Rhine Tower on the River Rhine in Dusseldorf
It is the capital of the state of North Rhine-Westphalia, and is characterized by its character that mixes the old represented in the factories and traditional buildings, and the modern that stands out in contemporary architecture, as the city is famous for the largest fashion trade fair in the world, in July every year Dusseldorf visits more than 4.5 million A tourist to attend this exhibition, which is one of the most famous recreational exhibitions organized in Germany. The city is also famous for Konigsallee Street or Kings Street for shopping, which includes the most luxurious shops in the world. 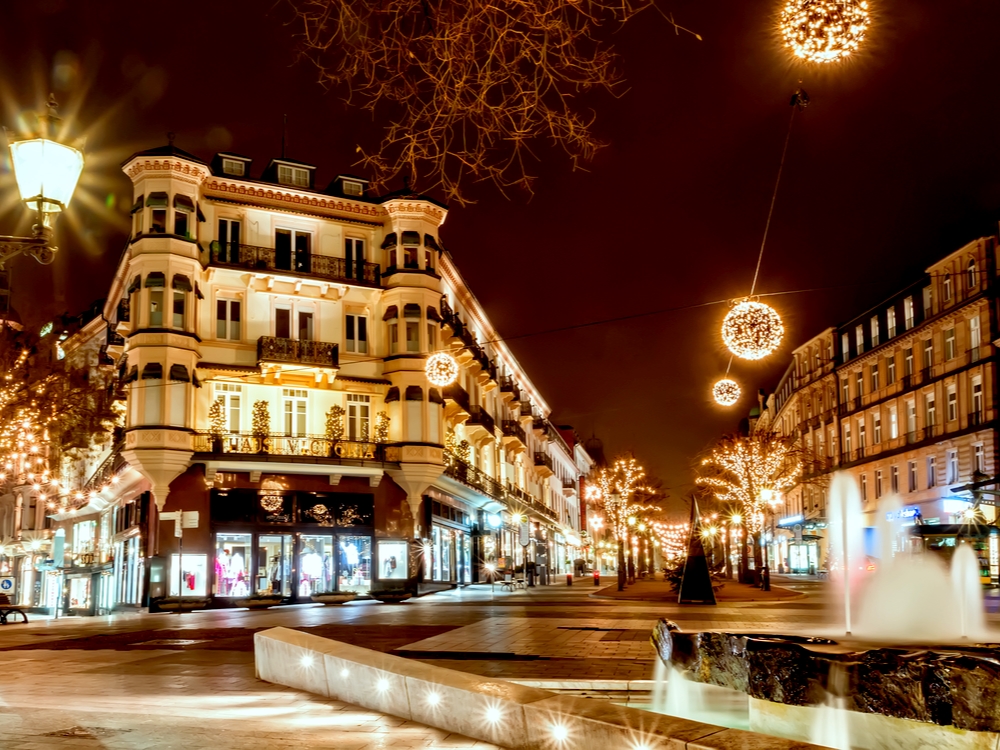 A German town located in the northwest of the Black Forest, it is one of the most famous health resorts in the world and one of the most beautiful German tourist cities. It is famous for the mineral water springs that the Romans used nearly two thousand years ago. The city includes many tourist attractions that attract tourists from all over the world, and these places include Roman baths and natural places such as the magnificent Lake Mummelsee, the Berg Hahnbaden Castle, the flower garden, the Faberge Museum, the Baden-Baden Theater, and the Moorkerbahn Cable Car. 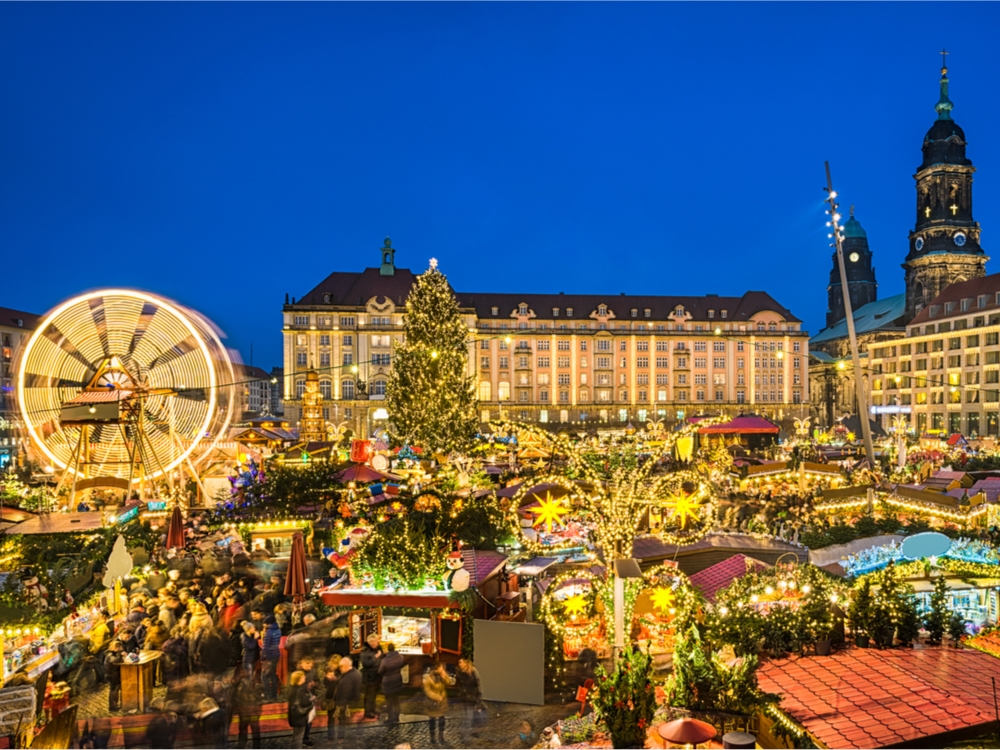 Christmas market in Dresden
It is the capital of the state of Saxony, and it is known by the nickname “Florence River Elbe”. It is located on both banks of this river, and not far from the capital, Berlin. It is the third largest city in East Germany, and it has many parks and cultural monuments along the river, in addition to many artistic treasures that qualified it to enter the list of UNESCO World Heritage sites in 2004. The architectural mix of the city represents the reality of the restoration witnessed after the Second World War, as it took place Rebuilding large portions of it to return to its previous era in magnificence. 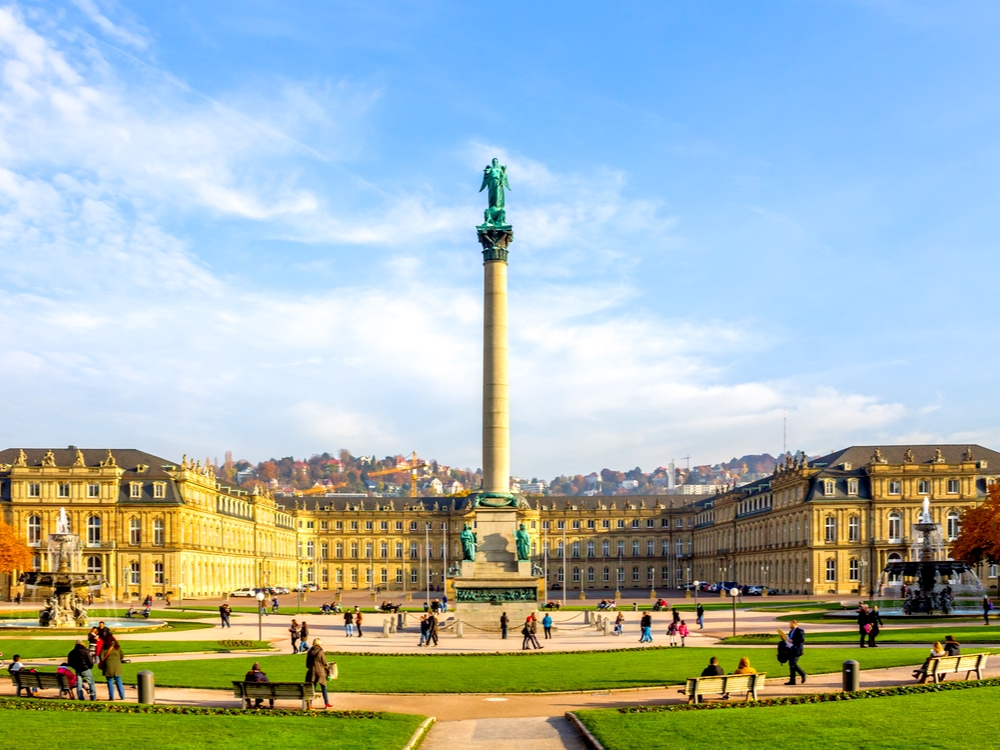 Schlossplatz Square, Stuttgart’s largest square.
It is the capital of the state of Baden-Wuerttemberg and about an hour away from the Black Forest in southwestern Germany and is the sixth largest city, ranking first in the general standard of prosperity among all cities of the country, and is characterized by modern architecture. Visiting the city remains a dream for all car enthusiasts, as the Mercedes-Benz Museum and the Porsche Museum are among the most important tourist attractions in the city, in addition to other landmarks such as the new palace, art museum, Max Ethc Lake and Wilhelma Zoo and Flora. 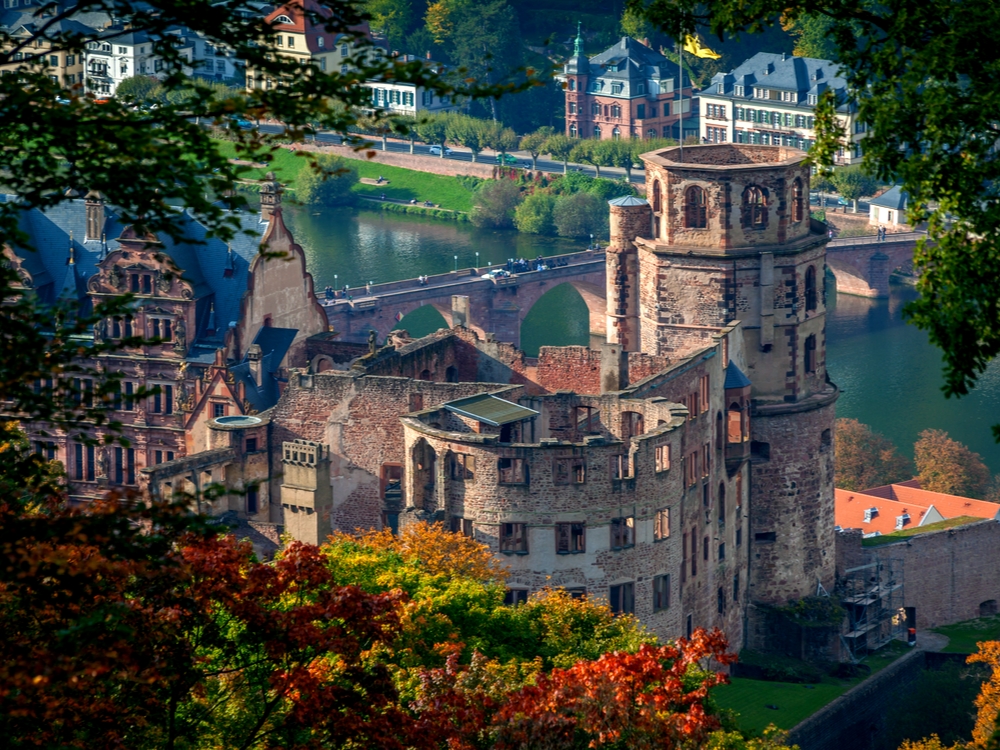 Heidelberg Castle opposite the Neckar River
It is a city located in southwestern Germany in the state of Baden-Württemberg, through which the Neckar River passes and is characterized as one of the few German cities that were not destroyed in World War II, which makes it abounds to this day a lot of the charm of the ancient world. It is considered one of the most beautiful cities in Germany, with its narrow cobbled streets, and the city center built on the style of Baroque architecture that embodies the period of the German romantic intellectual movement in the eighteenth century. The city is also famous for its views of the ruins of the famous Heidelberg Castle, and contains the oldest university in Germany, and tourists in Heidelberg enjoy wonderful views such as the old bridge that crosses the Neckar River, as well as the famous promenade of philosophers.