The most beautiful hidden islands in Italy

Everyone has heard of famous Italian islands such as the ancient island of Sicily, the beautiful island of Sardinia and the trendy island of Capri, but when it comes to the charming islands, Italy has a lot to offer, in addition to its famous islands such as Sicily, Sardinia and Capri, there are dozens of other wonderful Italian islands that many do not know, The truth is that there are more than 350 islands within the Italian territorial waters, and better yet, you do not need luxury sailing boats or luxury yachts in order to reach them, it is enough just to take one of the ferryboats from Sicily to reach a large number of these mowers You can enjoy fresh breeze, warm sunshine and clear water.

Let’s get to know a group of hidden Italian islands that many people don’t know: 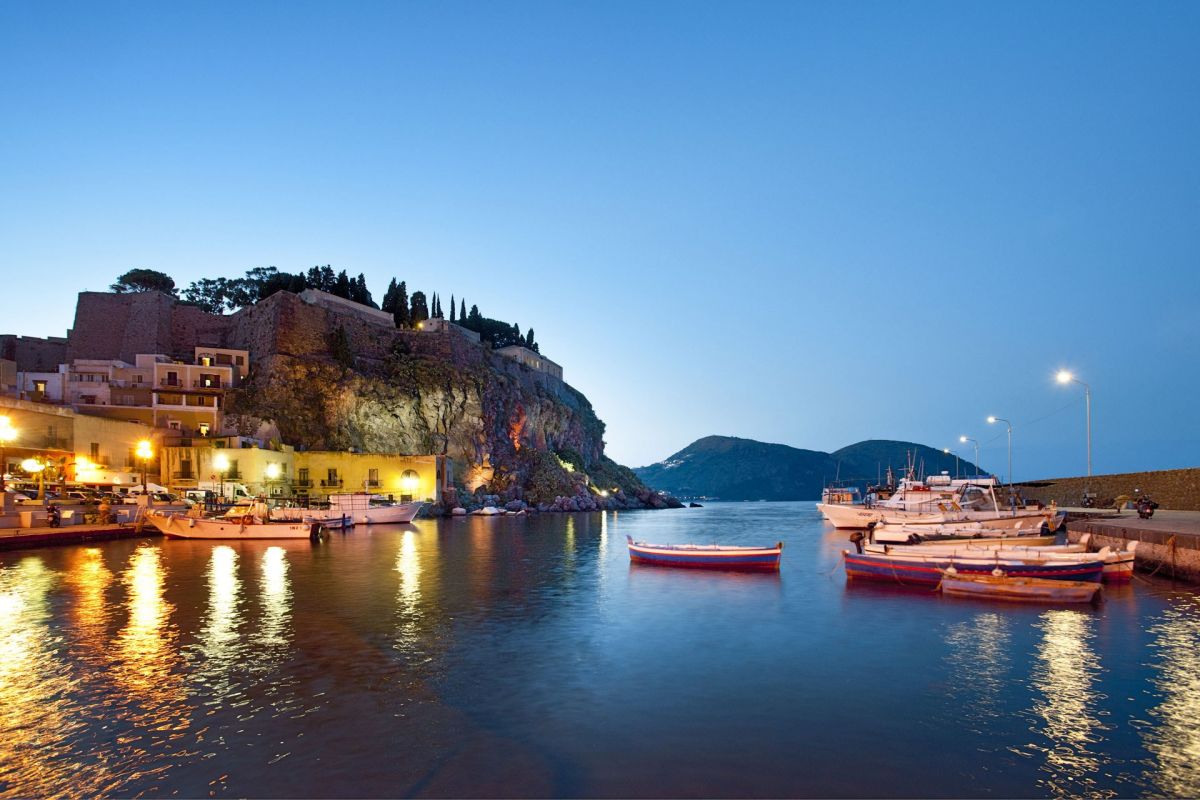 It is one hour away by ferry from Sicily, where the ferry takes you to the small “Aeolian” islands chain and from there to the largest islands of this size chain, which is “Lipari” island, the main city on this island also bears the name “Lipari” which is a beautiful city and is an ideal place to spend A quiet relaxing holiday, one of the most famous tourist areas in this city is the “Corso Vittorio Emanuele” area, in which you will find many beautiful shops, cafes, ice cream parlors and ice cream parlors, and this region is a great place for wandering on foot and you can go from where to the port Marina Corta ”where anglers gather to sell what They caught fresh fish throughout the day.

You can rent one of the “Citroen Mehari” cars and use them to go on an exploratory tour around the island. You can stay in the wonderful “Villa Meligunis” which overlooks the city of “Lipari”. The cost of staying in a double bed room or two single beds starts from $ 80 Breakfast included. 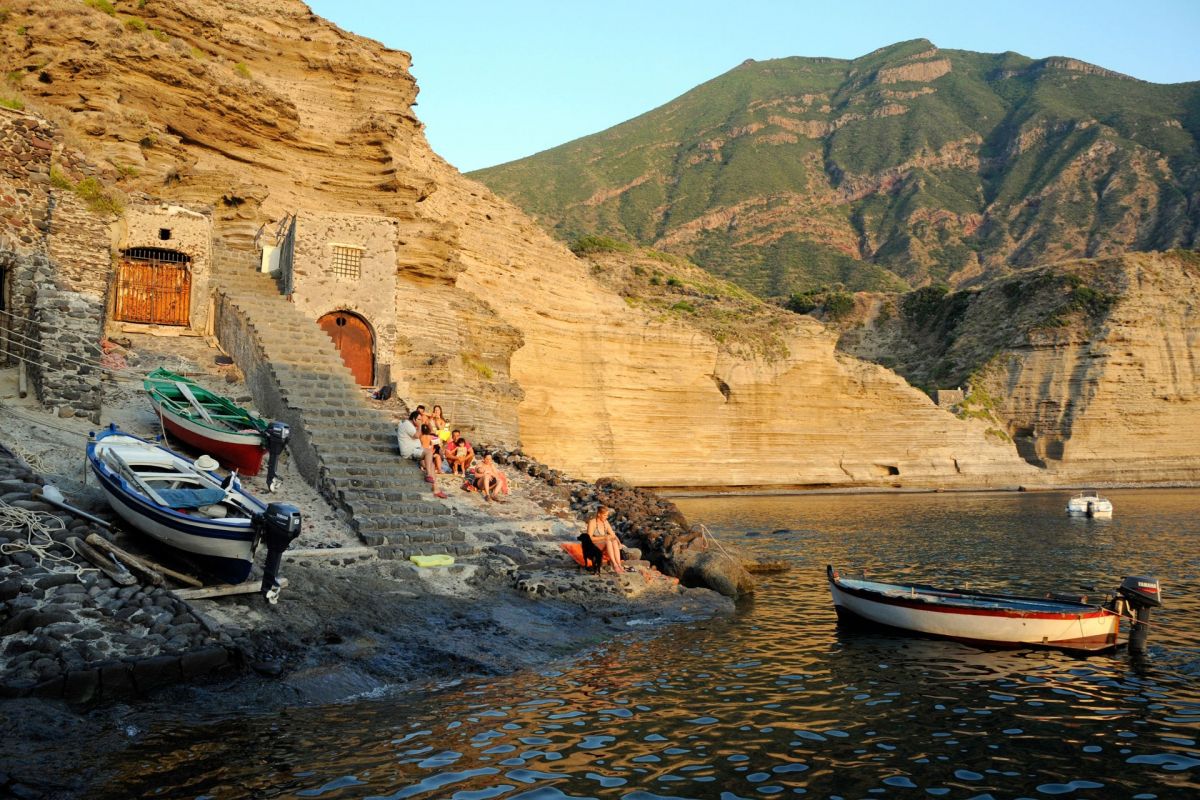 This beautiful volcanic island is a 45-minute drive away from the ferry “Lipari”. This island is famous for being one of the lush green islands that contains many vineyards, citrus trees, capers, this island also was the place where the famous Italian movie was shot. Postino ”.

You can rent a scooter and go for iced drinks at the “Da Alfredo” cafe that is in the village “Lingua” on the island, or you can go to visit the small coastal town of “Pollara” where the movie “Il Postino” was filmed, and there you can also spend time on one of the beaches Beautiful rocky village and diving or swimming experience, and if you want to go after a meal, you can go to “Al Cappero” restaurant, where the delicious local foods that the Aeolian Islands are famous for include potato salad, tomatoes, capers and herbs, and you can stay at the Signum Hotel In the village of “Malfa” on the island “Salina” where you can see a The active volcano which is found in the “Stromboli” island, the cost of accommodation in a double bed room or two single beds starting from $ 100 and include breakfast. 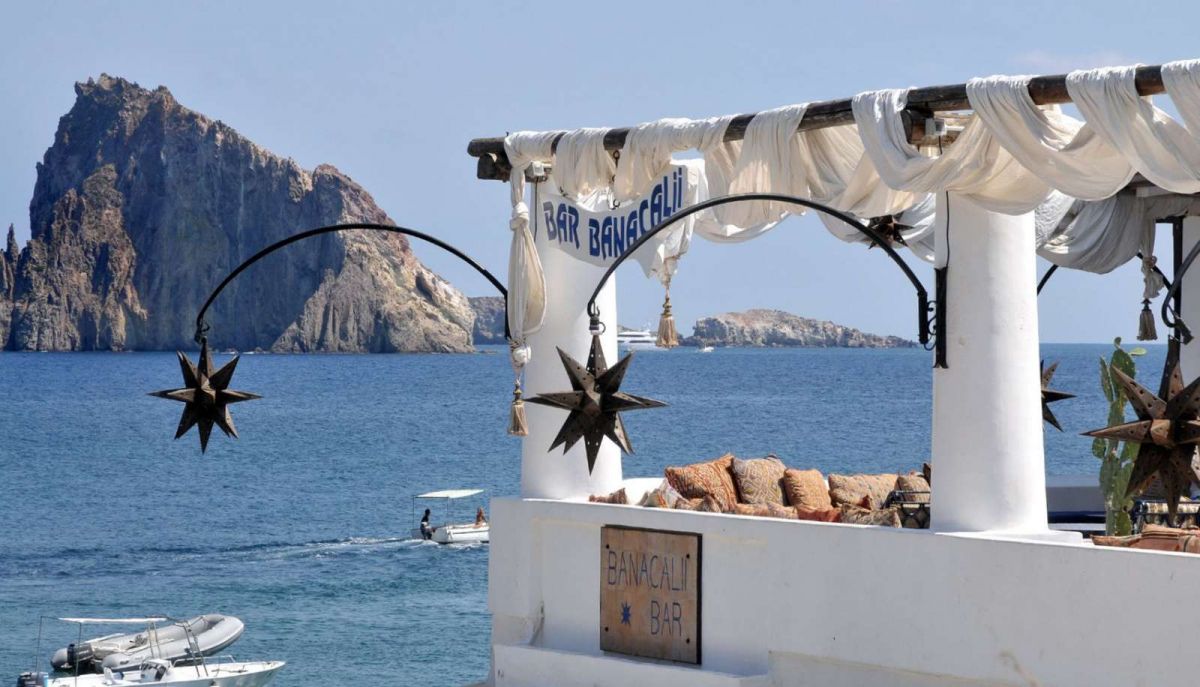 There is an aura of magic and beauty surrounding this island, which is an hour and a half away by ferry from the town of Milazzo in northeastern Sicily, this island belonging to the group of “Aeolian” islands, contains a population of no more than 400 people, and is one of the favorite tourist destinations of many Celebrities who visit on board their luxury yachts include Beyonce, Bill Gates and Uma Thurman.

Do not forget to bring walking shoes so that it helps you to walk around for long hours on foot to explore this beautiful island that cars are not allowed to enter, and also do not forget to bring elegant shoes and clothes with you until you go to clubs tonight on the island, including “Il Bar del Porto”, no There are cars on the island, but the locals use golf carts or Italian three-wheeled carriages to move around. You can also rent a wooden boat and go on a cruise to explore the caves surrounding the island, and the two small islands near the island are “Basiluzzo” and “Lisca” .

The island “Panarea” contains many wonderful restaurants, including the “trattoria Da Paolinois” restaurant, which is famous for serving delicious local foods, including an eggplant pasta dish. You can stay in the “Lisca Bianca” hotel near the main main port on the island, which is a wonderful hotel overlooking the sea, which is It contains 28 hotel rooms, each of which differs from the others. Some of these rooms have a spacious terrace. The cost of staying in a room with a double bed or two single beds in this hotel starts from $ 110.

Often you will find no one who knows about the “Egadi” islands chain except the locals and tourists who enjoy solar baths and delicious seafood. The “Egadi” island chain includes three islands located off the western coast of Sicily, which are “Favignana”, “Levanzo”, “Marettimo” and the last It is the most charming and beautiful of the three islands, and it is just over an hour by ferry from the city of Trapani, west of Sicily.

Don’t forget to visit the “ristorante Il Veliero” restaurant that divides the locals as the best lobster soup in the world, in addition to that the restaurant offers many other delicious local foods, and there is “Marettimo Residence” which is a wonderful place to stay characterized by its simplicity and hotel rooms Comfortable and varied between small rooms and small hotel suites with a private terrace overlooking the sea. 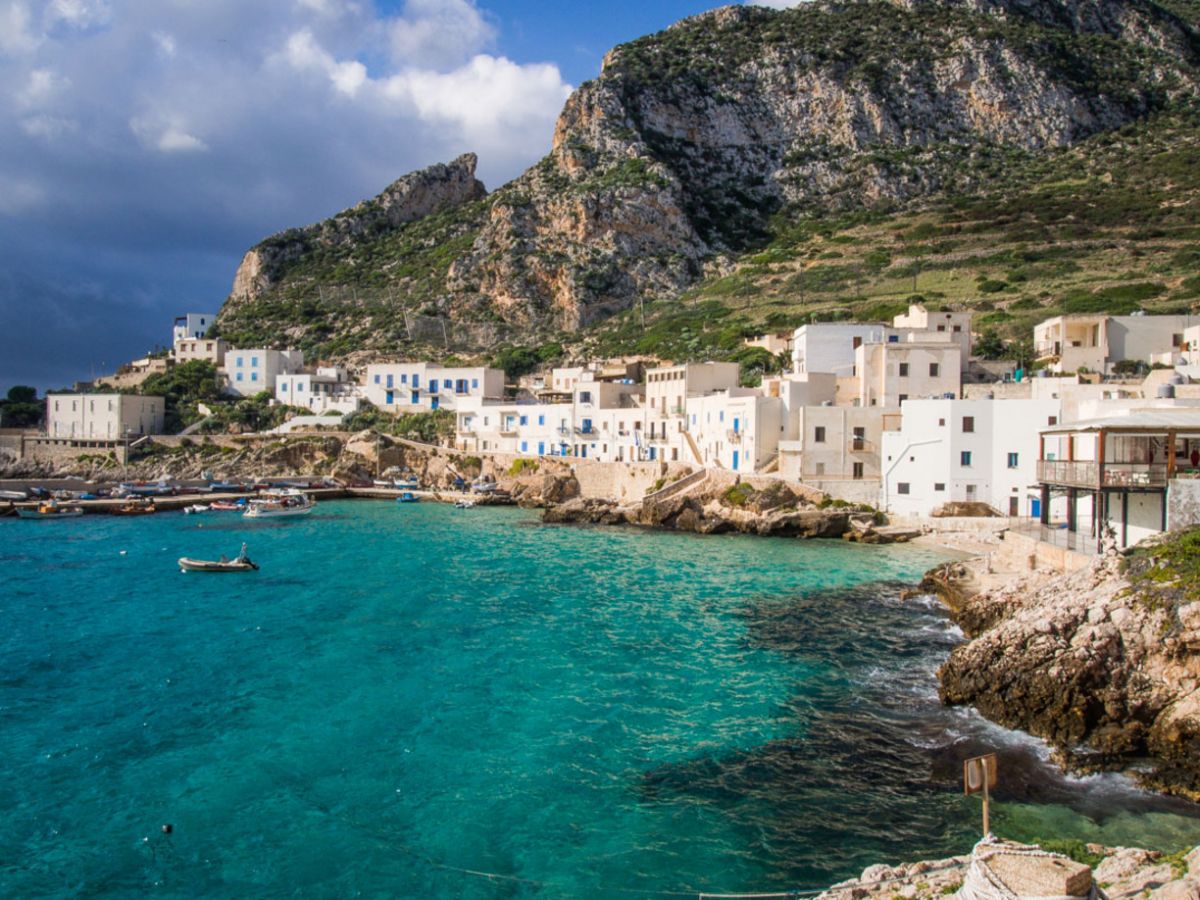 It is an hour and a half in the phrase from the city of Trapani near the city of Palermo, the island “Favignana” is the largest and most famous chain of islands “Egadi” During the summer season, especially in the months of July and August, you will find that the island is full of Italian vacationers, who enjoy spending time on the beautiful beaches on the island It deals with ice cream and ice cream. In the summer season, you will find that the island’s beaches are almost empty.

Do not forget to rent a scooter to go on an exploratory tour of the island, after which you can rent a boat to explore the rocky coast of the island where you can see a number of luxury yachts moored, try also going to the “Cala Rossa” bay, which many Italians go to swimming and get sunbathing You can also rent a speedboat and go on a quick marine excursion. You can stay at the “Cas’almare” hotel which is located by the sea and 15 minutes by scooter from the main town on the island. This hotel is the only luxury hotel on the island and the cost of staying in a room with Double or clinical bed Two singles start at $ 180, including breakfast. 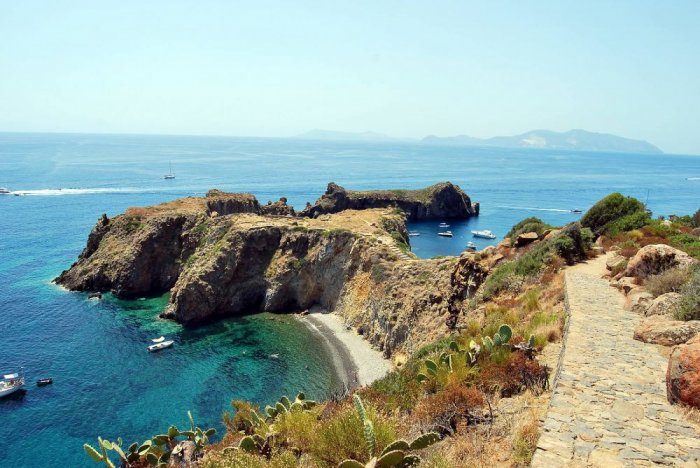 There is an aura of magic and beauty surrounding this island, which is an hour and a half away by ferry, from the town of Milazzo in northeastern Sicily 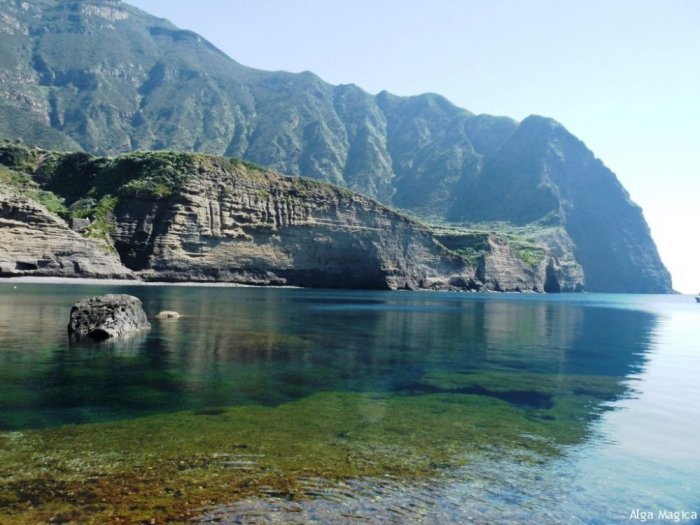 This beautiful volcanic island is 45 minutes away by ferry from Lipari Island, and this island is famous for being one of the lush green islands

It is an hour and a half away from the city of Trapani, near Palermo. Favignana Island is the largest and most famous of the Egadi Islands chain. 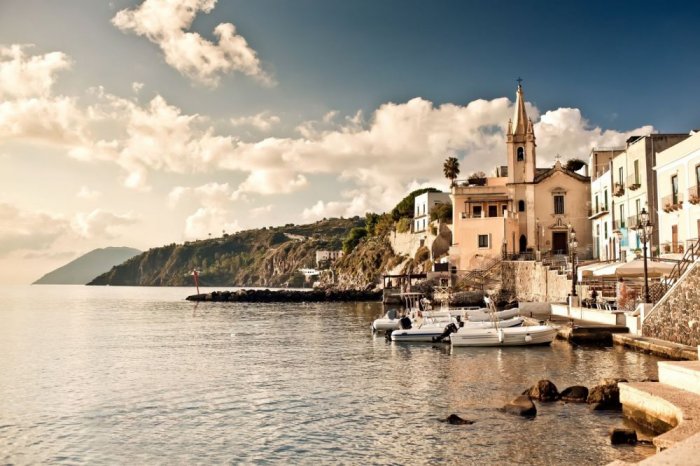 It is 1 hour away by ferry from Sicily 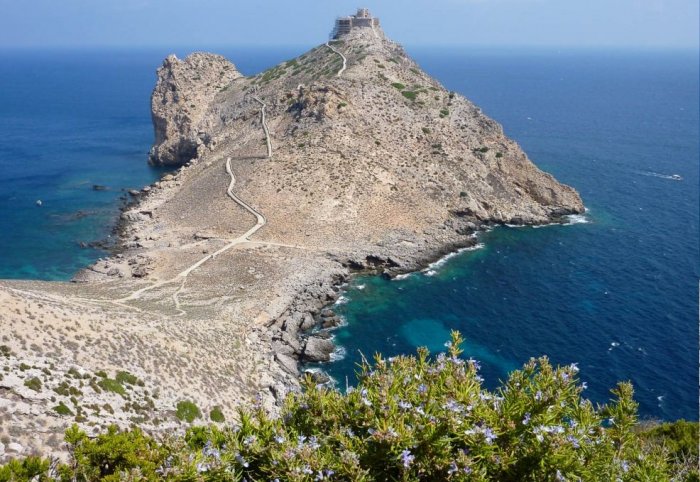 It is the most charming and beautiful of the three islands, and it is just over an hour by ferry from the city of Trapani, west of Sicily

The Galapagos Islands … a nature reserve in the Pacific Ocean

A haven of relaxation and rest in the Bahamas