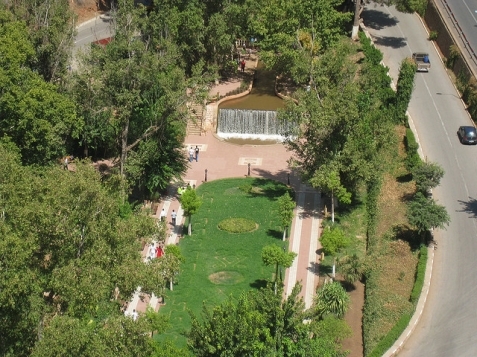 Beni Mellal is one of the Moroccan cities whose beauty and nature are enriched by poets and artists. City marked inherently glamorous and eyes water it, and on its shores. “Green Tunisia … O Beni Mellal,” just as singers of popular art sang it. Beni Mellal, are olive trees and flowing water through the city’s neighborhoods, clear and pure. Moreover, Beni Mellal is the region where the Amazigh and Arab contiguity contend with indifference to open debates in salons, cultural and political gatherings, radio and television programs, and newspaper pages, about cultural rights and the cold talk they have. Bani Mellal, with its Arabs and its Amazighs, is the region that the artist Mohamed Rouicha, the artist of the Atlas summed up with the phrase .. “Shallah and an Arab until my Lord pardons”, meaning “Amazigh and Arab, until God inherits the land and those on it.” 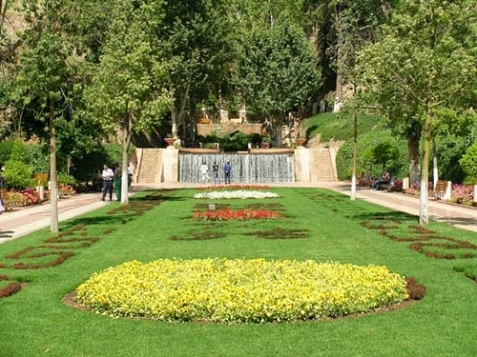 The “Ain Asardoun” palace, adjacent to Al-Ain, stands tall on the highland, like a guard, in greenery, Medina, and history.

Beni Mellal, is the city and the region, which is the bride of the Atlas, and the capital of the Tadla Azilal region, which is located in the center of Morocco, between the sides of Chaouia and Ouardigha from the northwest, and Souss Massa Draa from the south, Meknes Tafilat from the northeast, and Marrakesh Tansift Al Haouz from the southwest, meaning that it is It is located halfway between the cities of Fez and Marrakesh, and 200 km from Casablanca, while it opens to the south of Morocco, through the cities of Errachidia and Ouarzazate.
Beni Mellal has a history that summarizes the Tadla Plain, with its important geographical location, which has, over the centuries and years, been a struggle area to impose influence between the ruling families that successively ruled Morocco, before the colonial years and independence days came. 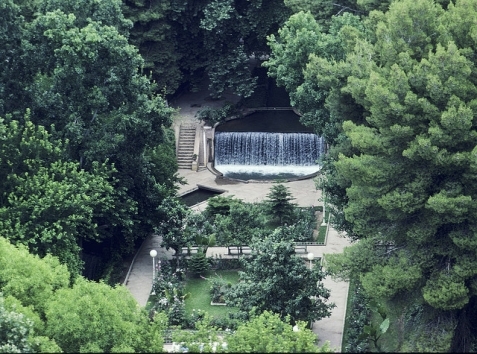 Beni Mellal, in particular, has the destination of Tadla-Azilal, in general, huge tourism potential, mainly associated with mountain tourism, and the luscious nature that forms across the Tadla Plain rich with its natural qualifications and peasant goods.
“Ain Asardoun” is composed of two words, the first is Arabic and the second is Berber. Asardoun means “mule” Berber, and thus the name becomes “mule’s eye.” How did the mule relate to this charming source and exquisite waterfalls ?! A historical story, which is not a legend, tells that a man from the Ait Sakhaman tribe returned from the market of the city of Beni Mellal on the back of his mule and passed the place where the water’s eye was located, and saw the hay coming out with the water from that eye, and estimated that the hay bags that were lost during their transportation from the threshing floor It rolled from the top to where the water descends from the mountain, and straw that comes from the water may be part of those bags. To confirm his assumption, he conducted an experiment himself, throwing hay in the same place where the first bags fell, and the next day he saw hay come out again from the same eye. The novel adds that the man closed the source on the mountain with wool, and went down in an attempt to blackmail tribes who lived in Beni Mellal in exchange for water, but they did not give in to blackmail after they knew the place through which the water was controlled, and the man was exposed to the oppression of those tribes, and the eye was called a mule that The Outlawed Man. “Ain Asardoun” waterfalls are located in the plain area where the city of Beni Mellal is expanding, where water flows downward in the form of waterfalls and forms a wonderful view, especially as the green surrounds the place, and with the flow of water from the waterfalls, the weather becomes refreshing in summer, and mild in winter. 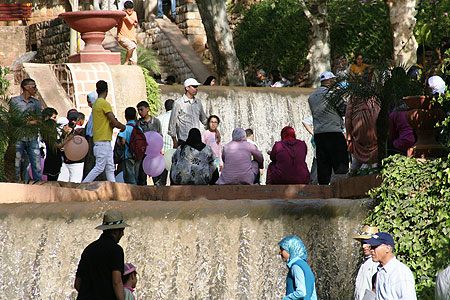 Perhaps one of the paradoxes of the region is that the water originates from the mountains inhabited mostly by Berbers (Berbers), and Arab or Arabized tribes benefit from it because they inhabit the agricultural plains suitable for agriculture. The beauty of “Ain Asardoun” dates in some of its aspects to the mixing of Arabs and Berbers, and this cultural mixture is the architecture of gardens that extend from the source of “Ain Asardoun” and surrounds it, and it forms copies of gardens in Granada and the rest of the cities that were prosperous in Andalusia. And still this charming source maintains the engineering design of these historic gardens, even if the colors of flowers change and visitors disagree. Visitors to the source of “Ain Asardoun” are not only residents of Beni Mellal, but they are from inside and outside Morocco, where European tourists visit Morocco only in order to see “Ain Asrdoun” waterfalls, and the view of the flow of water, and the wonderful gardens surrounding it. These people do not care about the story of “Ain Asardon,” but rather those who do not know anything about the city of Beni Mellal, as “Ain Asardon”, waterfalls and green parks became a guest and winter months of the city itself. 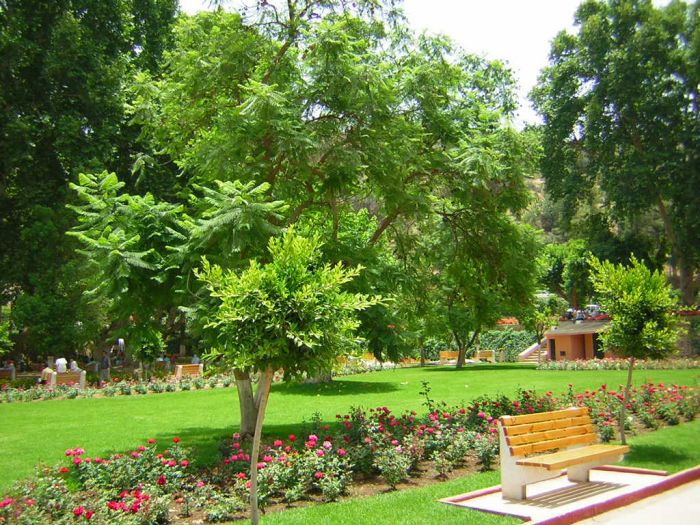 The tourism activity in the region was accompanied by the completion of an infrastructure to accommodate the increasing numbers of tourists, as there are in the city and the suburbs, hotel units in the level of receiving tourists who want to service their aspirations and give them important capabilities for visiting and tourism, including the hotels «the sun» and «Tazarkount» and «Ouzoud» and « Al-Basatin », then the region is known for its calmness and ability to provide security and safety for its visitors. 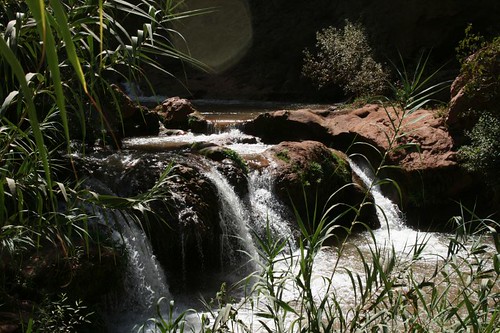 Azilal and Beni Mellal participate in the majestic Atlas Mountains, which stand out against the background of the city of Beni Mellal in a wonderful way, while the summit of “Tasmeet” is tempted to climb, while the tourist orbit of “Ain Asardon” is located on a small hill, where the waterfalls that furnish charming gardens, while The palace next to the eye stands tall on the high, like a guard, greenery, city and history. “Ain Asardoun” represents the pride of Beni Mellal and one of its major addresses, as its people and people cite it in advance and in a definition of the city and the region. “Ain Asardoun,” whose waters extend through the city’s details, such as the arteries that supply the body.
In “Ain Asardoun”, foreign tourists find them wandering in remarkable calm. The camera is in the hand, while the eye monitors luscious pleasure. Tourists, coming from the cities of fog and snow, celebrate the landscapes provided by the tourist orbit like young children. Smiling all the time, while the rhetoric of taking photos. In fact, they insist on depicting people, nature, and buildings, as if someone came upon a strange planet, and he wanted to capture the details of all the charm and beauty he sees in front of him. “Asredon was known throughout the years as a destination for families, during the summer, when they pitched their tents without a system that preserves the orbit of its aesthetic, and loves tourists and visitors in the place .. As for today, work is being done on investing them and marketing them according to tourist conditions, in accordance with the conditions of a strategic and well thought out process, through Make Beni Mellal a city of gardens and greenery, while polishing its image and presenting it as a tourist destination that can give a beautiful diversification to the Moroccan tourism product.
This addition, which will be provided by the destination of Beni Mellal to the Moroccan tourism product, will not be the tourist orbit of “Ain Asardon” except for one of its beautiful and gorgeous addresses.

The most important recreational tourist places in the Kingdom of Bahrain