Learn about the most important customs and traditions of the Somali people. 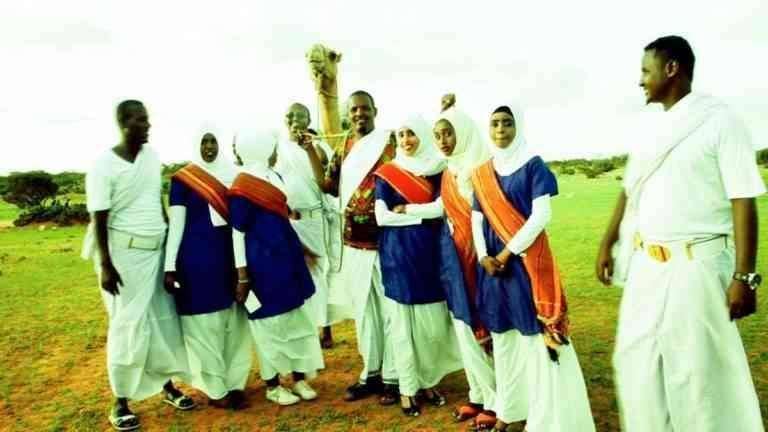 Learn about .. the most important customs and traditions of the Somali people..you are in Somalia you are on a date with witnessing all that is strange and strange, as Somalia is famous for some strange customs and traditions somewhat, and comes on top: the man’s marriage to his brother’s wife upon his death, and the coercion of the advanced girl At the age of leaving her tribe and traveling far to seek marriage, and the forms and types of marriage are varied and varied in Somalia, and we are exposed to them in detail below. Read also: Tourism in Somalia .. Tourist guide

_ The most famous customs and traditions of Somalis in marriage .. 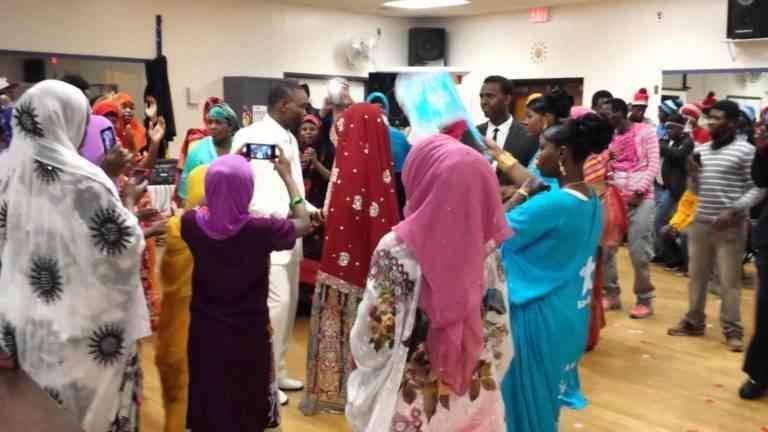 _ The most famous customs and traditions of Somalis in marriage..Marriage in Somalia is of great importance and its various types, including the stranger and the curious, so you find, for example, that they hold ceremonies dominated by simplicity, where the wedding ceremony takes place under the “trees” so the interview between the groom and his bride is under the tree and they get to know each other Some of the bride’s family take on the task of preparing and decorating the tree to be ready to receive the bride and hold the sermon under the tree. Banquets are held and food is provided to the groom’s people under the trees. The Somali people are keen to start the engagement ceremony with some verses of the Noble Qur’an, the families of the newlyweds gather and eat under the trees and gravitate to the parties of the conversation here and there and are interested in telling the successful stories about marriage, and they are keen to eat tea and hear a word or sermon from the Sheikh of the tribe and its president to bless the engagement and marriage. Completion of the engagement The groom’s family presents the bride with some symbolic gifts, and the engagement ceremony takes place in the presence of the family and relatives, but the bride must remain in her home and be represented by the father or one of the relatives and are keen to celebrate the marriage for a long time so the gatherings continue for several days in which they eat A year and tea and tell stories and stories. One of the most important customs and traditions of the Somalis is to offer milk in a large container called “al-Qalqulwa” and served to the groom’s people and next to it you find meat utensils next to delicious dates, and the bride’s family is keen to invite young people from the bride’s family to attend these sacred ceremonies for them, and at the end of the day Everyone goes to the bride’s family home and offers them honey-filled utensils alongside meat. Read also: Customs and traditions of the Pakistani people

Haren “Heerin”… the most famous and strange form of marriage for Somalis .. 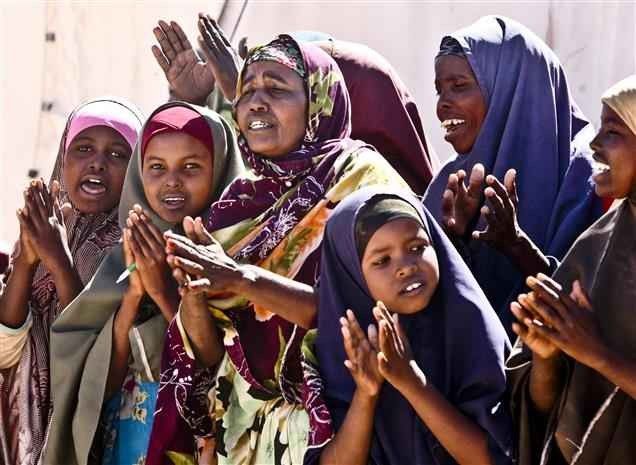 – Haren “Heerin”… the most famous form of marriage among Somalis..and it is considered an important type of forms and forms of marriage in Somalia and concerns the girl who is old and did not marry, and is forced to leave her home and travel to another place to seek marriage, which is one of the strangest customs and traditions of the Somali people After traveling to another place, the girl breaks into a house and tells them her story and that she is fleeing to seek marriage, and the owners of the house and the people of the region must assume the task of marrying this girl and the groom is often one of their children. In the event that the parents refuse to marry their son to this girl, they will be punished, which is to pay a fine. Estimated to be “50” camels, and in case Refrain from paying the tax they are subjected to violence by the girl’s family, and she is one of the strangest customs and traditions of the Somali people. One of the customs and traditions of the Somali people is “forced marriage”. When the young man accepts the girl’s sermon and meets him with refusal, he kidnaps her and forces her to accept the marriage and indeed the marriage takes place, as the girl who is forced Her husband died to marry his “brother” in order to protect the children and this type of marriage is called “dumal.” Among the strangest customs and traditions of the Somali people, the parents agree on the sermon of the children before birth, and this strange habit is spread among friends and when the children grow up they are not entitled to object P Generate this sermon that preceded their birth. Also read: Tourism in Kenya .. For lovers of safari trips .. 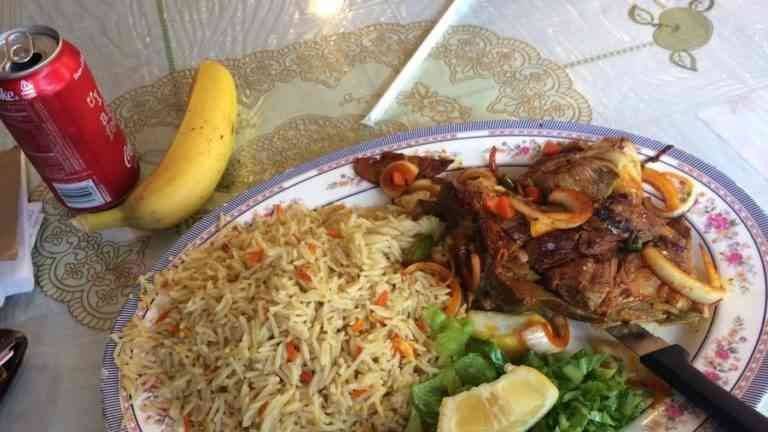 – Somali eating habits..One of the main causes of starvation in Somalia is their refusal to eat fish despite the country’s richness in great fish wealth, but they refuse to eat fish next to “chicken and birds”, and it is one of the most popular foods that Somalis prefer and consider it an essential meal at their table. Samosa “and are keen on eating it especially in the month of Ramadan. One of the famous dishes in Somalia is” rice with pasta “in one container, there they are keen on mixing foods with each other, and in many cases they serve bananas accompanied by rice, and they depend on ghee and white flour in all their foods and are Serve meat with gravy and They avoid eating chicken, as the basic meal of the Somali people is meat, especially goat meat. The table is supplied with vegetables and more spices that the Somali people love. One of the most famous customs and traditions of the Somali people is to perfume the house after eating every meal, so incense is used in abundance in homes. It occupies “halva” It is of great importance to the Somali people, who consider it a basic dessert on their tables, and for breakfast they are keen to provide obese living with obesity and sugar and present it as a delicacy for children, and it is strange in the Somali people that they denounce the presence of craftsmen among them and consider it a “low” profession as well as You see a “camel ride” as a major shame, and it is one of the strangest customs and traditions of the Somali people. There are many conflicts and conflicts between the Somali people and each other and the victims of the victim do not resort to revenge for their son from the offender, but they accept the “blood money” and all the people of the perpetrator participate in it, there is a great family bond that is distinguished The Somali people are keen on preserving the water resources from perishing, there you find rationalization of consumption and the imposition of penalties on those who waste water where fines are imposed, and among the most important customs and traditions of the Somali people is that young people participate with each other in cultivating land and digging more “wells” Most important The tools and traditions of the Somali people, holding wedding parties after the rains in the spring, where the mild weather is ready to hold ceremonies and their marriage ceremonies, and they have more water and livestock to prepare delicious meat dishes. Women in Somalia are keen to preserve customs and traditions and their relationships with young people in The purpose of firmness and seriousness and upon marriage gifts are presented to the family of the bride and are often “cattle” and some money that the family considers dowry for their daughter, and it is worth noting that the requirements of marriage for the Somali people are simple and not expensive at all, for the value of the dowry, for example, does not exceed some “Yards” is equivalent to “15 pounds”, and marriage takes place in the presence of the tribal sheikh who opens the marriage by reading some verses of the Qur’an. After the marriage contract, the bride’s parents are keen to gather in one place and chant their songs, and walk the bride in a large procession for her husband’s house, and in ages Previously, the bridegroom was obliged to “hit” his wife on the wedding night so that the extent of his “strength” could be proven to her and the celebrations would continue for a period of no less than seven days. Marriage customs in Somalia differ from one region to another, for example in the south the young man is obliged to marry his cousin, and give her family more cattle Camels loaded with food and banquets, and on the wedding night, they gather Friends around the bridegroom and drive it to the marital home and perform the circumambulation around it three times, as the bride comes with her friends and they exchange songs and dances and floating around her around the house while she wears the clothes that the bridegroom brought as a gift for marriage and they are not allowed to leave the house before the passage of six days. Somalis adhere to the teachings of the Islamic religion to be satisfied with marriage Of the four women, polygamy is a common thing there, and the wife’s mission is to take care of livestock, raise children, and make more mats, as crafts are greatly developed in Somalia. Source 1 here. Source 2 here