The most beautiful 5 tourist places in Bosnia

Bosnia and Herzegovina deserves the title of Heart of Europe with distinction, as its map appears in the form of a heart, giving it a welcome precedent for the welcome and pleasure it will receive when visiting it. In Bosnia, there are great sights, an impressive history, a varied culture, and much more to discover there. Plan your visit to this distinguished country by presenting with you today the most beautiful 5 tourist destinations in Bosnia.

One of the most famous cities in Bosnia and Herzegovina is Mostar, you undoubtedly saw many pictures, particularly the famous “Star Most” bridge, which is listed on the UNESCO list of heritage sites, along with pictures of its picturesque nature. Mostar has a lot of evidence of Ottoman architecture, with lots of restaurants, markets, mosques and other historical buildings.

The “Star Most”, or the old bridge of the Ottomans, was built in the 16th century and is a living proof of Islamic engineering in Bosnia and converges with the beautiful “Nerefta” river in the heart of the old Mostar. During the war in the Balkans, Al-Jusen was destroyed, but it has been rebuilt and has now been restored as a heritage site.

You should take a lot of pictures there and discover the magic of the place on your own! He then went to the Muhammad Pasha Kosks Mosque near the river, which is considered one of the most important tourist places, and it is distinguished as the only mosque that has preserved its colors, dome and colorful windows since its construction. And do not forget to do the shopping in the old market of Mostar, which is located between the two banks of the river, it is also designed in the Ottoman style and you will find distinctive souvenirs, national carpets, colorful lamps, etc., then enjoy a wonderful landscape while eating in one of the cafes spread in the region.

Mostar has had difficult times in the past, so as you enjoy the tourism there you will find a lot of evidence and places to tell what happened in this city, where many people lost their loved ones during the war, but it remains one of the wonderful places in Bosnia.

The capital, Sarajevo, is known as one of the most culturally and culturally diverse cities in which everyone lives in harmony and harmony. Tourists have a lot of distinctive sites, especially the Ghazi Hosrif mosque, which is the largest in the country with a number of ornate domes and in front of it is a beautiful square. The mosque was completely rebuilt at the end of the war.

We all mention in history lessons how the First World War started with the assassination of the Crown Prince of Nesma in Sarajevo. This catastrophic event took place near the “Latin Bridge”, which is one of the oldest Ottoman bridges in Sarajevo, and at the end of the bridge a sign indicating this event should be seen because of its historical importance. Also, he went to “Kovaci”, a memorial site for war victims, also called “Martyrs’ Cemetery”, and near it is “Yellow Castle”, which is an amazing location to watch the sunset.

During your visit to the capital, you can not taste Cevapi, which is the national dish in Bosnia and consists of minced meat with pita bread, onions and special sauce and you can find it in many restaurants and cafes from Sarajevo. One of the most famous cafes of Sarajevo is “Teto”, in reference to the ruler of the former Yugoslavia, and the cafe has gained international fame due to its decoration and information about it that you find in the cafe.

The beautiful town of Trebinje is located in the far south of Bosnia, just 30 km from the beautiful Croatian city of Dubrovnik. Discover during her visit the historic town center, stone bridge, ancient Orthodox churches and many more.

During her visit, you can do many outdoor activities surrounded by 7 mountain peaks, each of which you can practice hiking. Many tourists practice parachuting from the highest peak in the area on Mount Leutard, as well as rowing on the Trebišnjica River. Strac Castle is one of the most famous sites in the city that are worth a visit.

For ski lovers, we have chosen the Yahorina Resort as one of the 5 most beautiful tourist destinations in Bosnia. The ski resort in Jahorina is one of the most famous in Bosnia and offers a range of indoor and outdoor activities and is an ideal location for alpine skiing, surfing, hiking and more with more than 40 km of sports sites.

In summer, the mountain is covered with green lawns and pine forests, where tourists come to enjoy the pleasant atmosphere.

Hotels and apartments are spread in Jahorina, where tourists can spend more than a day there. There are also many restaurants, cafes and tourist facilities.

If you are looking for tranquility, breathtaking nature and pure beauty, head to this wonderful region that is famous for the “Pliva” river, along with the waterfalls “Martin Board” and “Strpachki Pod” which are considered the most beautiful.

As for the Yaesta Castle, a snake built to the thirteenth century during the royal era of Bosnia, overlooking the city from an altitude of 470 meters, and it has many gates and towers that provide a wonderful panoramic view.

You should also visit windmills in the medieval region, which formed a barrier between the largest and minor lakes of Pliva in a distinctive aesthetic scene. 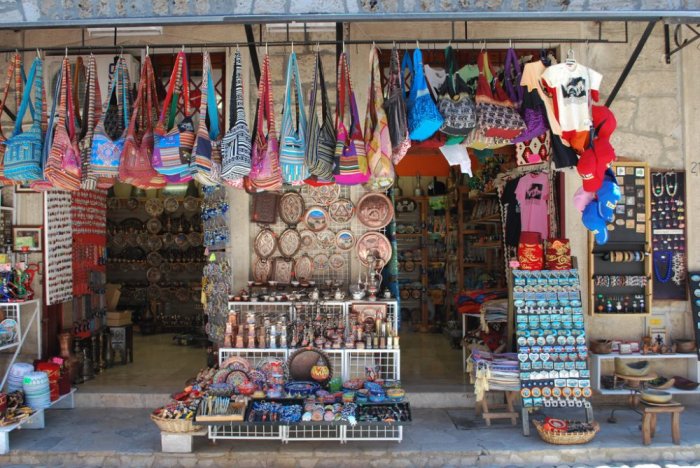 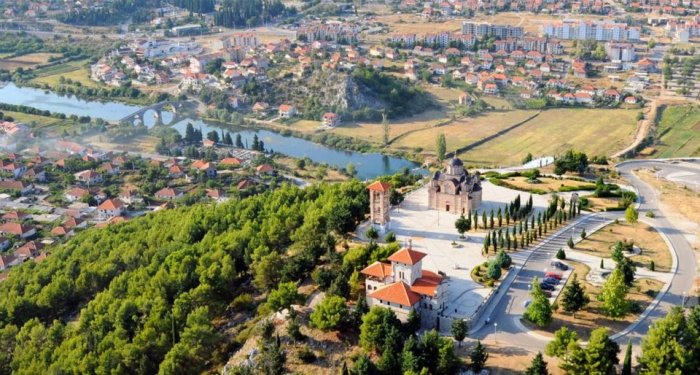 From the beautiful city of Trebingi 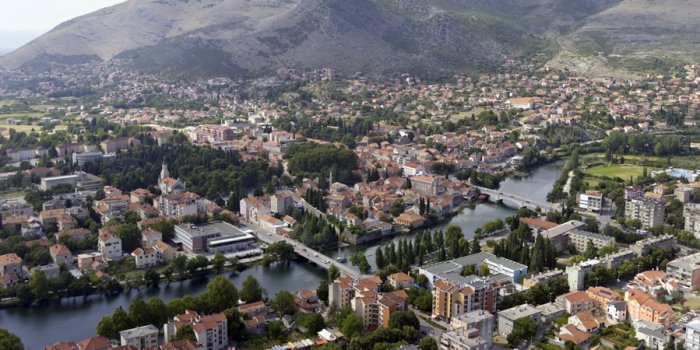 A scene from the city of Trebingi 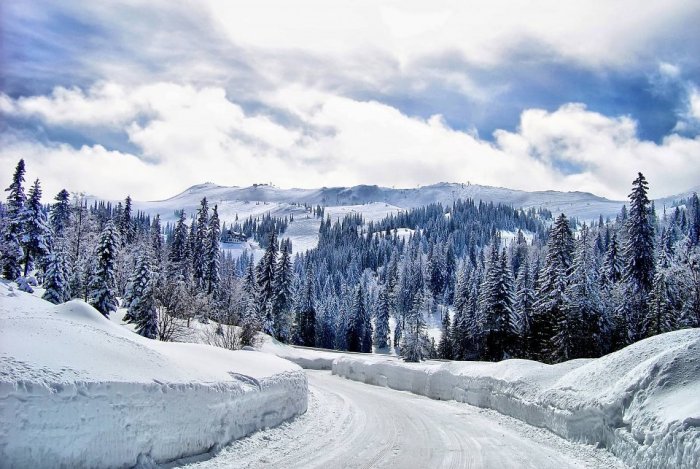 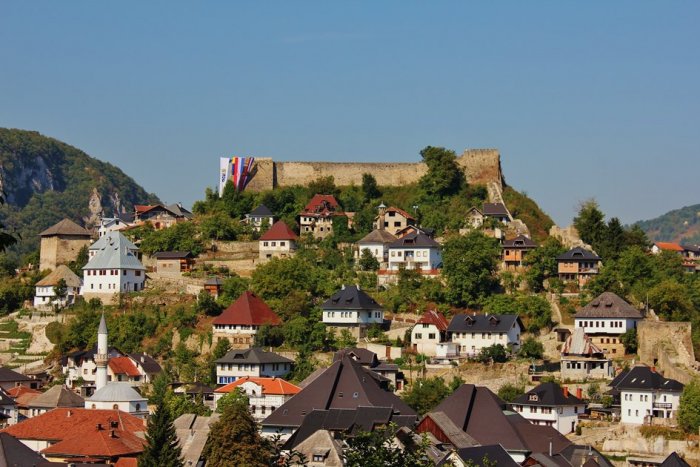 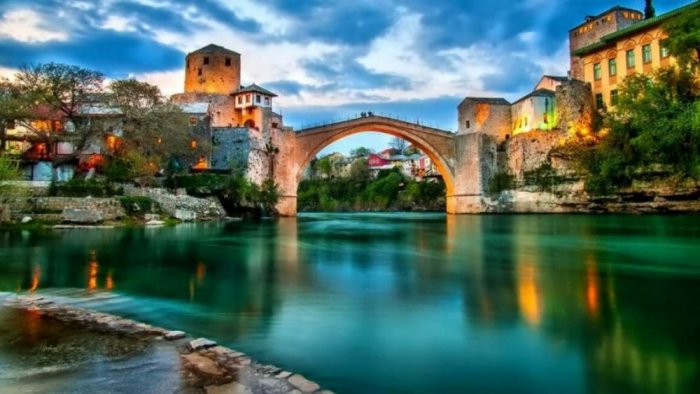 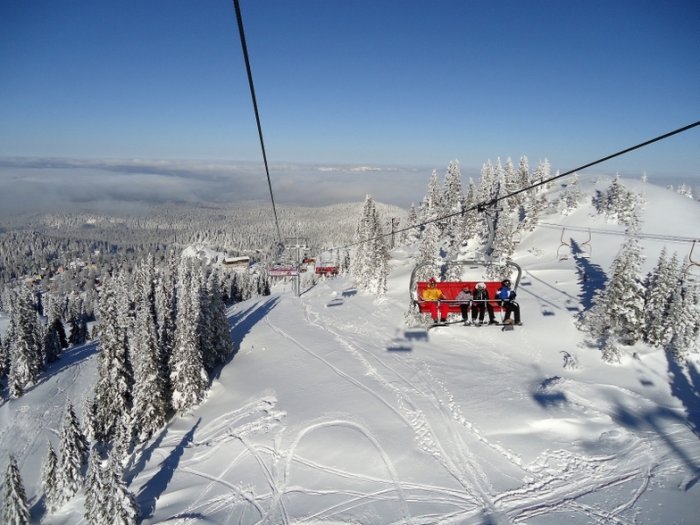 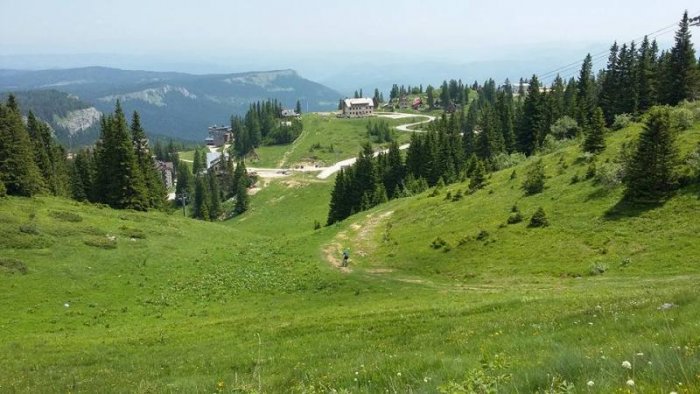 Yahorina Resort during the summer 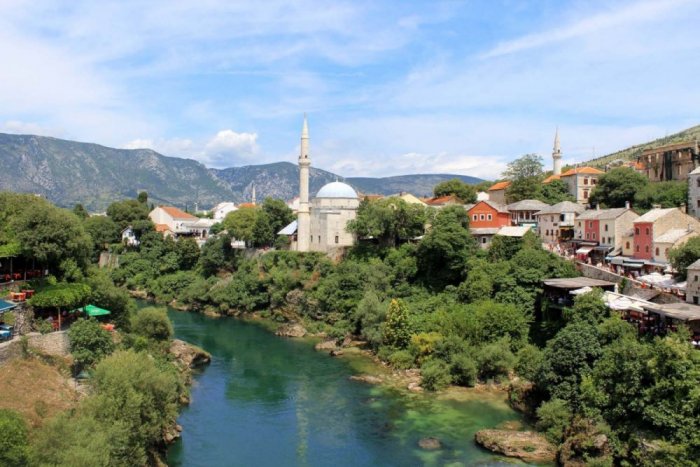 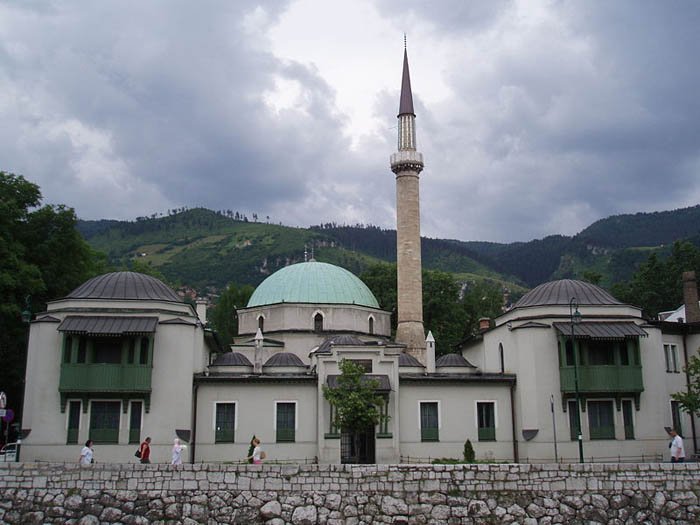 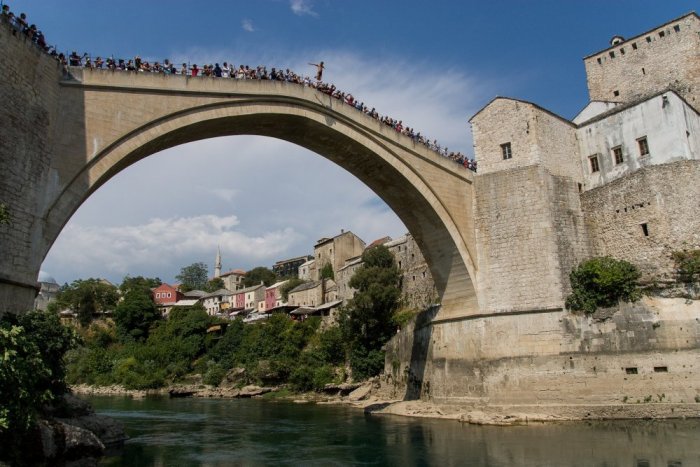 Jumping from Mostar Bridge is a hobby for many. 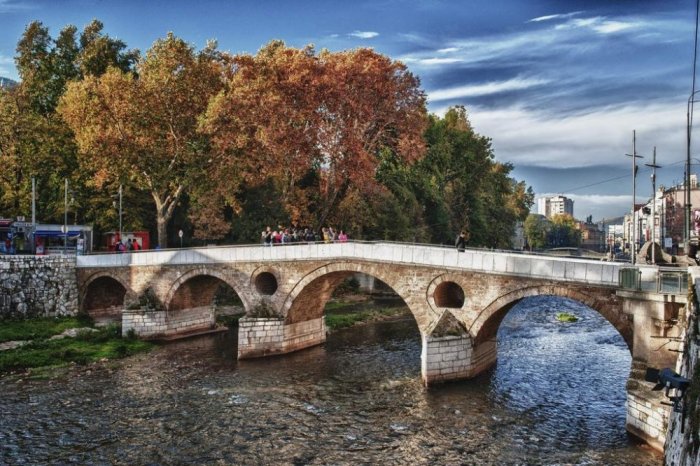 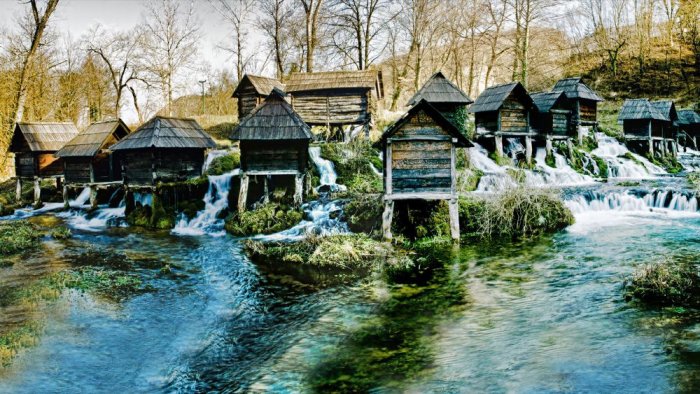 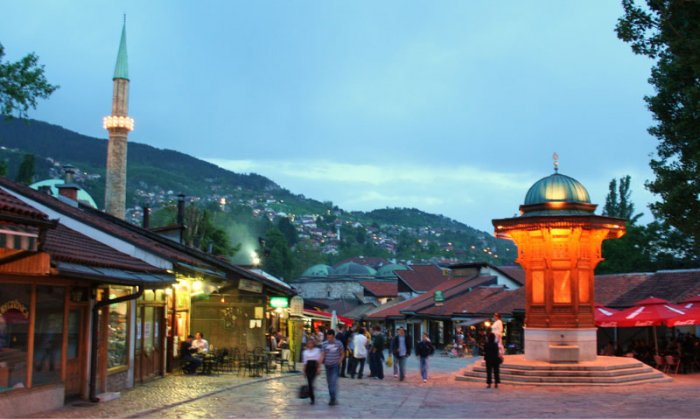 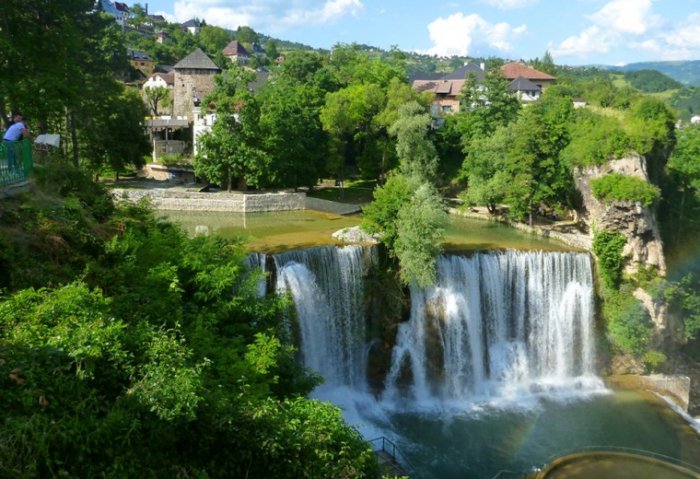 The most beautiful city of Mostar 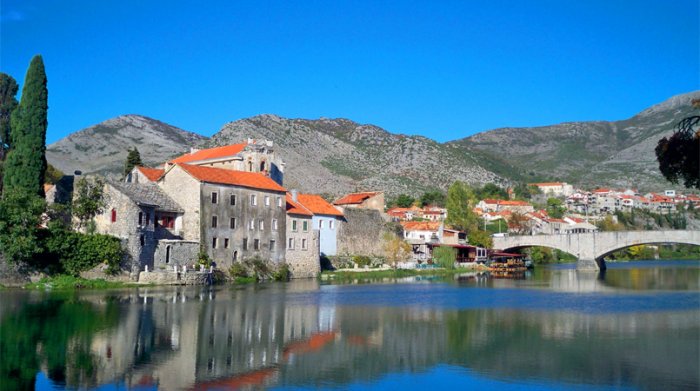 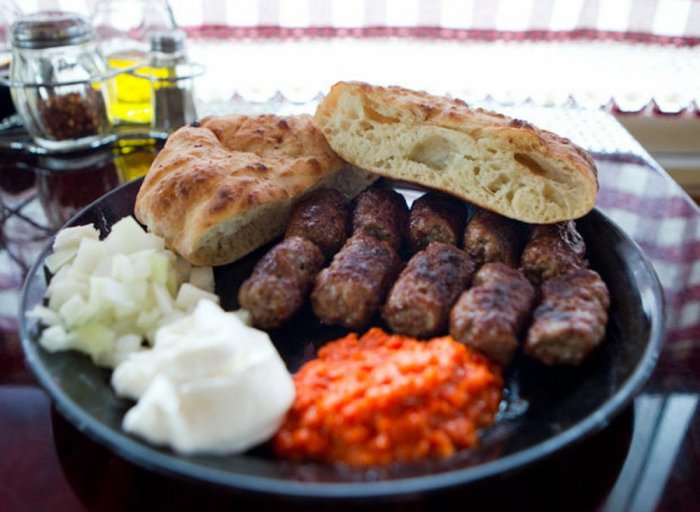 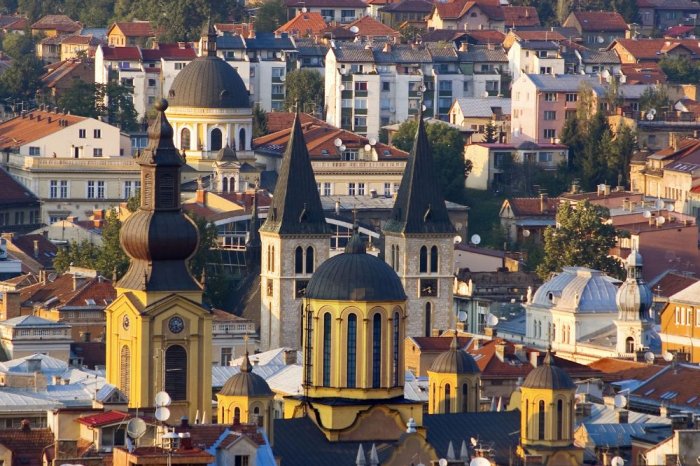 Tourism in Indonesia and the most important shopping places in it