We know together a group of islands that share a very distinctive characteristic that makes them stand out among other islands around the world, and they appear from the top in different forms, there are hundreds of islands in the world that take different forms, but the islands that we will talk about today are similar to their forms Animal shapes and sometimes foods and some objects or symbols that we see in our daily life, from the heart-shaped or dolphin islands to those that are like pizza, and there are many islands such as Taiwan’s Guishan Island, Mavuva Island Fiji, Molokini Island of Hawaii, Dilumacad Island of the Philippines, Tavarua Fiji :

Spratly Islands is an archipelago of a group of small atolls in the south of the China Sea, and there are more than 750 islands, and it happens that this group of islands combine to form a wooden boomerang.

The Spratly Islands group, which extends over an area of ​​4 square kilometers, is uninhabited, but it offers a fishing area rich in fish and a rich mining area and is believed to contain huge reserves of natural gas, and this is the most prominent cause of territorial disputes and claims on these islands between the six countries that fall these The islands between them, the vast majority of these islands are closed to visitors, including those who have been converted to military bases, and the best way to view them is to fly over them by plane to see the archipelago form from above, but note that the archipelago shape does not always appear in the form of wooden boomerang as its shape changes depending on the Marking and movement of the flow of water currents.

One of two famous heart-shaped islands, and this island is about 150 miles from the south of the Australian coast and is one of the most romantic areas in the world thanks to its white sandy beaches and beautiful lakes, and this island contains many tourist attractions, including beautiful fishing villages and high mountainous highlands And beautiful coasts, this island lives on less than half a million local residents, and therefore it is not very crowded like other tourist areas and it deserves to try to explore and see it from on the island and from above to see the shape of the heart that seems appropriate for the island.

This small island looks exactly like a piece of pizza if you watch it from above, and this shape may be the result of the crater of a submerged volcanic mountain and a completely round lake located in the center of the island and linked to the sea by a narrow channel, this island is located on the coast of another island that is bigger than it is an island. São Miguel ”, and the fact that the island of“ Vila Franca do Campo ”is part of“ São Miguel ”and one of its most popular tourist attractions, especially that the Red Bull Cliff Diving World Championship was held there.

The waters that surround the island “Vila Franca do Campo” are famous for their beauty and serenity, which makes them an ideal place for swimming, diving and snorkeling. The island contains one small but beautiful beach and is ideal for relaxers on the beach and those who want to get sunbathers, the island was in the past open In front of visitors throughout the year, but it is now open to visitors during the high season only between June and September, during this period a special service is available to transport tourists to the island using boats.

The country of the Philippines is famous for the presence of a good number of crocodiles within its borders, so it is not surprising that we find a Filipino island in the form of a crocodile and that the actual name of this island is “Crocodile Island”, this island is located near a famous beach tourist destination which is the Philippine island of Boracay, Crocodile Island can be reached from Boracay Island by boat in a journey that does not take more than 20 minutes. One of the most famous activities that you can do while you are on Crocodile Island is diving and sailing because of the diversity of marine life on the island of Crocodile, except that the water currents are in Very often strong to a large extent Therefore it is recommended that only professional divers or those with experience experience diving in this area. Expect your visit to this island and your practice of diving there. You can see swarms of colorful fish, murray fish, marine snakes and coral reefs. Visitors to Al Temsah Island usually do not go to the island’s land but rather They only go to the surrounding area by boat to practice diving, it is worth noting that the coral reefs in that region have been damaged during the past years and are not as beautiful as they were in the past.

This island is known as the island “Li Galli” or “Sirenuse” island and it is a beautiful island in the form of a dolphin located on the famous Amalfi Coast in southern Italy, specifically between the island “Capri” and the village “Positano”, the island got its name “Sirenuse” in relation to the legendary object Siren, who was known in Greek mythology as a dangerous creature who takes the form of a beautiful woman to seduce sailors to their deaths, and it is believed that the creatures “Siren” have visited an island several times and tried to seduce the legendary hero “Ulysses”, this island It is a private island that had many owners in the past, the last of which was Giovanni Rus so) He is from the city of Sorrento and owns a chain of hotels, and Rousseau spent the past fifteen years working on a project to renew the island and spent millions of dollars on that project. Rousseau transformed this island into a private residence that has a luxury house dedicated to his residence and in addition to that he has By building a group of beautiful tourist villas available for rent, and he appointed a group of employees and set aside a speedboat for the staff to accompany the island’s guests to it, it is worth noting that it is not allowed for those who are not authorized to be on the island but it is welcome for all who wish to swim in the water area surrounding the island. 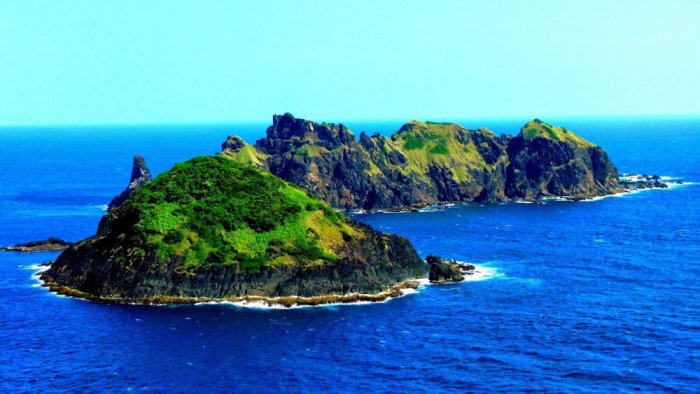 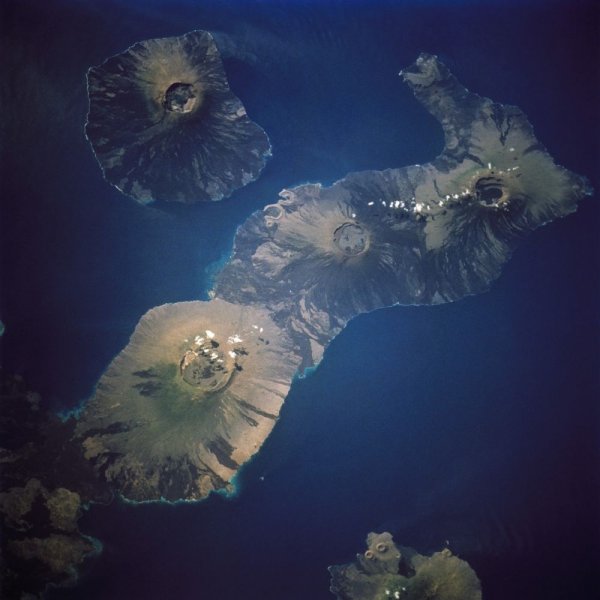 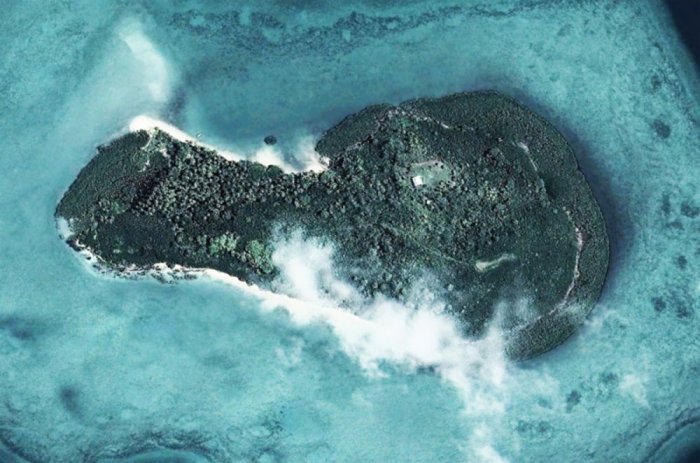 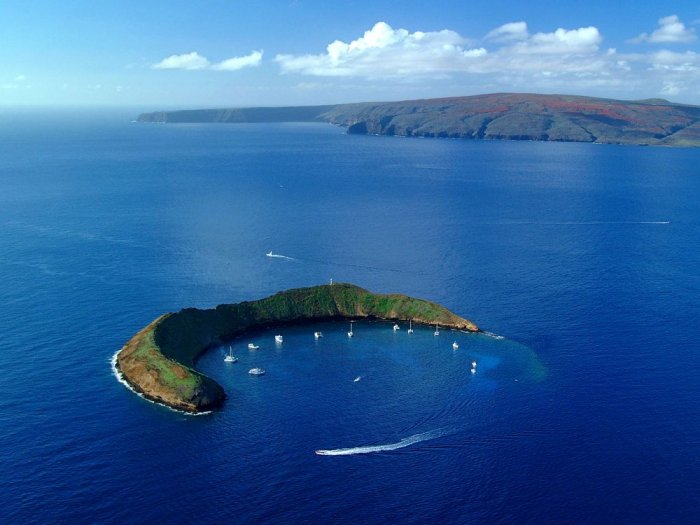 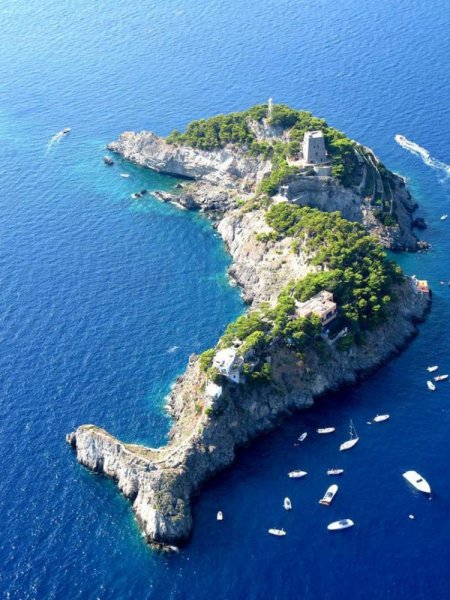 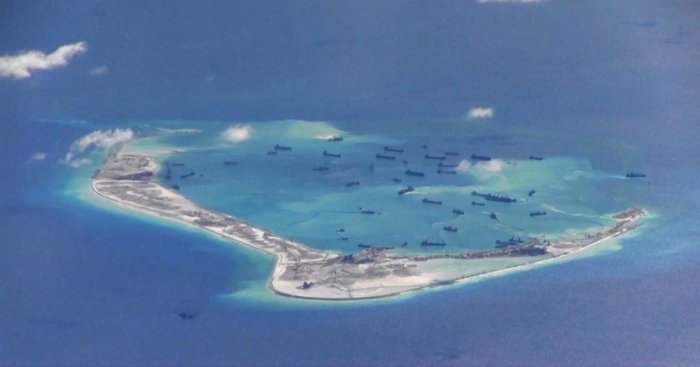 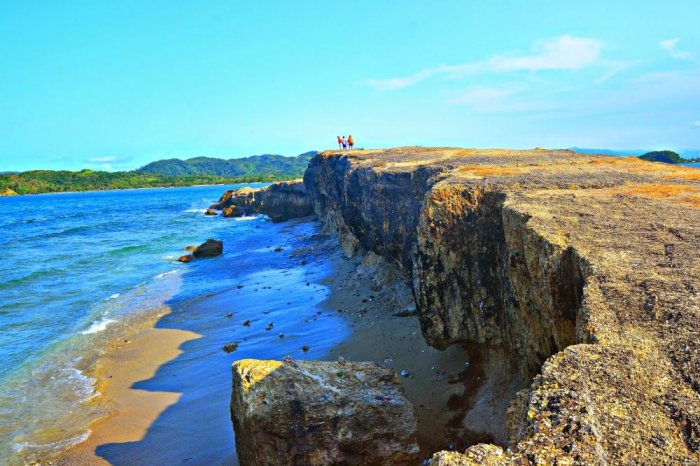 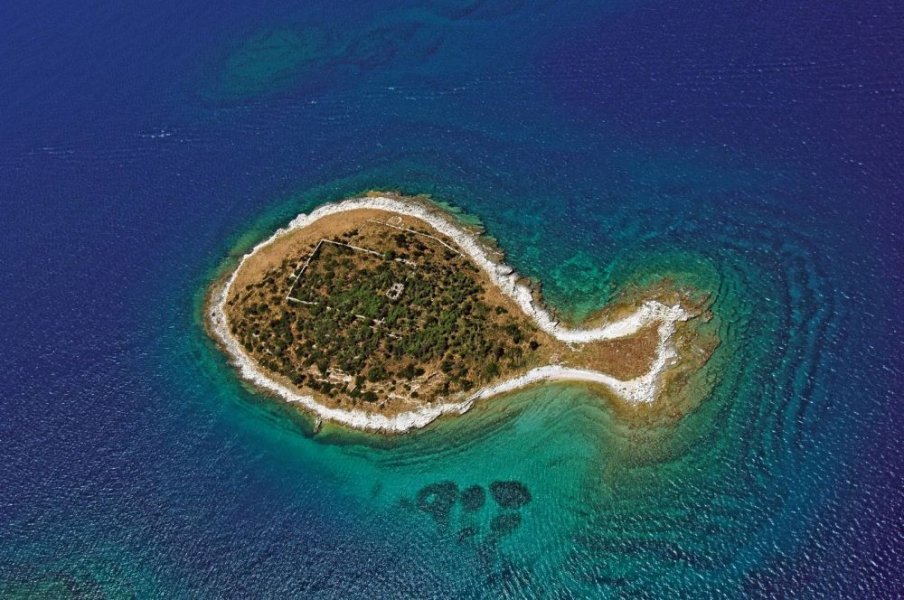 Island in the form of fish 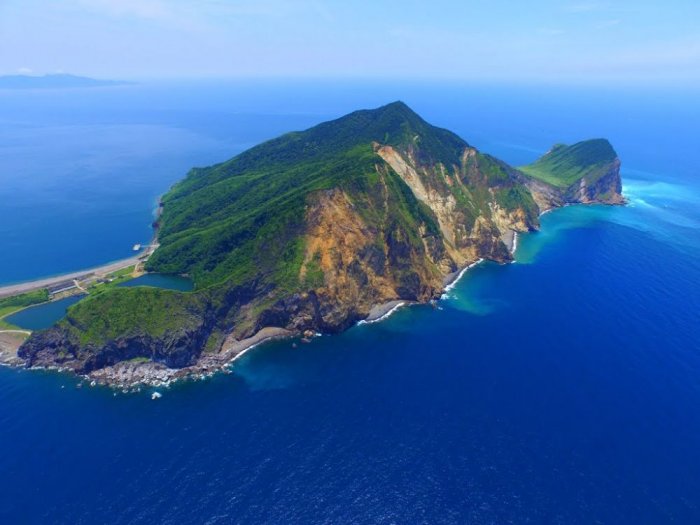 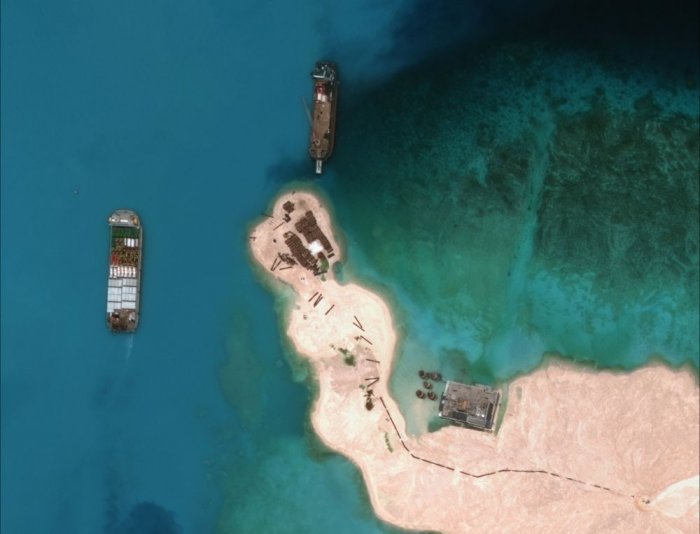 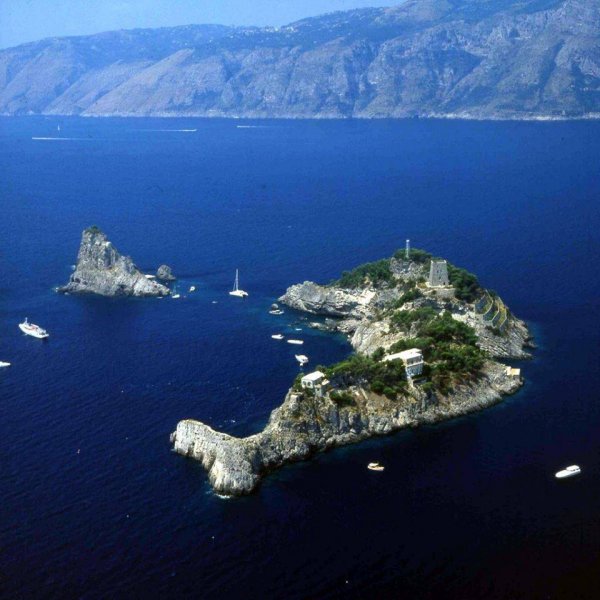 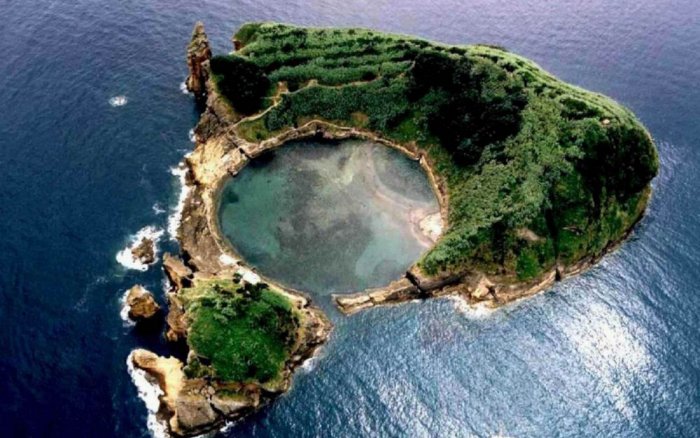 This little island looks exactly like a piece of pizza if you see it from above, and this shape could be the result of the crater of a submerged volcanic mountain and a completely round lake 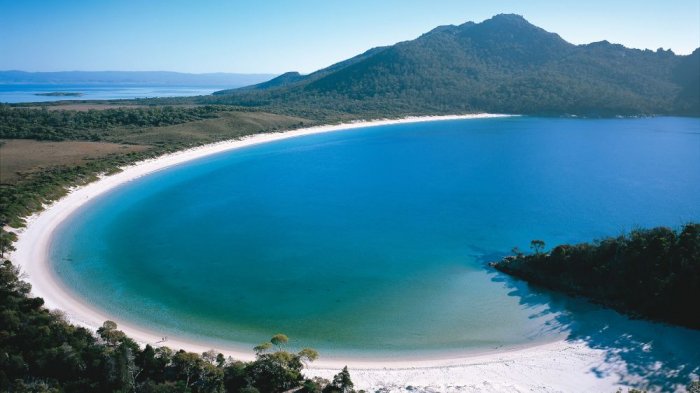 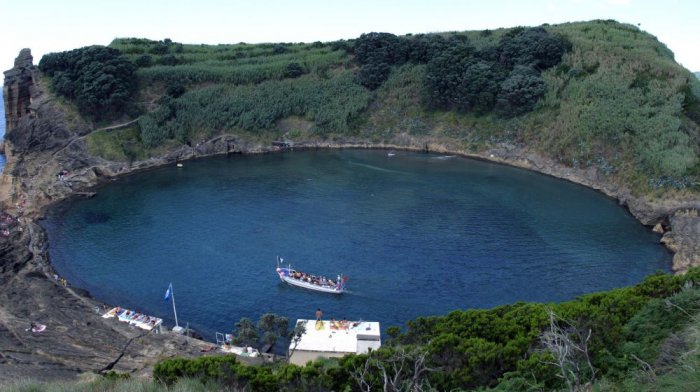 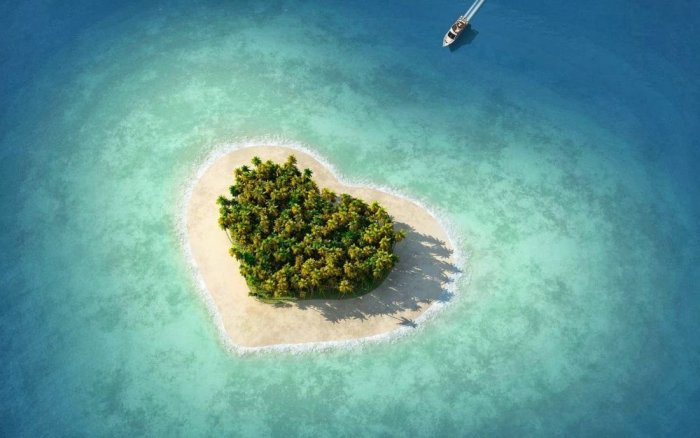 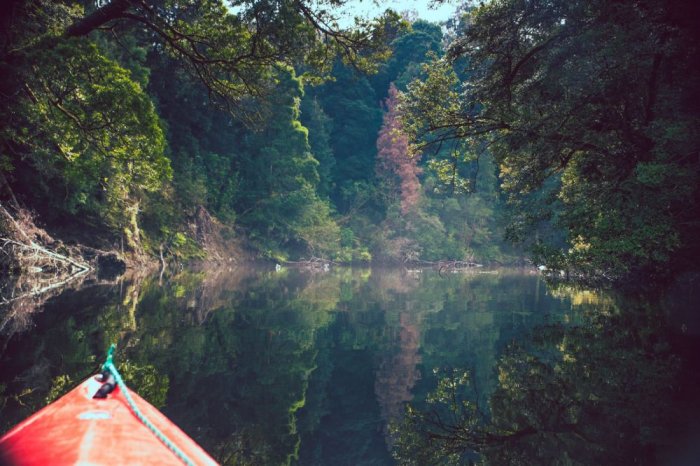