The pleasure of traveling to the Mediterranean bride 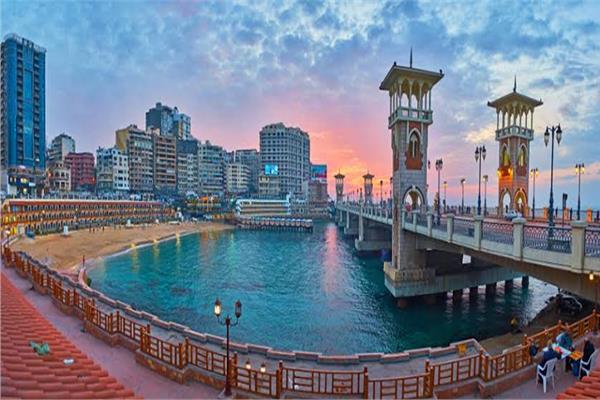 Alexandria is located in the north of the Arab Republic of Egypt, and Alexandria enjoys its importance due to its unique location, it borders Lake Mariotia from the south, and the city has since been built and is in continuous development, as the city has a lot of prosperity in terms of economic and cultural status compared to The rest of the Egyptian cities, and Alexandria is located in the most important and largest ports in Egypt.

The city of Alexandria was also distinguished by the splendor of its architecture, and it was once a small population, which allowed it to receive large numbers of immigrants and displaced people to the city who came from the surrounding rural areas.
Also, the city of Alexandria is considered one of the most important economic centers in Egypt, as Alexandria occupies the second position in terms of import and export of many diverse goods through the port, as it is one of the important tourist cities that contain a large number of archaeological sites, and wonderful beaches that Visitors come to it from everywhere, and agriculture in Alexandria occupied about 70,000 acres of city land to provide for the need of the existing population increase.

About the life of Alexander the Great

Alexander the Great was the founder of the city of Alexandria, which was named after him. Alexander the Great was born in the year 306 BC, and he is considered the second son of the Leader of Philipus, and his mother is Olympias, and his father had controlled all of Greece in 338 BC, after which Alexander the Great came And he took control of the throne of Greece after the death of his father, and that was in 336 BC, Alexander the Great studied a lot of different sciences that were at the hands of the Greek philosopher Aristotle, and he came out from under his hands as the most successful political leader, and he made a large number of invasions, and he The most famous was the battle that was between the emperor The Persian phase, which included Egypt and the Phoenician coast, and Egypt was a state belonging to the Persian Empire, and Alexander the Great entered it in 333 BC, and established on the coast of the Red Sea coast and beside Lake Mariotia a wonderful coastal city called Alexandria, and Alexander completed His greatest conquests and battles until he died of fever in 323 BC inside the city of Babylon.

What are the characteristics of the city of Alexandria

1_ Alexandria is one of the most important industrial and economic cities in Egypt.
2_ The climate in Alexandria is wonderful because of that wind that comes from the Mediterranean Sea, and the climate in the summer is relatively hot and in the winter is very cold which leads to some storms and heavy rains.
3_ The population is constantly increasing in the city of Alexandria, and we note that the vulnerability is increasing in each period, as births and migrants from the countryside are increasing, as the population in the twenty-first century reached about four million people.
4- The economy of Alexandria is also a very important national economic supporter of a source, as the economy in Alexandria is estimated to be one fifth of industrial production in Egypt in general, and there are also very important areas in the economic field, for example the Mina al-Basal region, which is one of the areas that are very rich in warehouses. In the past it was known as the area of ​​cotton merchants, as the city of Alexandria is very famous for the salt industry, and also for the tanning and cement business, but the most important industry in Alexandria is cotton, as cotton is one of the most important economic fields in general.