Graz .. the city of magic and beauty

The city of Graz is one of the most famous cities of Austria, and even the most beautiful and attractive city for tourists from all over the world. Therefore, the Austrians consider it the second capital of the country after Vienna, although its area does not exceed 127 thousand square kilometers. And beauty, because it contains dozens of beautiful scenery among its flanks and many ancient buildings and museums very ancient and what was left of successive wars and ancient civilizations, and the museums are the most famous factors in Graz of tourist attractions.

The most important places of tourism in Graz 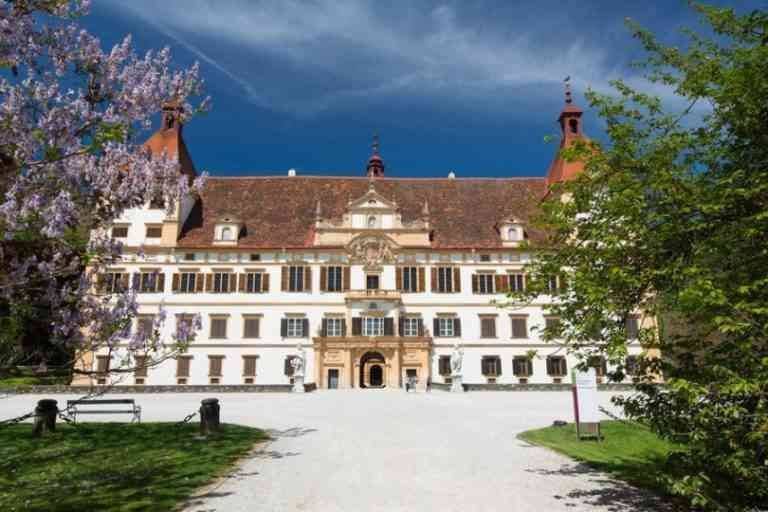 Aigenberg Palace is considered one of the largest palaces in the city of Graz, and one of the most prominent tourist destinations in Austria; it is accepted periodically by a good number of tourists every year from all over the world to enjoy the beauty of its designs, as well as its beautiful gardens and what it contains of the types of flowers and beautiful aromatic plants, It is a palace that contains a large number of rooms, reaching about 31 spacious rooms. It also contains a large number of doors, corridors, roads, beautiful angles and more than 50 gates of the palace. It is a very old architectural palace that contains large quantities of furniture, antiques, rare and precious antiques that D for hundreds of years, and the palace is considered one of the largest artistic destinations in Graz, due to the very elegant mural art that dates back to ancient times, and yet it still preserves its beauty. Read also: The cost of tourism in Austria ..

Schlossberg Hill .. when nature is beautiful 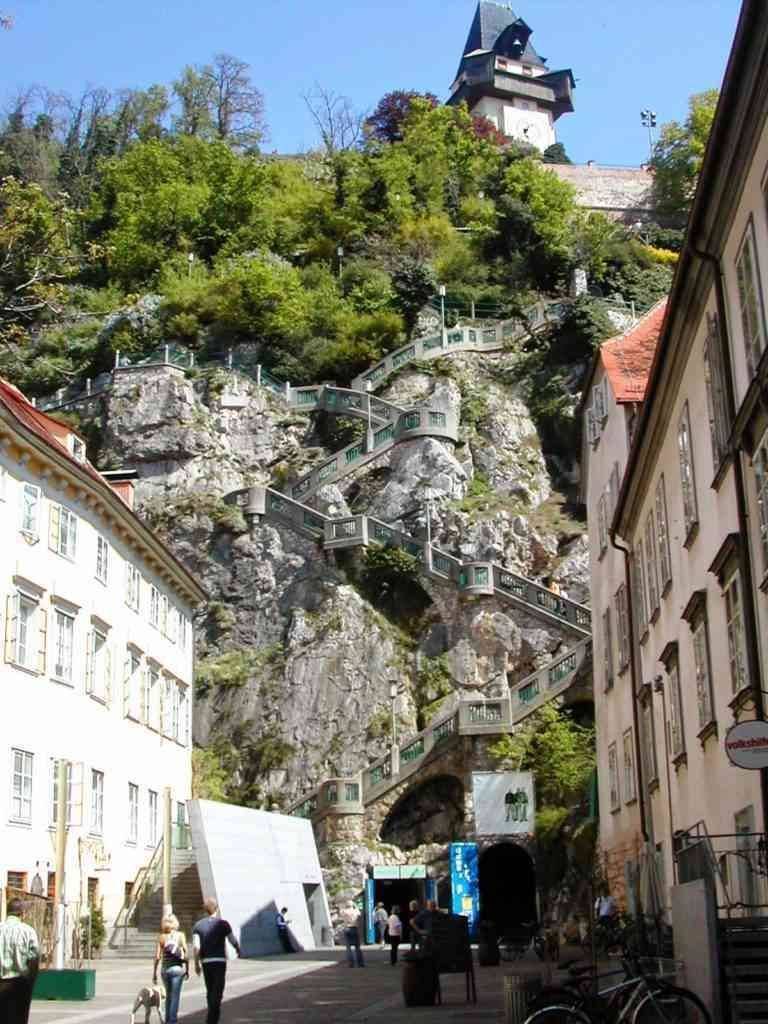 This hill is a simple high covered with trees and plants on each side, and is located in the center of Graz, where most visitors to the city pass, and tourists from all over the world are keen to see and take a walk in and around it, as it is very beautiful and there are many amusing places such as restaurants and cafes, It is also characterized by the presence of a number of steep stairs, which gives a more beautiful shape, but it requires a lot of caution and caution when going up and down from and to it. 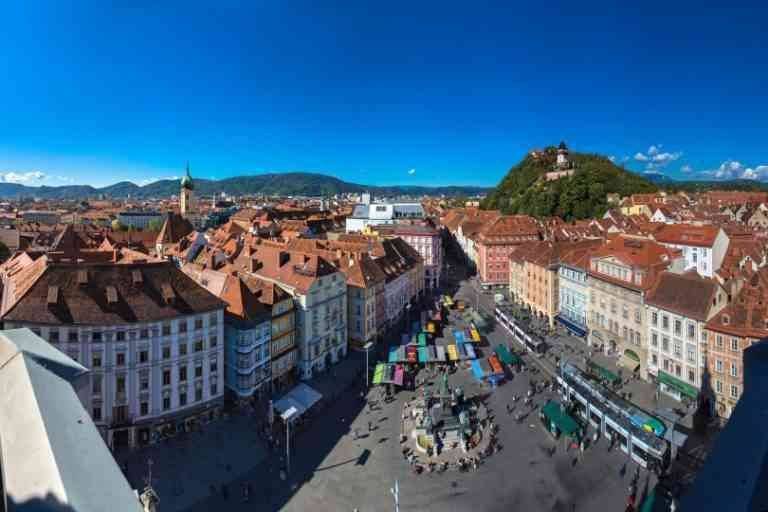 As evidenced by its name, it is a very old city located within the neighborhoods of Graz, a city of great beauty and splendor and one of the most famous tourist attractions in Austria. The city, and the city is not only beautiful in terms of form, but historically and culturally beautiful, and UNESCO has endorsed one of the most important world heritage sites because of its history, calmness and charming beauty. Read also: Travel Tips to Austria .. 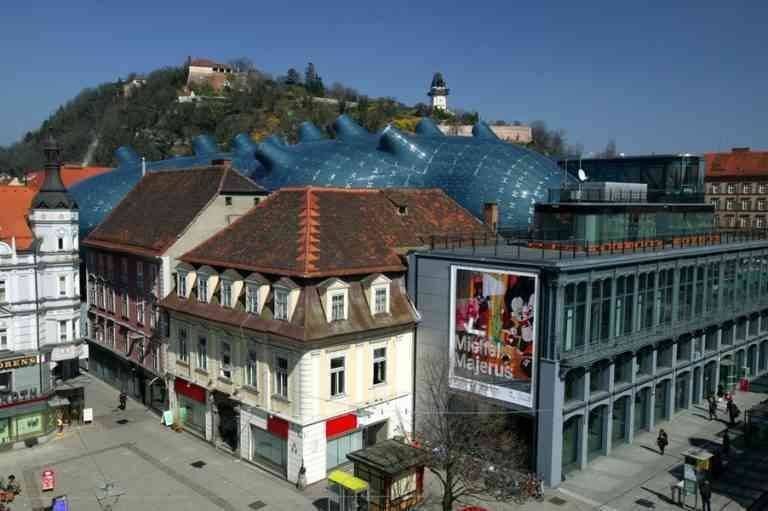 The island of Murinsel .. the most beautiful architectural shell in the middle of the river 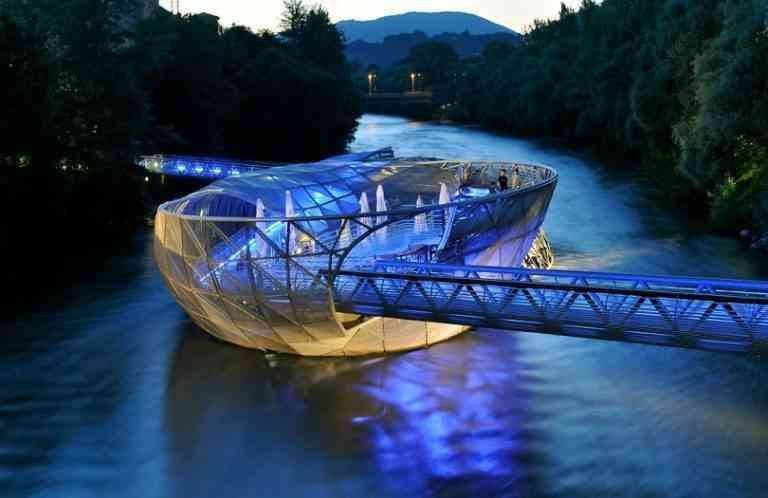 It is one of the most beautiful islands in the world, and attracts huge numbers of tourists every year from different parts of the world. It is worth noting that the American artist “Veto” was the one who designed this island in 2003 when Graz was chosen as the second capital of Austria after Vienna, and it was called The second cultural capital.
And that island is located specifically in the middle of the Murr River, and it was built using a glass steel material in the form of a beautiful open shell that is characterized by transparent blue color, as well as the splendor and beauty of its beautiful scenery that constitute a great attraction for tourists to visit from all countries of the world, and also to enjoy what is held It has many important and happy parties and events in its beautiful halls, especially since that island connects the banks of the city of Graz to each other. Read also: cabarets in Austria …. 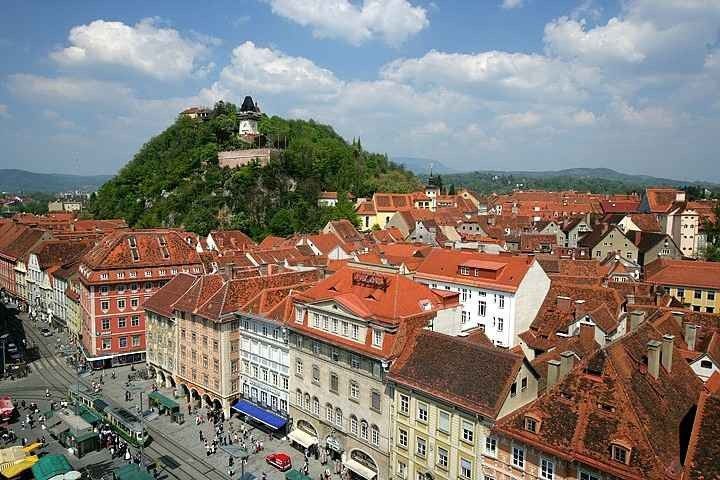 The village of Schulesberg is considered one of the most beautiful Austrian villages located in the city of Graz, because of its wonderful archeological and entertainment attractions, and among those attractions we find the old clock tower, the Garston Museum, and also a group of the most prominent distinctive caves with stunning landscapes, and the famous Baroque Museum is One of the highlights of that village is the museum, which contains a collection of distinct design towers. 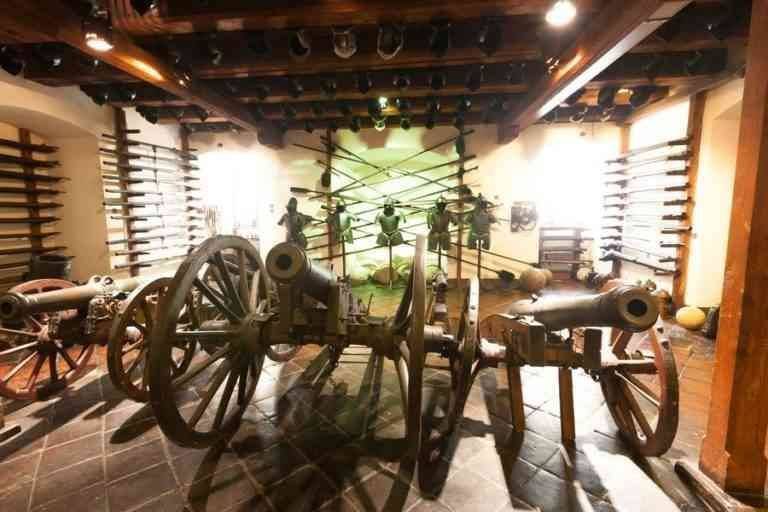 The city of Graz includes a famous weapons warehouse dating back hundreds of years, displaying various types of ancient, conventional, primitive, modern weapons and other tools that were used in wars and self-defense throughout the ages. This warehouse contains the largest collection of weapons, reaching more than 32 thousand A piece of distinctive and unique weapon.

Shopping in the city of Graz

The city of Graz is famous for the movement of buying and selling and its containment of various products and commodities from all over the world. The city is distinguished by its many main and branching streets and what it contains from each of the places and shops and other platforms for selling products, offers, gifts and other fashion, toys, antiques and everything that a person may need from the centers Global, and those markets are distinguished by the offers of tourists, offers, gifts and discounts, and therefore leave a significant impact in the hearts of all visitors.

Tourism in Seville .. Find out the most famous tourist places in the most beautiful Spanish cities.