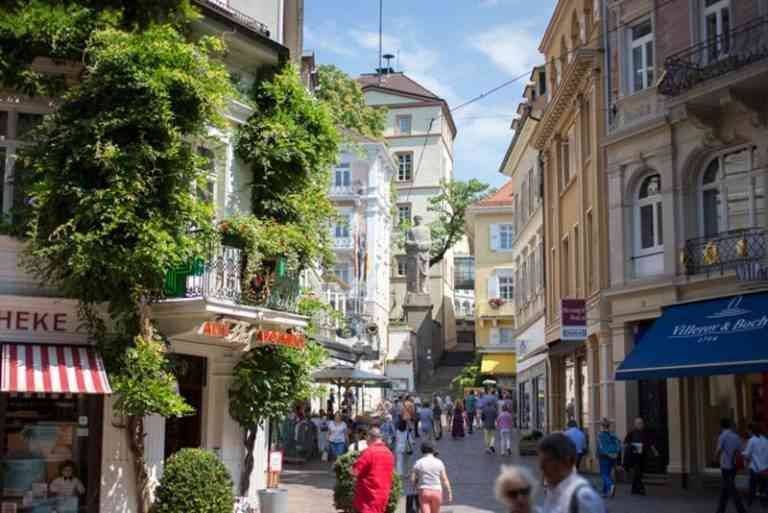 The Baden-Baden region is one of the most famous tourist destinations in the Black Forest region, and it is one of the most beautiful places; it is characterized by its mild climate adorned with many hot springs, and Baden Baden is one of the most popular tourist destinations in the world, where it has managed over the years It is a long time for each year to attract large delegations of tourists in different passions. Some of them are adventurers, and some of them wanted entertainment only, and some of them came to seek the opportunity to treat themselves in the waters of its famous hot springs, and the region has been receiving visitors from all sides, as well as explorers and researchers in various sciences, since that The Roman grate to the present day. Tourists can easily reach the Baden-Baden region through the available means of transportation, and after arrival, one can enjoy the finest luxury resorts such as the Friedrichsbad resort, which is distinguished by its beautiful environment and built in the unique Roman style, which is 170 years old, and Baden Baden has Many public baths at reasonable prices, which made them very popular, as they used to receive many sports delegations and sports enthusiasts, especially adventurers, hikers, hikers and others, but in the winter they attract huge numbers of skateboarders. From the top to the bottom of the forest. Read also: Customs and traditions of Germany .. 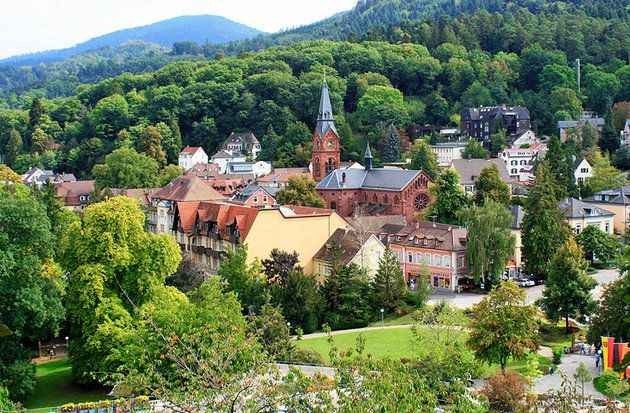 This region crosses one of the main gates to enter the southern black forests and one of the most important and famous tourist attractions, and the Freiburg region is characterized by its surrounding hills covered with dense pine trees, and this region is characterized by its many small streams that spread inside the city limits, and these tables run like this Since ancient times, and still to this time flow in the streets of the old town, and when visiting this region, the tourist may find room to explore the rest of the beautiful city on foot.

Freiburg Cathedral .. The oldest church with the most beautiful tower in the world 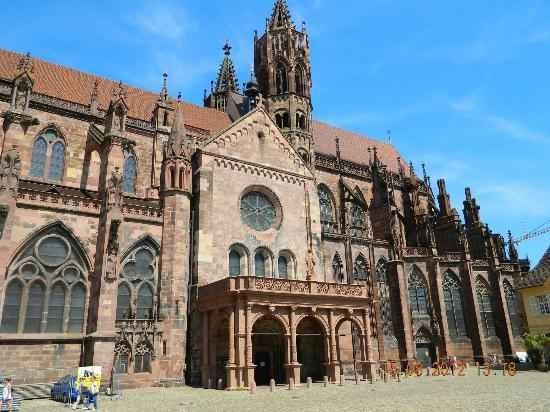 Built between the 13th and 16th centuries, this cathedral is one of the masterpieces of Gothic architecture in Germany, and it has many beautiful artworks, including stained glass found in the famous corridors dating back to the year 1512, as well as its famous tower Which has been described as the most beautiful in the world, and the height of this tower about 116 meters, and whoever has the opportunity to climb up the tower will inevitably enjoy a terrible amount of wonderful views of the old city. Read also: travel advice to Munich … 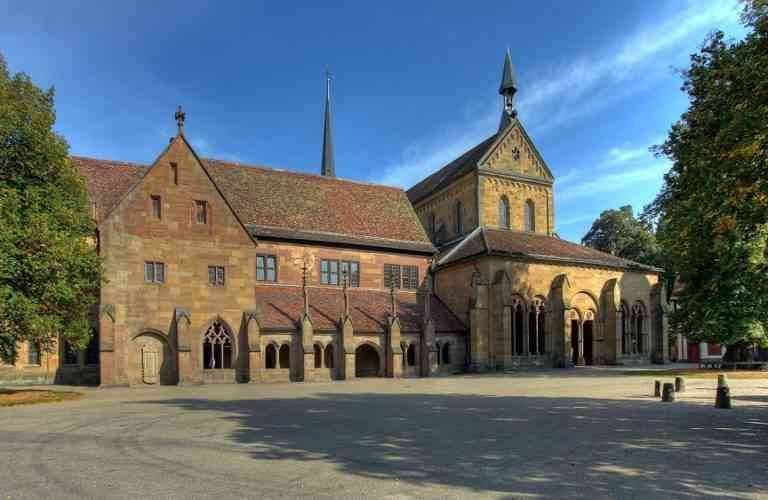 Kloster Maulbronn is among the most famous landmarks of black forests that any tourist can enjoy visiting, and Kloster Maulbronn is located 18 km northeast of the city of Pforzheim, in which the small town of Maulbronn is located, and Kloster is considered to be the home of the famous Cistercian monastery that attracts many tourists. In the year 1147 AD, it is one of the most beautiful and oldest German monasteries, to the point that the monastery was designated by UNESCO as a World Heritage Site, as well as one of the most prominent landmarks of Kloster Maulbronn that the large central courtyard surrounded by the half-timbered buildings, and these buildings are the famous ones that tourists prefer to see and pick up Photographs next to it, perhaps the most prominent of these historic buildings are those that were built in a transitional design between the romantic building and the Gothic building, and such designs are known as “Paradise”, where they contain a balcony like the Saint Mary’s Church balcony, and when visiting Kloster Maulbronn the tourist finds a variety of morning tours amid Dark green morouj accompanied by distinguished tour guides and a high degree of experience and efficiency.

The State Art Gallery .. The most beautiful paintings and rare scenes 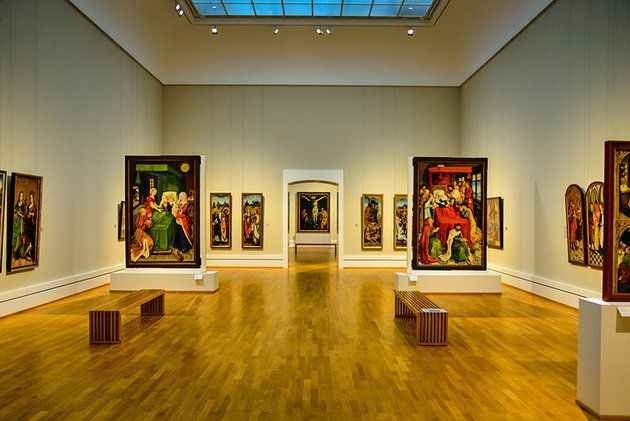 When talking about black forests, the scenery should not be confined not only to stunning landscapes, dense forests, pine trees and hills, but also beautiful artistic and recreational landmarks that fill the area, and perhaps the most famous of these landmarks is the International Art Gallery and it is really one of the most important and famous tourist places in the black forests This exhibition is precisely in the town of Karlsruhe, where many delegations from the most famous artists and tourists visit it every year, and this exhibition contained a number of the most important, famous and most beautiful paintings in the world. This exhibition is concerned with the presentation of famous German art and drawings from 1890 to the present day. However, the exhibition is interested in presenting French impressionist works such as TV Monet, Cézanne and Degas, and the exhibition also includes many outstanding works of the modern Baden School, the Children’s Museum of Fun, and a wonderful collection of French paintings that have emerged since the 17th and 18th century, and the exhibition includes A museum called “Hanztuma” which is interested in displaying the unique landscape paintings presented by Hans Toma, including the famous rain town of the Black Forest. Read also: Tourist attractions in Frankfurt

The Picturesque Town of Pforzheim … the most beautiful black forest city 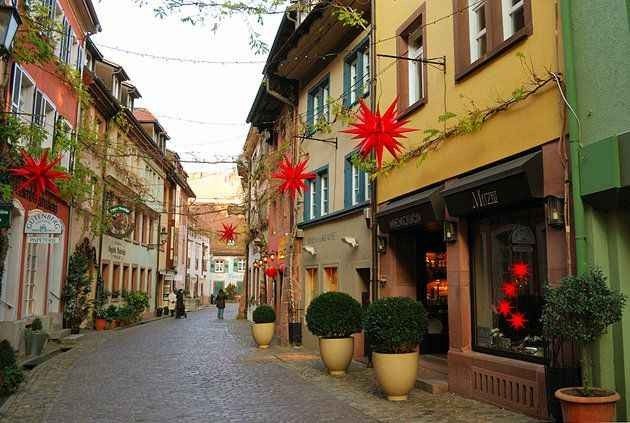 Pforzheim is one of the most beautiful cities of black forests, it is famous for its cleanliness, the spread of bright colors, exquisite decorative scenery and fine artistic sculptures everywhere. Pforzheim is also famous for gold and jewelery, and the town of Pforzheim is located specifically on the northern margin of the Black Forest at the confluence of the ENZ, Nagold rivers. Pforzheim is the excellent base from which tourists can explore the beautiful valleys, rivers and exquisite springs north of the Black Forest. This beautiful city is a suitable focal point for the launch of three Ridgway trails For the Black Forest, it also includes the old tower and the palace church, the beautiful old market square overlooking many shops, cafes and beautiful old churches such as the Roman Church of St. Martin, and a number of ancient Roman ruins, some dating back to the second century, such as Roman villas. 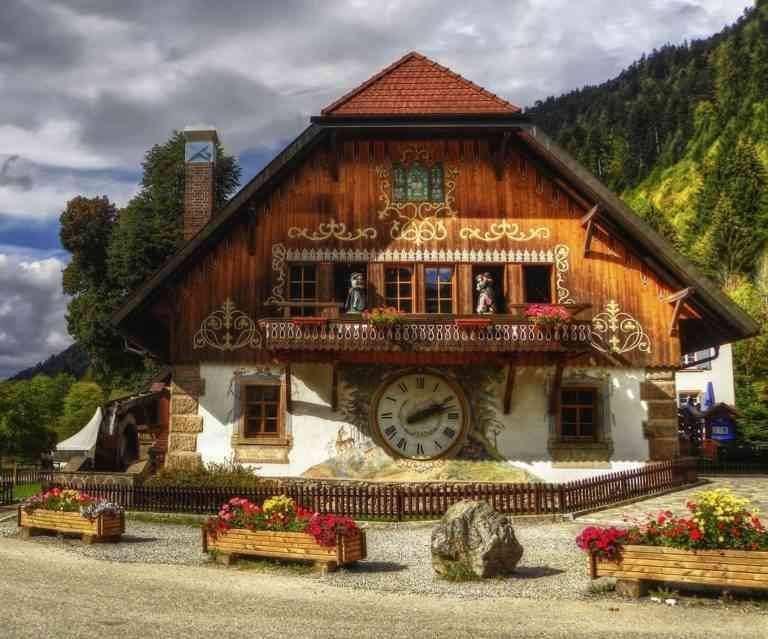 Also in the Black Forest there is the famous Museum of the Black Forest Museum, which is one of the most important tourist places in the Black Forest, which includes more than 18 rooms for unique display, and in this museum a number of lifestyles and traditions are displayed in the unique Black Forest region, where it contains many memorabilia Ancient arts and crafts, as it contains many pieces of furniture and personal antiques, and this museum is characterized by its wonderful design and its famous clock, in addition to the unique features, decorations, objects and souvenirs inside it inside. Read also: travel advice to Germany ..

Donaueschingen and the Source of the Danube 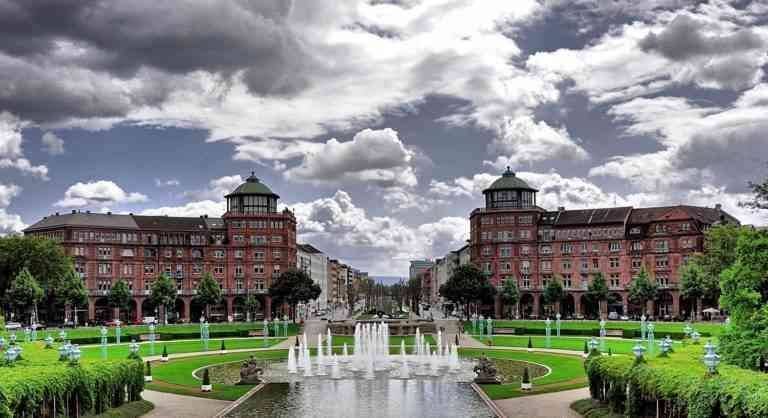 This region lies precisely at the eastern margin of the black forests overlooking the River Bresche, and is located alongside Donauquelle to form the Danube River. Donoxingen is located on the eastern side of the city, where it features distinctive luxury apartments and a number of hotels and houses that contain full furniture and furniture, next to the festival The popular periodically inaugurated to showcase the best types of contemporary music, and the Donaueschingen Park is also one of the beautiful gardens that deserve to be visited, which is an essential habitat for the source of the Danube River. middle Ages. 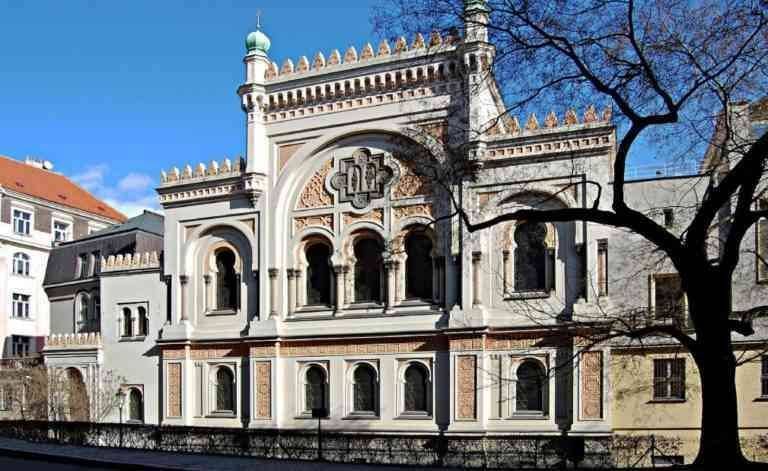 This museum was essentially a famous church called the Augustinian Monastery, and over time there have been some changes and developments until I become a museum, and it is worth noting that this museum holds several awards and includes many interesting works dating back to the Middle Ages, especially the Baroque era, and also includes On many original stone models from Freiburg Cathedral, as well as a number of famous wooden sculptures, paintings of the famous painters “Matthias Grunewald” and “Lucas Kranakh the Elder”, and the museum halls include a number of nineteenth century paintings. 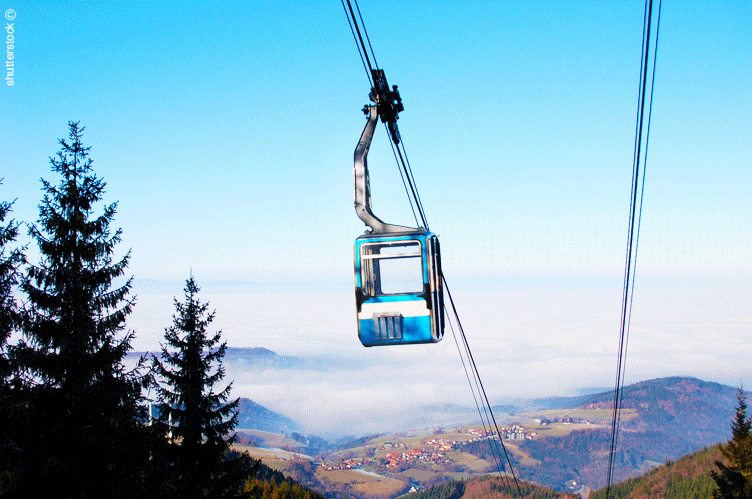 It is the longest cable car in Germany at all, with a height of about 3600 meters, and the journey takes only about 20 minutes to climb 750 meters, after which it rises another height of 1220 meters, and tourists around the world enjoy this wonderful experience in the cable car that passes by Some of the wonderful scenes that the tourist sees from the top with amazing and frightening suspicion for some makes them hold their breath, and many adventurers and travelers are keen to ride the cable car to enjoy the view from the top and see panoramic views of the city of Freiburg, the Rhine Valley, and the foggy blue strip of the Vogue Mountains in France. It is a comfortable and environmentally friendly mountain climb to the summit of the Chau Ins Land. Read also: Tourism in Dusseldorf …

Europa Park .. The most beautiful theme park in Europe after the French Disneyland 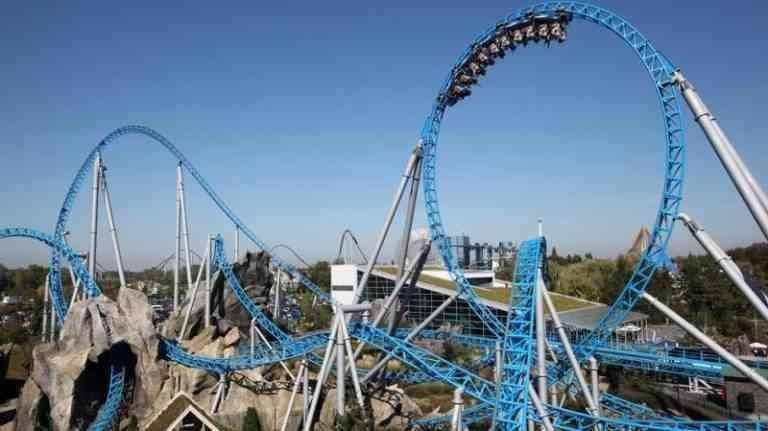 Europe Park is one of the largest recreational parks in Germany, as well as it is the second most entertaining resort in Europe in terms of fame after the Disneyland city in Paris. Europe Park is located in the famous village of Rust in southwestern Germany between Freiburg and French Strasbourg, which helped to fame This park includes about 12 roller coaster, and the Benixpress Main Train is the oldest, and the most recent is Arthur, and all roller coaster and Europa Park attractions can accommodate large numbers of 50,000 visitors and more per day, and statistics say that in 2011 the number of visitors reached 4.5 million Visitor with us The gross revenue is estimated at 300 million euros, which gives Europa Park an international reputation as the headquarters of the Euro Dance Festival. The park also includes a very beautiful interior garden that was opened in 2014, and a large number of games and characters were designed The famous near the enchanted forest in the park, where it was agreed with the famous French director “Luc Bessot” and his own film production company, and permission was obtained to start planning the construction of a huge game that is a mixture between a traditional model of the game suspended in the dark and a huge roller coaster, so that Available to the tourist a Visiting internal and external experience and sound on the game board and the possibility of the vehicle to spin and float with special effects person feels like a fantasy.