All about Omani beaches

The Omani beaches are one of the most important constituents of the natural tourist attractions in the Sultanate: The Sultanate’s coasts – which amount to more than (1700) km with its breathtaking beauty, cleanliness and calmness – constitute tourist resorts that visitors visit to enjoy their beauty and spend their free time for fun and recreation. The most important of these beaches: 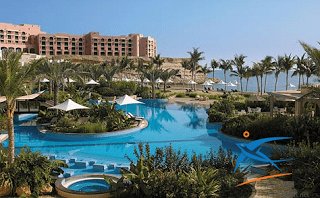 One of the beautiful beaches of Muscat Al Bustan Beach .. This typical beach in which the Al Bustan Palace Hotel is located and the beach extends a great distance on the sea coast and is surrounded by mountains on every side except the road leading to it and the beach overlooking the sea .. This nature increases the beach privacy on its privacy. There are many beautiful beaches that are located on the coast of the Governorate of Muscat, including the beach of the sea road near Sultan Qaboos Port, which is overlooked by beautiful mountainous rock forms and its background represents multiple aesthetic forms .. The body of the censer (the censer) overlooks it from above and next to the garden of Riyam, complementing the splendor of the beach. And its beauty with its trees and flowers that smells pleasant smells, green spaces and children’s toys. Next to the park, hotels and restaurants are spread near the beach alongside the popular Muttrah Market .. Seats and umbrellas are spread along the beach to Sultan Qaboos Port .. Fixed with beach fences are three-dimensional artistic portraits of birds, animals and fish .. The beach has all the services and facilities that have been set up for the convenience of visitors. Where his administration is concerned with organizing sports and water competitions such as kayaking, windsurfing, rowing, and others.
Al-Jissah Beach: 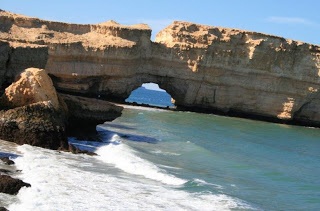 It is distinguished by its clean silver sand. And the mountains around it block the wind. And visitors to this beach can enjoy sea tours in the small boats scattered on the beach. It is characterized by calm and calm waters and seabirds, and the mountains around it, and from the sea side, the beach has three entrances through two small islands inside the water that constitute a wonderful natural landscape. There on the beach small boats for fishing and other marine outing. In the background of the beach are the palm trees scattered in soft sand and a garden with basketball and volleyball courts, children’s games and places to rent small boats for wandering and marine excursions, in addition to the tourist facilities and services that were prepared to serve the beach visitors. And diving enthusiasts can practice their hobby sport fun. The Omani Diving Building has been constructed on the beach of Al Jissah, which has all the potentials for diving. There are other beaches in Muscat, such as Ras Al Hamra, Bandar Al Khairan, Yiti, Al Harmel, Darset and Aint.
Crimean Beach: 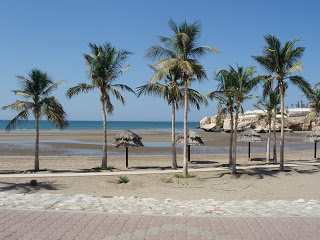 This beach stretches a long distance and is characterized by the splendor of its beauty and has been built alongside a number of large hotels such as the Gulf Hotel and the Muscat Intercontinental Hotel and this beach is one of the most crowded beaches of Muscat for visitors.
Al-Sawadi Beach: 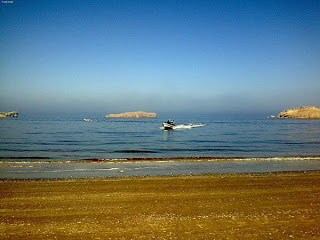 As for the Al Batinah region, especially the Al Sawadi region, the visitor finds a beautiful beach with its fine golden sand. When traveling around a boat and a few meters away from this beach, there are several islands characterized by the beauty of nature that allows the visitor to spend a quiet day away from the noise of the city.

Sohar Corniche
And in Sohar, where the sea road overlooking the coast was established along the historic Sohar Fort, along the beautiful road are restaurants, restrooms, guide boards and umbrellas for seating. On one of the corners, a small garden was built for visitors.

As for the beaches of Musandam Governorate, they are characterized by abundant creeks and high mountains adjacent to the province’s beach, which extends to the Strait of Hormuz with its impressive view. The most beautiful beaches of the province is the wonderful Gulf of Sham, and the one who exhausted him from the trouble of a week of work can relax and spend his vacation in excitement and adventures on the sandy beaches of Sham Bay, where he can enjoy watching mountain height directly from the sea surface to 2000 feet. The beaches of the governorate are distinguished by the presence of nature’s treasures under the sea, and diving enthusiasts can enjoy watching the rare aquatic life. And for fishing enthusiasts Musandam Governorate is considered one of the richest areas in this field, where this hobby can be practiced by traditional methods of fishing with an hook.
Beaches of the eastern region:
The middle region is characterized by a group of beaches that are different in nature and topography, some of which are surrounded by rocks in an artistic image closer to the natural umbrellas of the area (Ras Musraka and Al Shuair) in the state of Duqm, while others are characterized by its soft, clean sand, such as the beaches of Jazir and Mahut, and they all participate in moderate weather that tends to Blowing cold breezes accompanied by light mist, which makes it one of the most beautiful beaches in the world.

Central Beaches:
The middle region is characterized by a group of beaches that are different in nature and topography, some of which are surrounded by rocks in an artistic image closer to the natural umbrellas of the area (Ras Musraka and Al Shuair) in the state of Duqm, while others are characterized by its soft, clean sand, such as the beaches of Jazir and Mahut, and they all participate in moderate weather that tends to Blowing cold breezes accompanied by light mist, which makes it one of the most beautiful beaches in the world.
Dhofar Governorate beaches:

Dhofar Governorate is characterized by attractive and unique beaches where there are crowded lagoons of flamingos, as well as caves and winding entrances. The most important beaches of the province are Al-Mughassil and Raysut, which are characterized by the purity of its sands and the creativity of the creator in the beauty of the surrounding rocks and the picturesque nature … There are mounds such as Solei Creek, Al-Balad Creek, Al-Dahriz Creek, Atheeb Creek, Salalah Creek and Karkhal Creek, which is characterized by the presence of flamingos in abundance. For fans of diving and surfing, the governorate’s beaches are among the most important beaches in the Sultanate for fans of these sports. These beaches and hills are easily accessible to provide paved roads as well as other services. 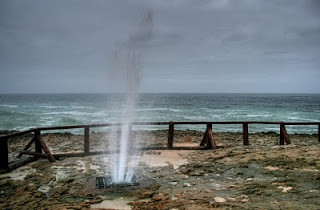 It is located 37 km west of Salalah, on Raysut Road, turn right, and it includes a trekking center, which includes four lounges, the tourist beach Al Maghsil restaurant, and the beach is spacious, clean and suitable for trips. There is also the huge cave of the Marinif, and steps away from it are the natural fountains, which result from the movement of sea waves colliding with rocks, one of the masterpieces of Dhofar, which is unique to others.

My trip to Germany and Austria