The 5 best Arar restaurants in Saudi Arabia, which we recommend you to try

Where is Mumbai and the most important cities near Mumbai

The most beautiful 5 of the recommended hotels in Kuwait 2022

My trip to Johannesburg

How to get to Bosnia

Spain remains one of the most beautiful European and even global countries because of its rich history and picturesque nature in a distinctive strategic location west of the continent on the maritime borders off the African coast, which made it subject throughout the ages to different periods of government, whether Islamic or Christian, which are still visible to this day on The form of tall tourist attractions, we show you the most important.

Church of the Sagrada Familia 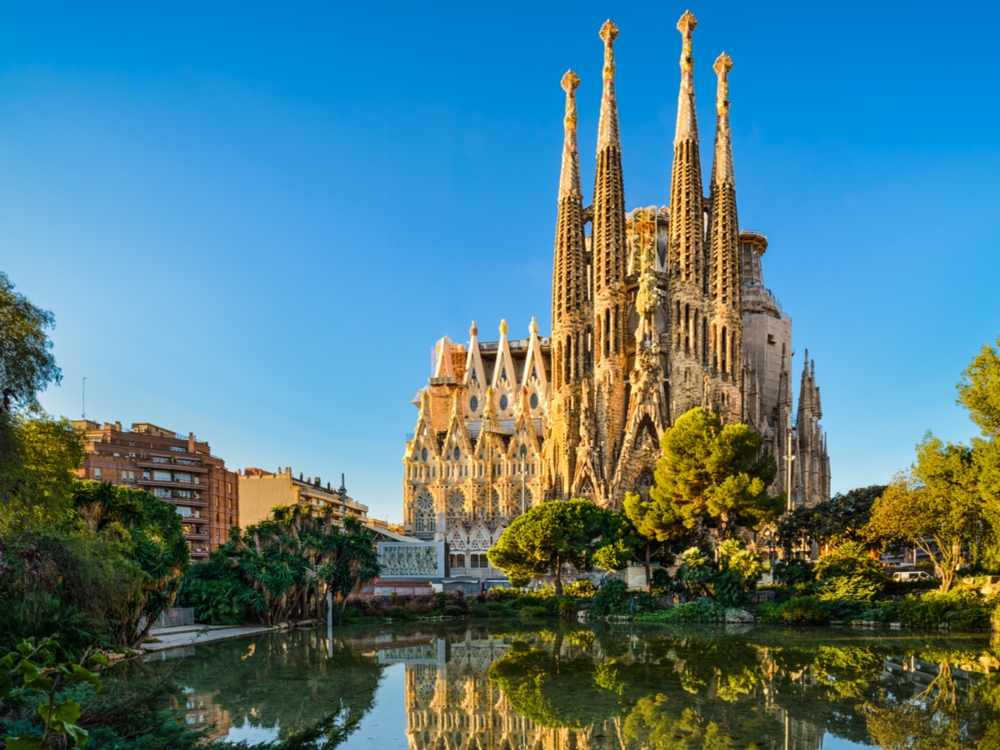 Or what is called the Holy Family Church … It is a Romen Catholic Church located in the Sagrada Familia district of Barcelona, ​​and remains one of the largest churches in Europe. The international Antonio Gaudi, who devoted fifteen years of his life to building it until his death, is expected to be completed in 2026, 100 years after the death of the designer, but nevertheless was chosen in 2007 among the list of Spain’s twelve treasures. The Sagrada Familia includes three major facades, the façade of birth in the east, the façade of pains in the west, and the façade of glory in the south. 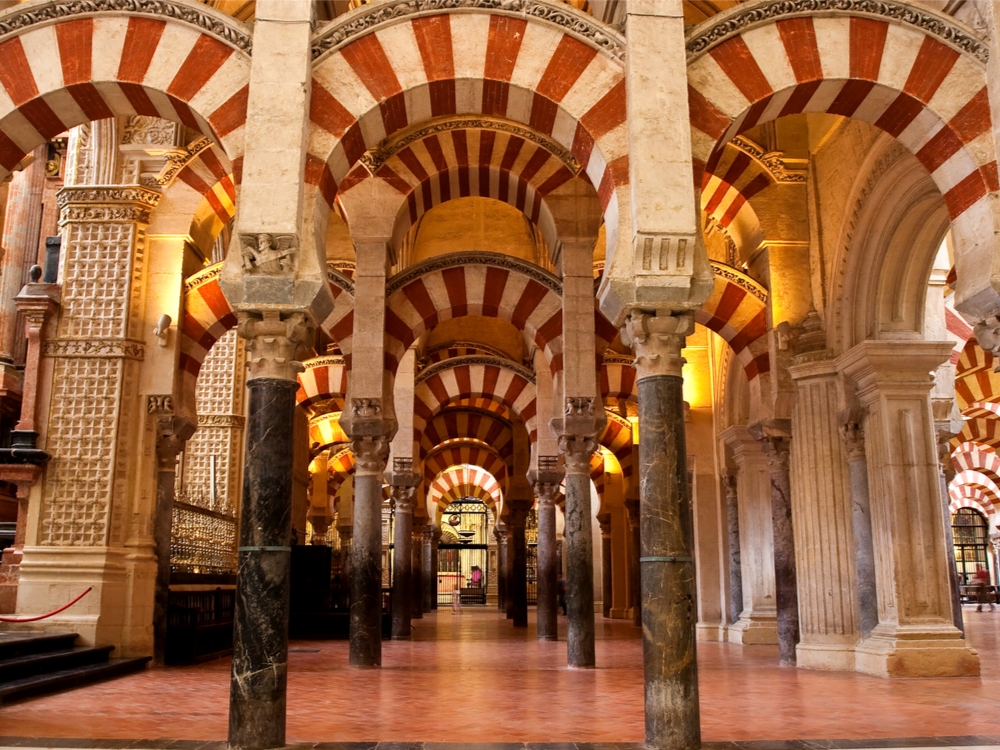 It is called the Cathedral of Our Lady of Transition, and it is known by the inhabitants of Cordoba as the Mesquita Cathedral, which in Spanish means that it is a mosque, because its location was originally a pagan temple, then it turned into a Christian church during the time of the Visigoths, then to a mosque during the rule of the Umayyads, which was called the Mosque of Hadra and was launched He has the title of “Joy of the Ages”, then to a church that follows the Romen Catholic Church, but maintains a large part of its original construction as a mosque to this day, and it is considered one of the most famous monuments of Islamic architecture in the country, as it has always been a model for the intertwining of Islamic and Christian architecture, which made it Standing topping Spain treasures of the twelve.

Read:The largest museum in the world 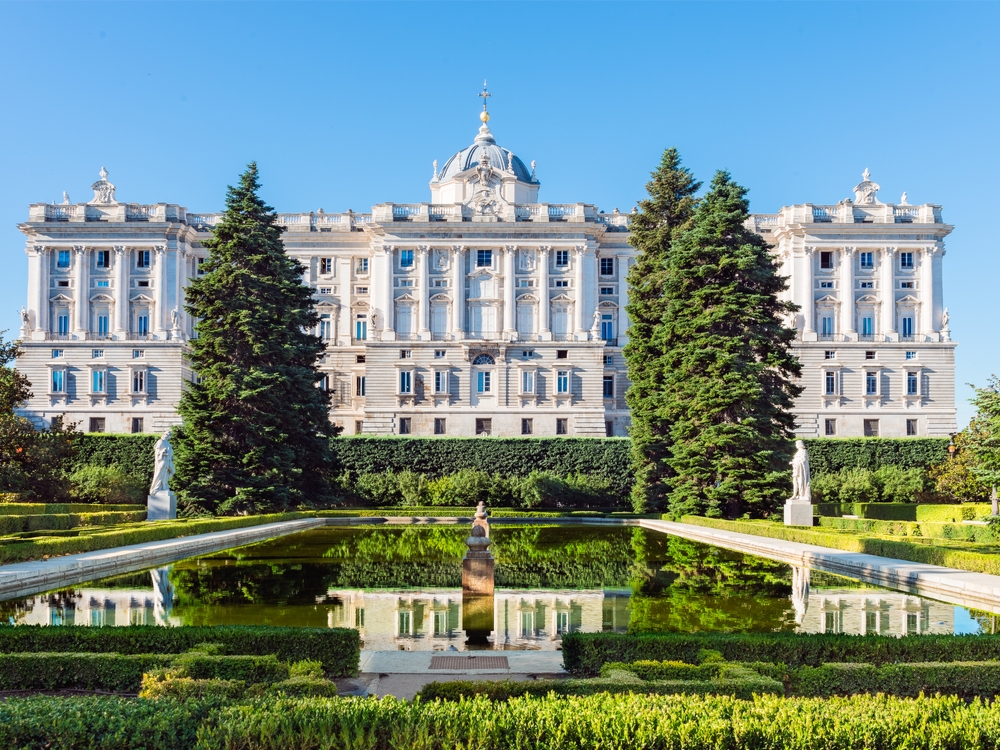 It is a royal palace and it is also called the Oriental Palace as it is located in the Orient Square in the heart of the capital Madrid. It was built between the years 1738 and 1755 by order of King Philip V, and became the residence of King Carlos III in 1764, and is famous for being the official residence of the Spanish kings since then, but the building is currently not It is more than a palace with only honorific functions, as it is used only in hosting ceremonies and ceremonies, and is the largest royal palace in the world in terms of floor space. 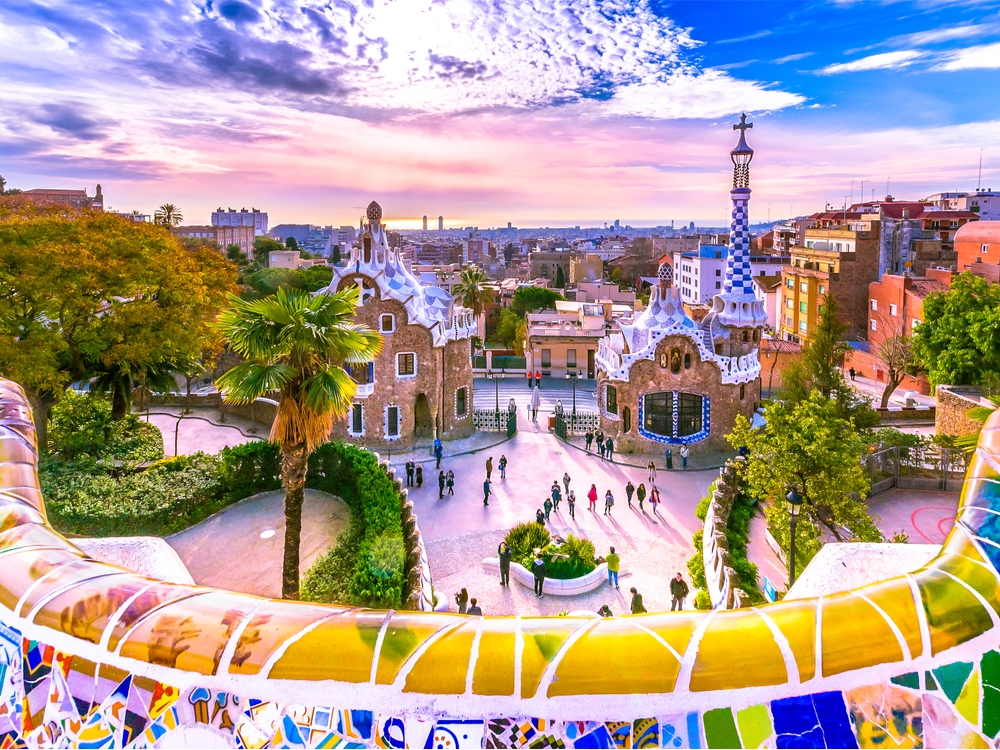 This park is considered one of the most prominent tourist attractions in Barcelona, ​​and one of the most beautiful heritage parks in Spain, and it is a beautiful architectural sign that expresses Iraq with its historical monuments and modernity with its attractive color designs. This large architectural building was built between 1900 and 1914 by the Spanish businessman “Ossebe Joel” as a park complex, each with its own portal decorated with stairs decorated with Catalan art. It also includes landmarks and artifacts that reflect the marvelous development of art and urbanism in the city.

The Alhambra in Granada 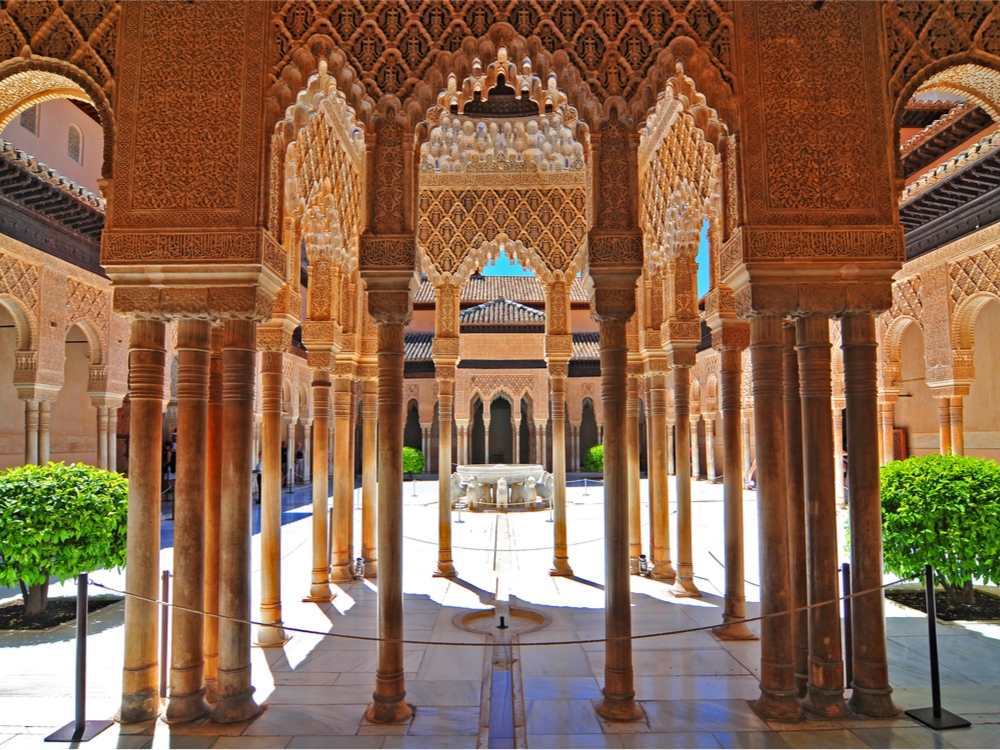 It is a palace located 430 kilometers south of Madrid, and was built by order of King Abu Abdullah Muhammad I in the Kingdom of Granada, and the beginning of its construction dates back to the fourth century AH, and it took more than 150 years to build it. The Alhambra Palace, also called “Alil Al Noufous”, is considered one of the most important tourist attractions in the country, due to its distinctive features of Islamic architecture, such as the use of decorative and geometric elements, and distinctive inscriptions bearing Quranic verses, in addition to decorations of colored plaster. The Alhambra Palace was chosen in the fourth year of 2007 in the list of twelve treasures of Spain. 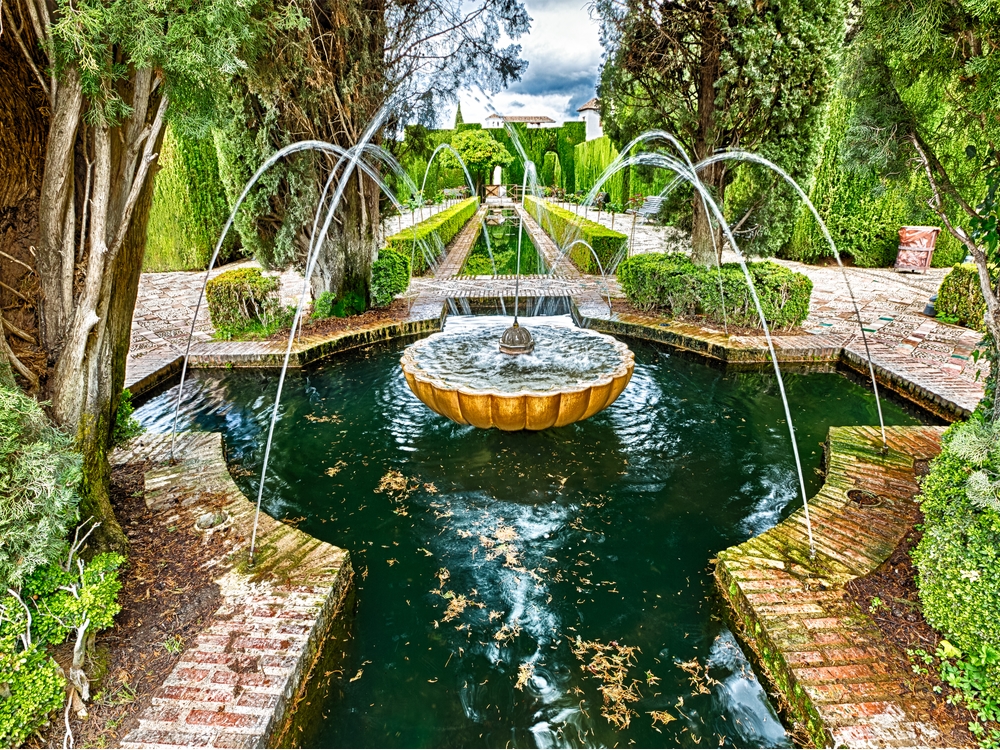 It is a summer palace built in the late thirteenth century AD on the hillock of the sun northeast of the Alhambra Palace and one kilometer away from it, and the corporal paradise or what it means “architectural gardens” remains an independent archaeological group, there are four orchards, which were taken by the kings during the rule of the Nazareths in The Principality of Granada in Andalusia is a park for rest and recuperation.
The palace is characterized by being decorated with many Islamic inscriptions, including the orchards, squares and courtyards decorated with winds and very beautiful flowers, which make it one of the most famous landmarks of Granada, and one of its most important monuments that still retain its unique Andalusian character.

Read:Where do I go in Baku 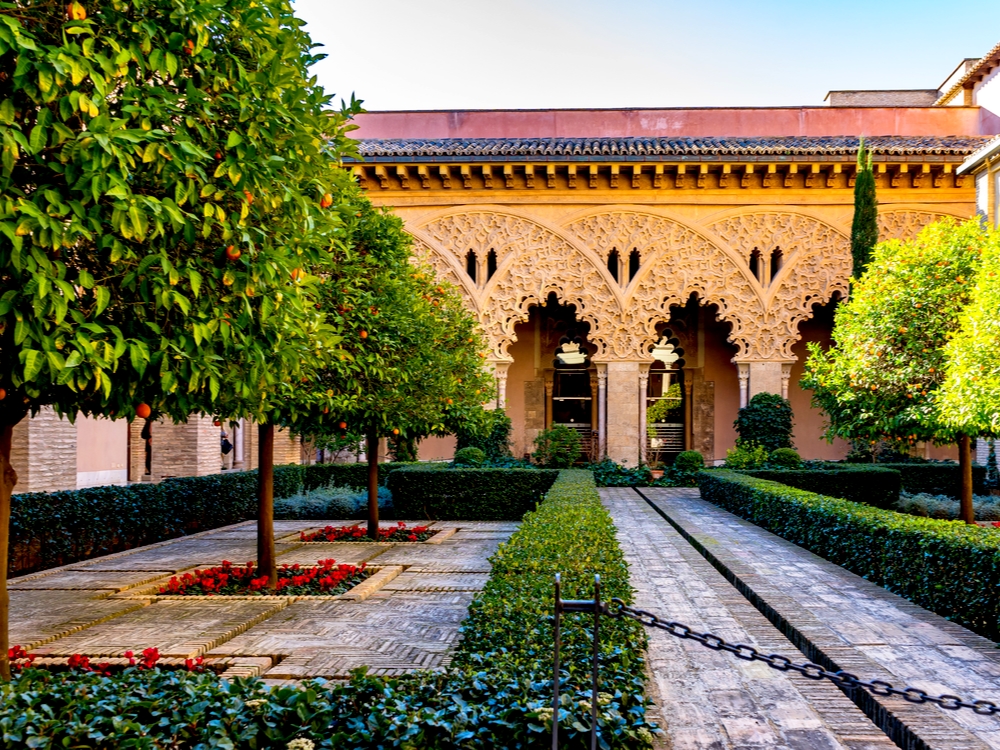 It is a palace built in the fifth century AH during the reign of Muqtadir bin Hood, Prince of Zaragoza. It still stands tall and bears witness to the political and cultural heyday of the emirate at the time, and its importance is that it is the only building of this size that has been preserved to bear witness to the Andalusian Islamic architecture from the era of the kings of sects, as it reflects the sectarian art in the period of independence from the Umayyad rule, forming with both The Mosque of Cordoba and the Alhambra Palace is an architectural trilogy in Andalusia. And the lobby, called the Gold Council, was one of the most amazing of it, because its walls are decorated with golden inscriptions. 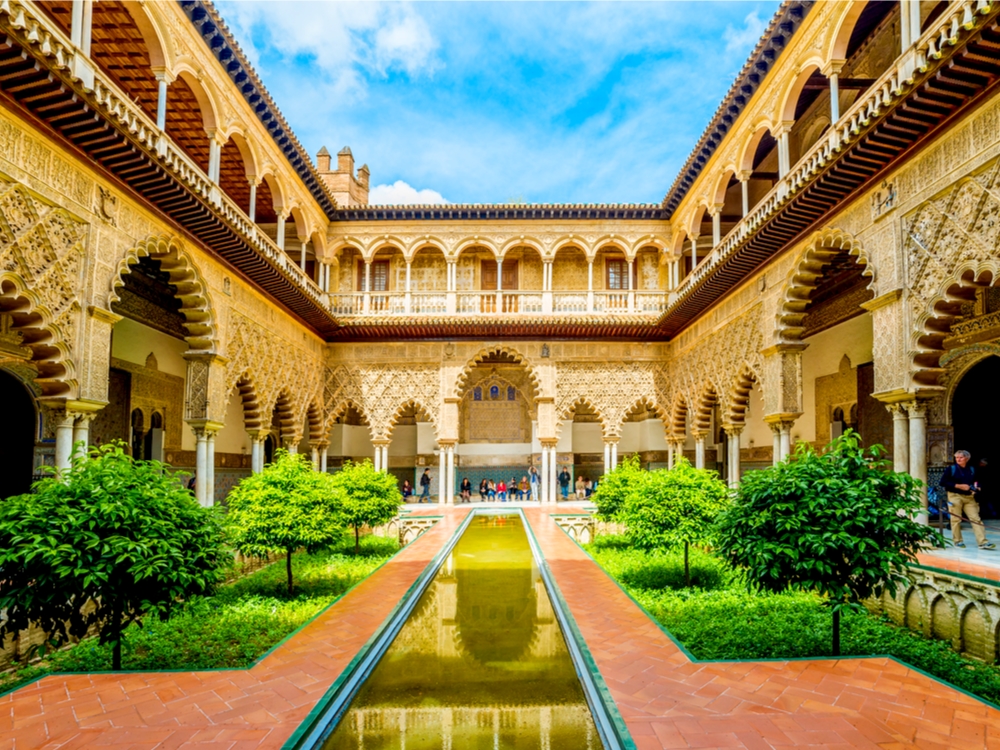 It is the palace of the leafy or the blessed palace, or, as it is known recently as the royal palace of Seville, it was originally a fortress of Mori, and it is the oldest royal palace still used in Europe, as the higher levels of it are still used by the royal family as an official headquarters in the city. Its historical value is that it is one of the best surviving examples of the architecture of the Savior, or the Muslim Moors who remained in the Christian areas after the War of Recoveries, but later kings added to it their own touches, which makes it to this day it is characterized by its mixing of various Arab and Islamic architecture with those European Gothic. 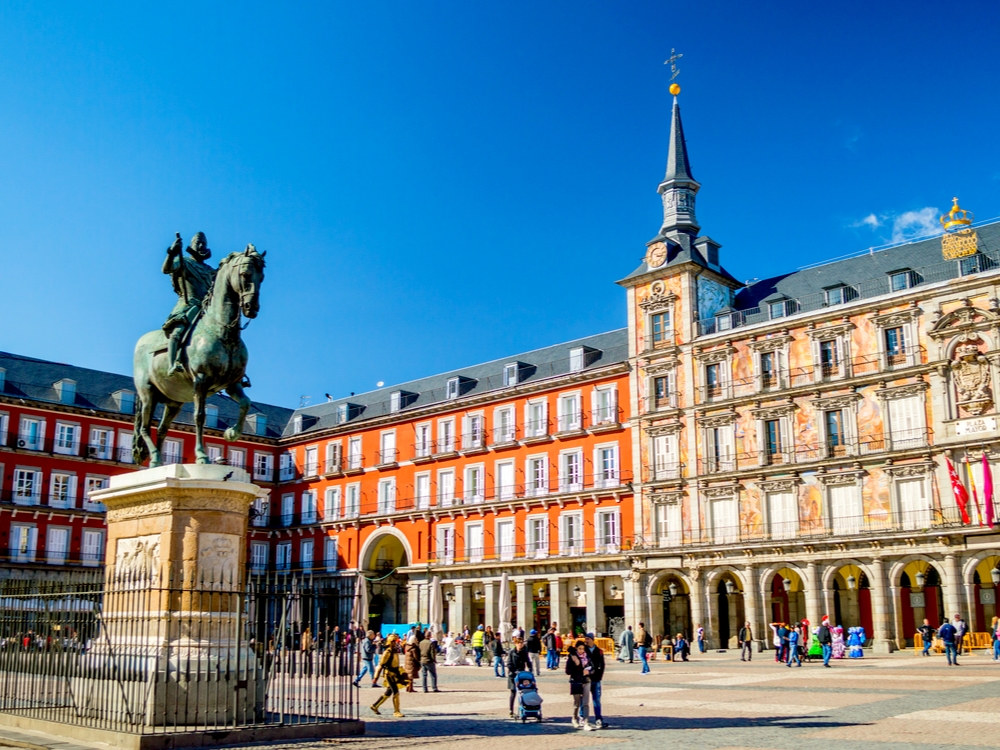 This square is the heart of the capital Madrid and one of the most important and largest squares in the city and in the entire country. Although it is now dedicated to the revival of official and traditional ceremonies of the state, its historical importance lies in the fact that it opened during the reign of King Philip III in the seventeenth century to be a yard for executions, but then it became a yard for bullfighting, before it became the tourist attraction that it is now. Overlooking the square are approximately 136 houses and about 437 balconies, surrounded by ancient religious buildings and monuments, which give its visitors the ability to learn about the architectural style of the ancient Spanish building. 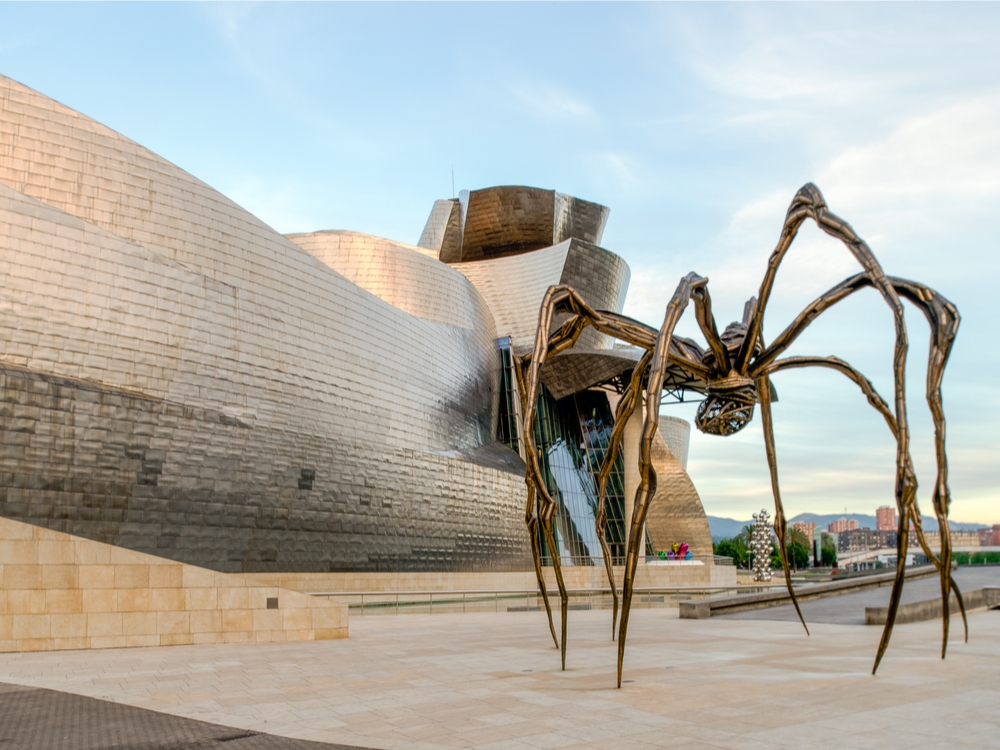 It is a museum of contemporary art and one of the largest museums in Spain, located in Bilbao in the Basque Country on the banks of the River Nervion, opened in 1997, and hosts exhibitions of artworks by Spanish and international artists, designed by Canadian architect Frank Gehry, the museum is famous for its strange architecture, It is characterized by being one of the finest buildings of deconstructive architecture, and takes the form closer to a giant ship, while the titanium panels formed to the outer surface and reflected to the sunlight resemble fish scales. The museum was chosen in 2007 as one of Spain’s twelve treasures, and it won the European Cultural Label award for 2020. Its mission is to collect, preserve, search and present contemporary art works in its historical context.

The best tourist activities in the Seychelles Islands

The best Chinese food, including appetizers, main courses and desserts

Where is Zanzibar and cities near Zanzibar?

Learn about the weirdest customs and traditions of Germany

What is the capital of Djibouti

9 italyn cities are worth a visit