The largest cruise ship in the world called “MS Symphony of the Seas” is a Oasis cruise ship owned and operated by Royal Caribbean International, as of June 9, 2017, and it has become the largest passenger ship in the world with a total tonnage of 228.021 tons, bypassing its sister Harmony Of the Seas “MS Harmony of the Seas”, an Oasis-class cruise ship built by STX France, at the Chantiers de l’Atlantique shipyard in Saint-Nazaire, France, for Royal Caribbean International, with a total tonnage of 226.963, which is The second largest passenger ship in the world.

Description of Symphony or The Seas

The ship is 1,188 feet (362 m) long and has a total tonnage of 228,081 in 18 floors. It is able to accommodate 5,518 passengers in double occupancy up to a maximum capacity of 6,680 passengers, in addition to a crew of 2,200 people. Facilities include a children’s water park, a playground Full-size basketball, an ice skating rink and two rock-climbing walls are 43 feet tall, and there is also a “central garden” containing more than 20,000 tropical plants. Alexa, Carlos and Ocean Benevega were chosen as the ship’s maids, the first in the cruise industry, and the ceremony will be held In Miami in November 2018.

During its first season, the ship will sail from Barcelona in Spain, for seven days cruises in the western Mediterranean, and on October 28, 2018, it will return to the port in its home, the port of Miami in Florida, USA, and in November 2018, cruises will begin Caribbean, and when Symphony of the Seas arrives in Miami, you will sail on an East Caribbean trip from Miami to Philipsburg in Saint Martin, San Juan, Puerto Rico, Labaday, Haiti, and you will also sail on a trip to the Western Caribbean to Roatán in Honduras, Costa Maya, Mexico , Cozumel, Mexico, and Nassau, Bahamas. 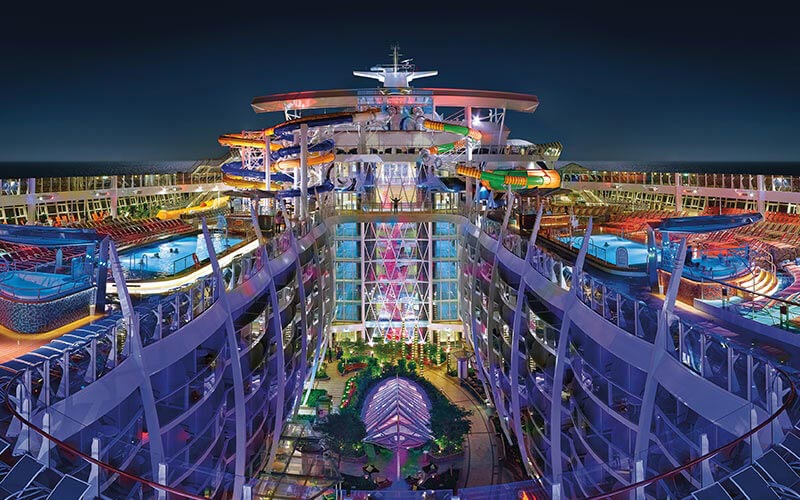 Captain Rob Hempstead says the Symphony of the Seas is 25 per cent more efficient than the Oasis class, and Michael Bailey, President and CEO of Royal Caribbean International, says: “The use of the word“ ultimate ”is intended, because the reason is why we have developed. Ultimate Family Suite ”for example, is that we were trying to create an enjoyable family residence, the ship is a crazy and fun space, and we love the idea of ​​calling it that name.”
Symphony of the Seas has a lot of things for children and adults alike and teenagers alike, to do water slides, swimming pools, rock climbing walls, laser markers, and puzzle rooms, which also cater to all smart people, and the ship offers a hairspray musical show filled with music, and silent discos , The mega casino, plus a bunch of bars, restaurants, and even a pair of robotic bartenders.

Efficiency of the giant ship at sea

This vessel has an air lubrication system where we have large compressors pushing air bubbles under the hull, lifting the ship along the air bubbles to make it more efficient, and it has more efficient fans and steam generators, where the heat rising from the chimneys is captured in a specific device, where it is converted This steam to steam generators, turbines, which spin and generate electricity and add to the network, all of which adds to the ship 25 percent more efficiency than the first Oasis vessel, and this is important, in addition to being 25 percent more efficient, it’s faster than Little oasis categories.

You must visit Mount Matterhorn