Learn about the Hermitage in St. Petersburg 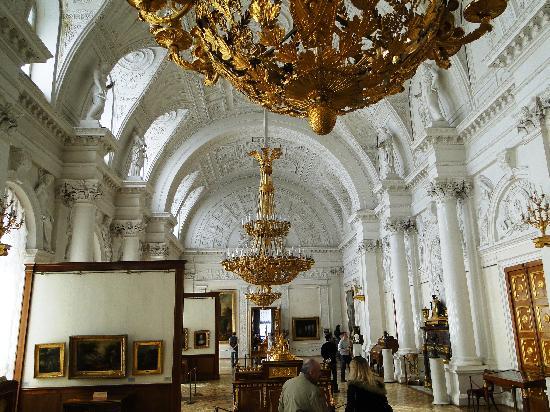 Its name was ancient Leningrad, also known as “Petrograd” is a Russian city located in northwestern Russia in the delta of the Neva River, east of the Gulf of Finland, in the Baltic Sea.

It is considered one of the largest cultural centers of Europe and the second largest Russian city, and the fourth largest city in Europe, and it contains the most important ports of Russia in the Baltic Sea. Tsar Peter I founded it in 1703 as a “window into Europe”, and it was the capital of the country for more than two centuries.
The birth of the Hermitage in St. Petersburg dates back to the second half of the eighteenth century, the era of the prosperity of the Russian Empire during the reign of Catherine II. The Hermitage included in its beginnings a collection of works by Leonardo Da Vinci, Van Ayek, Raphael and others, and it was purchased in Italy. After the Bolshevik Revolution, the imperial Hermitage was declared the property of the Soviet state, combining museum collections, which were scattered around the outskirts of Petersburg, and private collections that had been seized and nationalized, so the museum’s stock was doubled.
Under Stalin’s rule, the government ordered the sale of more than two thousand masterpieces, including some of the most valuable collections and included some of the priceless masterpieces.
In recent years, the Hermitage extended to the buildings adjacent to the General Staff, and launched several ambitious projects abroad. There are international branches of the Hermitage Museum located in Amsterdam, London, Las Vegas and Ferrara, Italy, while the Hermitage Museum in London was permanently closed in November 2007.

Traveling to the Mediterranean pearl island of Sardinia