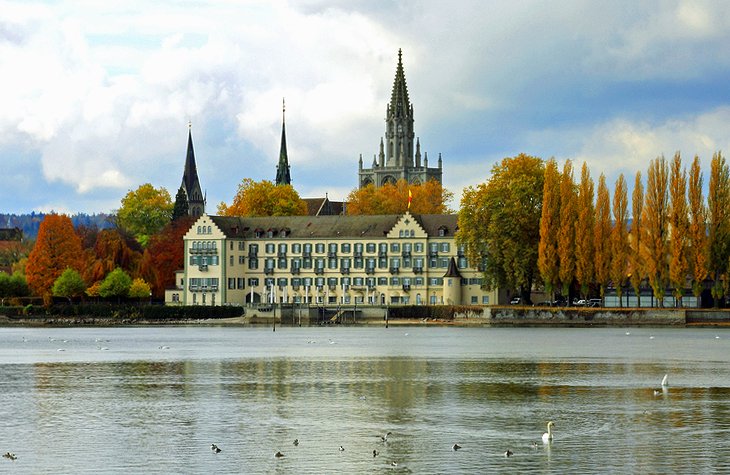 Lake Constance is one of the most famous lakes in the state of Germany and has been known by many names such as Konstanz, in German Bodensee, and the Latin Lacos Brigantinos, and the lake adjacent to Switzerland, and here is some information about it.

It is a lake located under the northern edge of the Alps, it is the largest lake in Germany and bordered by Austria and Switzerland, and contains a lot of wonderful landscapes and includes about 270 km of coastline, and the largest and deepest part of the lake extends from the Gulf of Bregenz to Konstanz and is surrounded by many From the ancient cities on the banks of the lake and attractive villages that enjoy wonderful views of the Swiss Alps, the region is rich in many cultural and historical monuments and contains many ancient castles and villages dating back to the medieval ages and some beautiful gardens that attract the park Yen and nature lover.

Konstanz Minster and the Old Town

The city of Konstanz is close to the Swiss border and is the largest city on Lake Constance. It is characterized by an important cultural center and contains many beautiful old buildings dating back to the eleventh century. Among the most prominent features are the main entrance that dates back to the fifteenth century, and some beautiful interiors which It includes choir stalls dating back to 1460, as well as the 13th-century Resurrection Church, the old town with the 15th-century Hohenzollernhaus Palace, and the Haus zum Rosgarten House which is a medieval sausage house converted to A museum featuring a collection of local and regional artifacts. 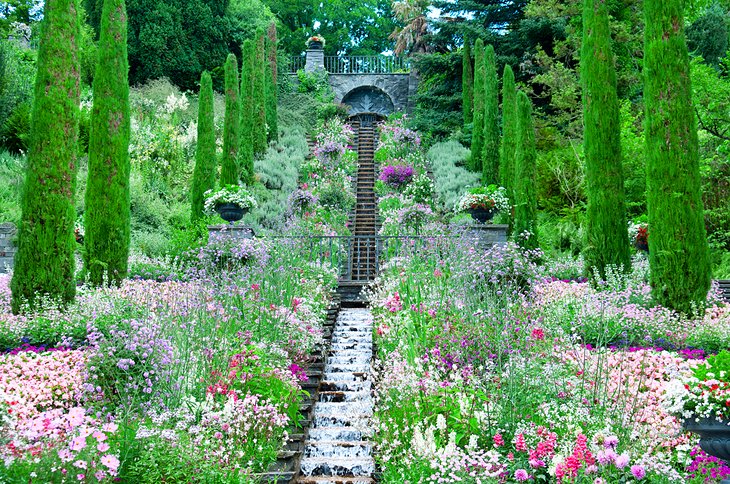 It is one of the most popular tourist attractions around Lake Constance, which is an amazing 110-acre island located just four and a half miles north of Konstanz from the south shore. This site attracts many visitors with its beautiful parks and gardens, and it is distinguished for its containment. On many tropical and sub-tropical plants, the island includes a magnificent palace, the Schloss Palace, which was built in 1746, and the island is accessed by boat or via a pedestrian bridge connected to the mainland. 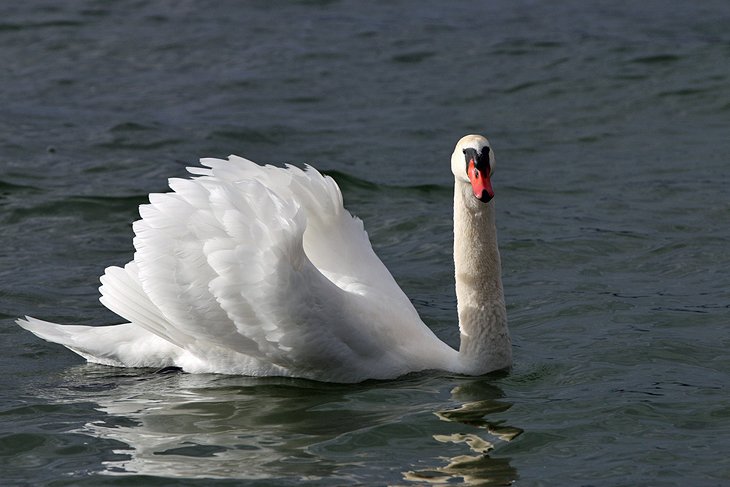 There are many different areas on the shores of Lake Constance near the rivers of the largest tributaries, which are natural reserves and the most important of these and the largest on the German shores of the lake is the Wollmatinger Ried Untersee-Gnadensee where the Rhine River flows from the main lake to Untersee, and the reserve contains a group A wide variety of plants and animals, more than 600 fern and flowering plants, as well as more than 290 species of birds.

It is the largest city on the shores of Lake Constance, located between an island and the slopes of the mainland and linked by the Neue Seebrücke Bridge, and there is an ancient port worth visiting and is characterized by its ancient features is the port of Mangturm, which dates back to the thirteenth century, and the most famous landmarks of the Bavarian Lion, which is six meters high, The new lighthouse is 33 meters high and dates back to 1856.
The old town contains many Gothic houses and houses dating back to the Renaissance and Baroque. Highlights include the Old Town Hall that was built in 1436 with its colorful façade and St. Peter’s Church which was founded in the late tenth century. 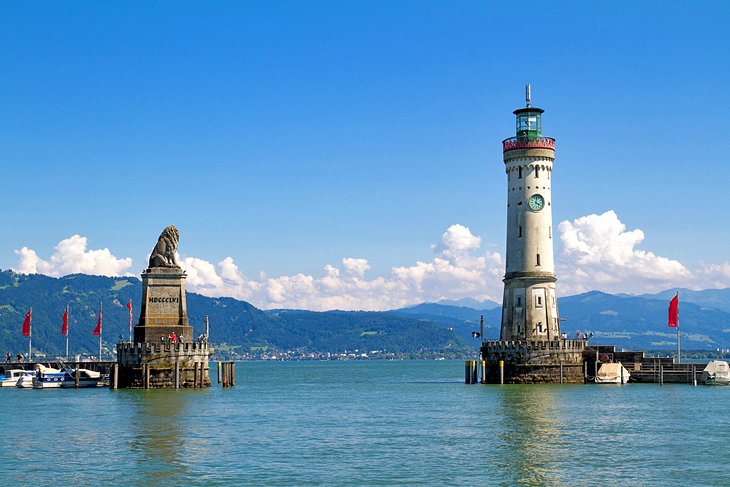 It is located in the southern part of the state of Bavaria Swabia between Lake Constance and the Lech Valley and extends northwest to Wurtemberg, which is a beautiful area for an exploratory walk, part of the northern Kalki Mountains, and contains many amazing landscapes such as sloping hills, wonderful lakes, Quiet pools, vast forests, and lush mountain meadows. 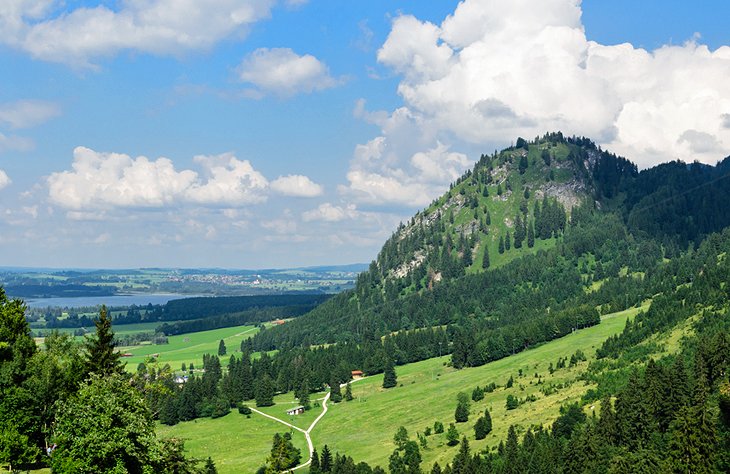 One of the most prominent things to visit in the city of Konstanz is the port dating back to 1388, an ancient warehouse built specifically for trade with Italy known as Konzilsgebäude, and the entrance is characterized by a magnificent statue called Imperia, which is a stunning nine-meter statue built in 1993.

This path is well used for pedestrians and cyclists and surrounds the entire lake at varying distances from beaches. It contains many monuments, nature reserves, small villages, Lindau and Konstanz historic cities, and the Reichenau and Mainau islands. 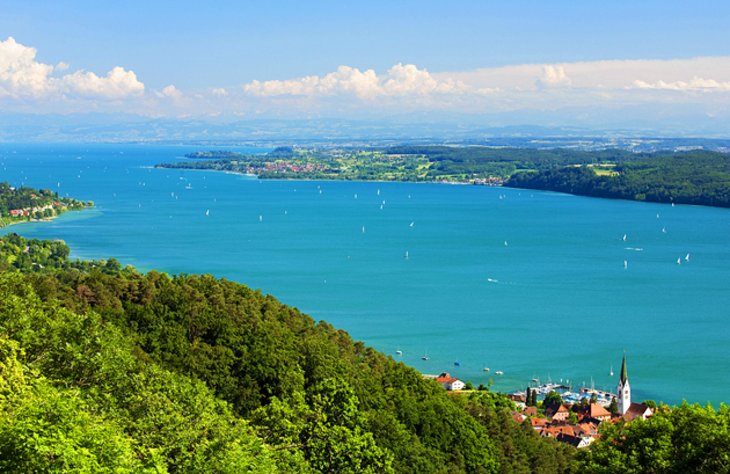 Lake Constance can easily be explored by boat, which is a means of transportation that provides many wonderful landscapes without the need for a car, and tourist boat services are available on Lake Constance from mid-April to mid-October, and there are also local passenger ferries between Allensbach Station, Reichenau Island and across the River Rhine In Konstanz during the summer, many excursions of all kinds are offered for full or half day trips and breakfast or lunch is served.

I advise you to visit the city of the seven hills

The best shopping destinations in Bangsar