Brunei has a lot of beautiful natural places such as rainforests, national parks, mosques with fine architecture and museums rich in distinctive local monuments, and tourists can enjoy golden sunshine and fine sand throughout the year. Among the most beautiful sights in Brunei: 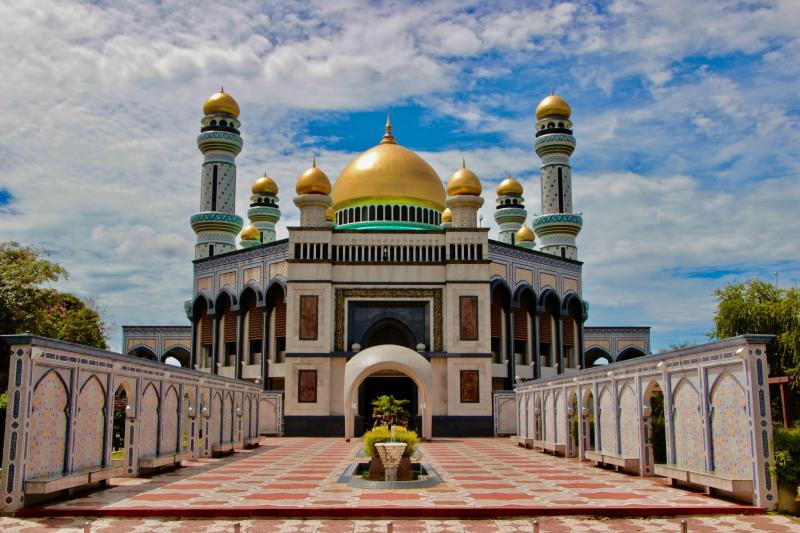 Sultan Omar Ali Safi Al-Din Mosque
Built in 1958 in the center of the capital, Bandar Seri Begawan and bears the name of the twenty-eighth Sultan (the father of the current sultan) and consists of 28 domes as a symbol of the Sultan, surrounded by an artificial lake that reflects the charm of the beautiful and luxurious building whose walls and floors covered the finest luxury Italian marble, while the chandeliers were imported Crystal from England and the transfer of luxury carpets from Saudi Arabia. The main dome of the mosque covers 3.5 million pieces of stained glass and real gold leaf that make up a stunning breathtaking plaque. And the height of the minaret is about 52 meters, which makes the mosque the tallest building in the capital, and there is in the lake the stone boat where celebrations and competitions to recite the Qur’an are held, which is a replica of Mahlejay (Royal Barge) in the sixteenth century.
Known as the Dar es Salaam, this small Muslim country is located on the northern coast of Borneo Island in southeast Asia on the shores of the China Sea as it connects the Indian and Pacific Oceans. The country has its own history, from European influence to British intervention, to the discovery of oil that made it a rich industrial country. 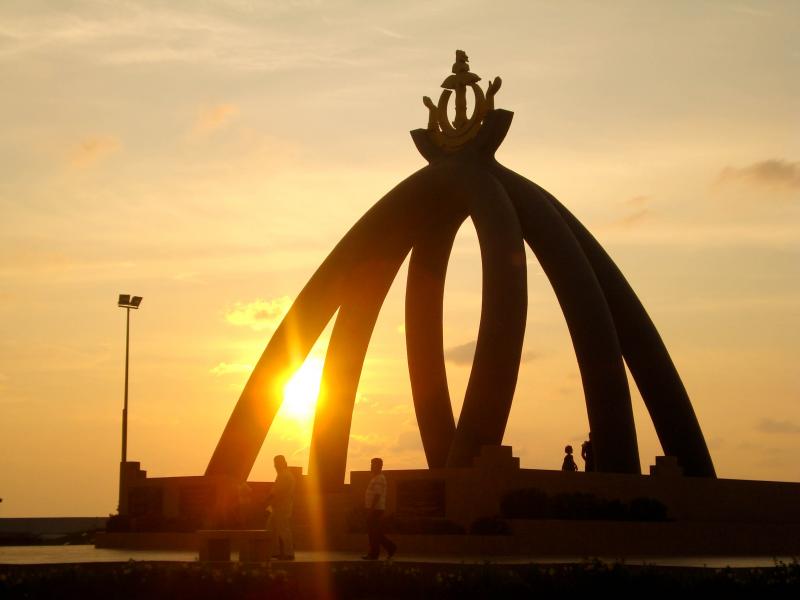 Oil Discovery Center
The center presents the latest findings of engineering sciences and the oil and petroleum industries, and the center aims to teach visitors to understand and appreciate the oil and gas industry on which the Brunei economy is focused. 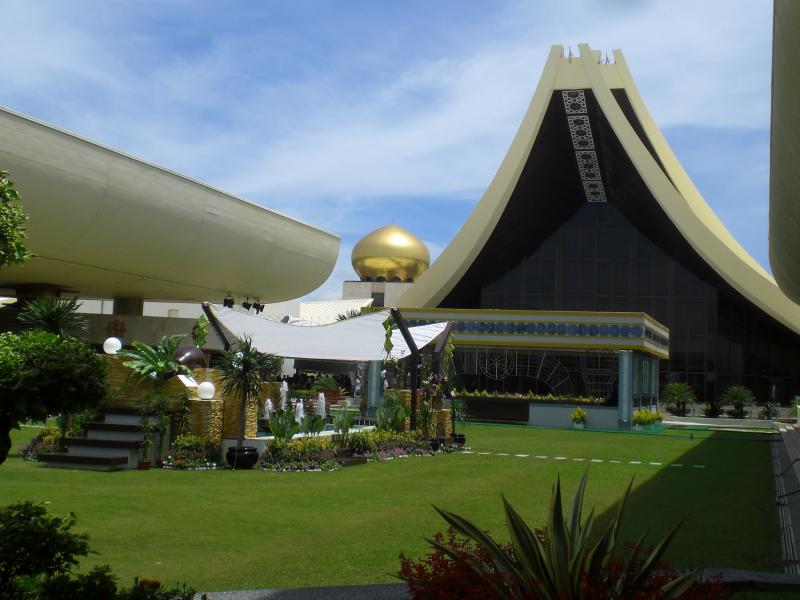 Sultan’s Palace
The Sultan Palace is famous in the name of Istana Nur Al Iman, which is the official residence of the Sultan. It was built in 1984 at a cost of one billion and 400 million dollars. It is also the largest residential palace in the world as it contains 1788 luxurious rooms, and the dining hall accommodates more than 5 thousand guests, a mosque It accommodates 1500 people in addition to leisure and service facilities and is open to visitors during the Harry Raya season in Brunei. 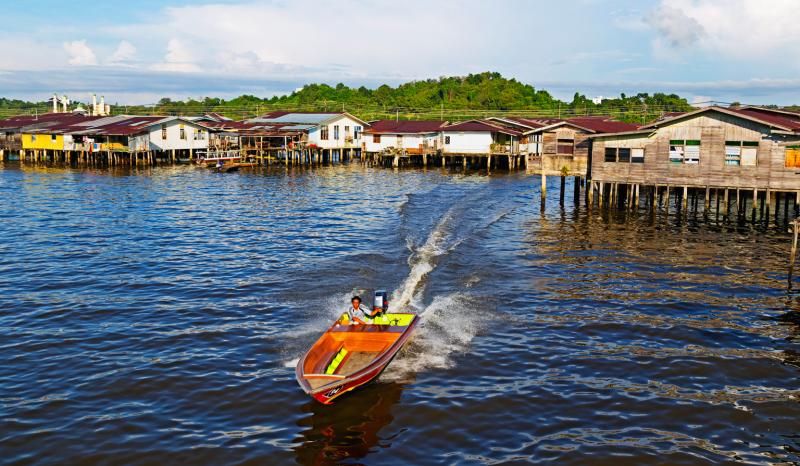 Kampong Air cultural and tourism exhibition
This beautiful exhibition, which opened in 2009, focuses on the history, local lifestyle and crafts that the country’s inhabitants have mastered. It is located on the eastern edge of the river, and the flat and glass exhibition tower offers stunning panoramic views of the city.
Kampung Air (Heritage Water Village)
Kampung Air has more than 30,000 people and consists of 42 adjacent villages along the banks of the Brunei foal steeped in the country’s cultural and historical heritage, built on stilts over the river and many indigenous people prefer to live in. It contains mosques, private schools and police stations and can be moved by taxi boats and wooden walkways. It was founded at least a thousand years before Christ, and is considered the largest water settlement in the world, and it was named by researcher Antonio Pegavita during his visit to it in 1521 as the “Venice of the East” where the wooden houses glistened under the sun in bright and bright colors.
Oulu Timborong National Park
One of the most prominent tourist places in Promai, and it extends over an area of ​​500 square meters in the heart of the rainforest of a picturesque and rare nature, which makes it a kiss for scientists and environmentalists. This park comes to life since its founding in 1991 and contains more than 400 types of beautiful butterflies while the rest of the birds and animals are active during sunrise and sunset periods, visitors can enjoy many interesting adventures and climbing steel towers that penetrate the green mountainous hills in the garden. 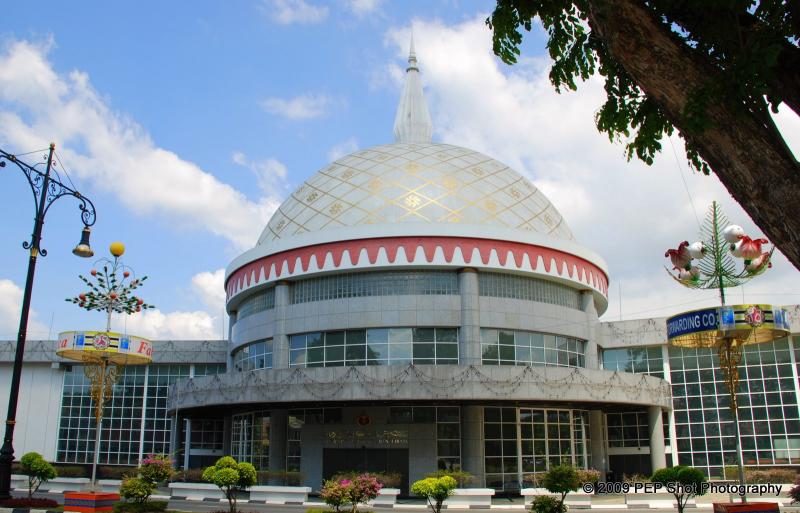 The royal building in Bandar Seri Begawan
This prestigious museum contains the objects and possessions of the Sultan, including gifts that were provided to him by the presidents and kings of other countries, in addition to the sultan’s crown, his full clothing and his cart, along with a large collection of precious treasures. A series of images shown provides a glimpse into the Sultan’s private life. In addition, the Sultan’s motorcade, which he rode in the silver jubilee celebrations in 1992, will be displayed in the museum alongside army vehicles and traditional clothes that were worn on that day. The museum will display the car that was used to crown the Sultan in 1968.

Hassan Al-Balqia Mosque
It is the largest mosque in the country, and was built in 1992 to celebrate the silver jubilee of the era of the current Sultan. It is characterized by four minarets surrounding twenty-nine golden dome and is a symbol of the current twenty-ninth Sultan. The mosque shines at night when illuminated as a golden flame. The grandeur of the mosque is no less than the interior from the outside, as there are countless luxurious carpets in the prayer hall, and there is an entrance and elevator for the Sultan. 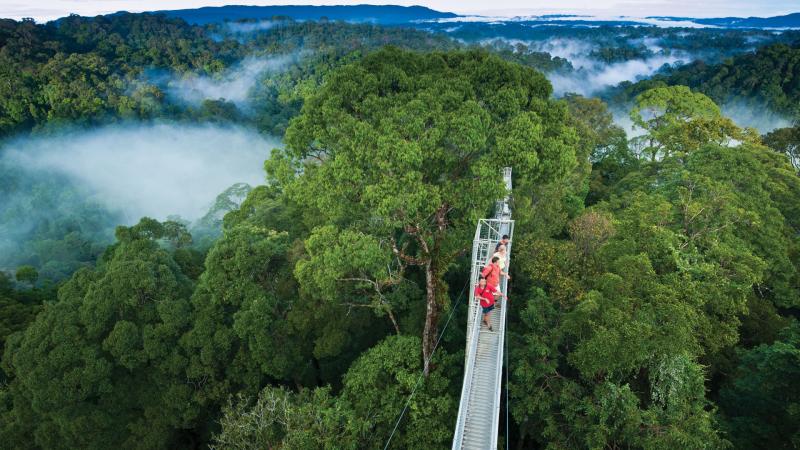 Brunei Darussalam Maritime Museum
This upscale museum takes the shape of a ship and was opened in 2015 in Kato Pato, about 5 km from the city center, and includes more than 13 thousand artifacts discovered by a group of divers in the wreck of a ship in 1997, which was believed to have been sailing from China in the late century Fifteenth before sinking, and these relics include colorful ceramic and glass exhibits from China, Vietnam and Thailand. Close to this museum is the Malaysian Technology Museum, which displays methods and methods of boat making, metal smelting and goldsmithing in ancient times.
Pulau Selerong Theme Park
This stunning natural park is located 25 square kilometers from the capital at the northern end of the Timborong region. The park is covered with a dense cover of mangroves where visitors can take trips across the river and wander in the woods to see strange monkeys with long brown noses known as Khartoum monkeys along with animals A rare flying lemur living in the garden, also known as the Mosquito Island.

For those who want luxury and quiet, visit Vancouver Island, Canada

All you need to know about Havana Cuba