Tourism in Lübeck, Germany .. and the 9 most beautiful tourist places

Lübeck has a long history in Germany. In the past, it was the most important city of the Hanseatic League, nicknamed the Queen of the Hans. It was and still is an important port, so Emperor Charles IV compared it to cities such as Pisa, Florence, Rome and Venice, which were known proud of Europe. Lübeck now has many historical and archaeological monuments that reflect what lived in this ancient city, and can be explored on foot.

Bergtor is one of the most important tourist attractions in Lübeck. It is the northern gate of the city, founded in 1444 and one of the two; two out of four gates built around the medieval city. It obtained its name from the founding castle at the River Trave, and contains a number of buildings that were built on and around it. Among them, the Romanesque-style tower is one of the most popular tourist attractions in Lübeck. 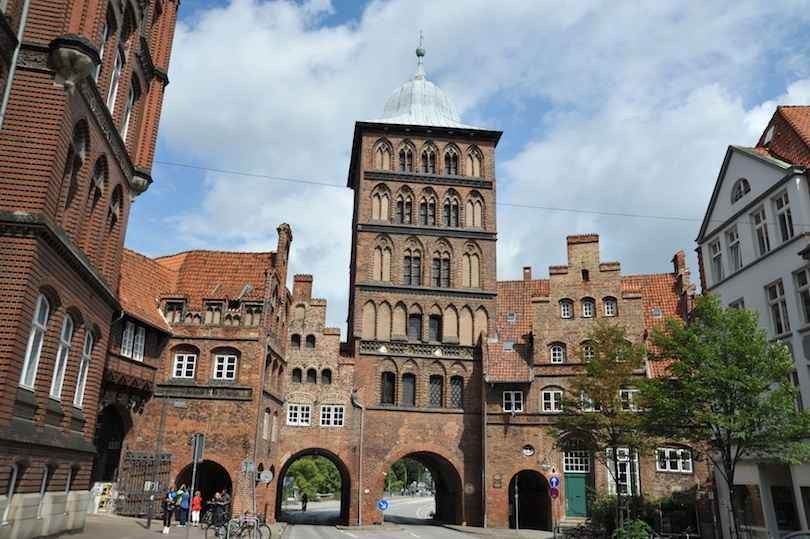 Passat is one of the most beautiful tourist destinations in Lübeck that has a breathtaking panoramic view, and is a long sailing ship founded in 1911 in Hamburg, and sailed between South America and Europe. Although it is no longer used to transport cargo around the world’s seas, it receives a huge number of Visitors every year. Due to this, it has been well restored and contains a youth museum and hotel. 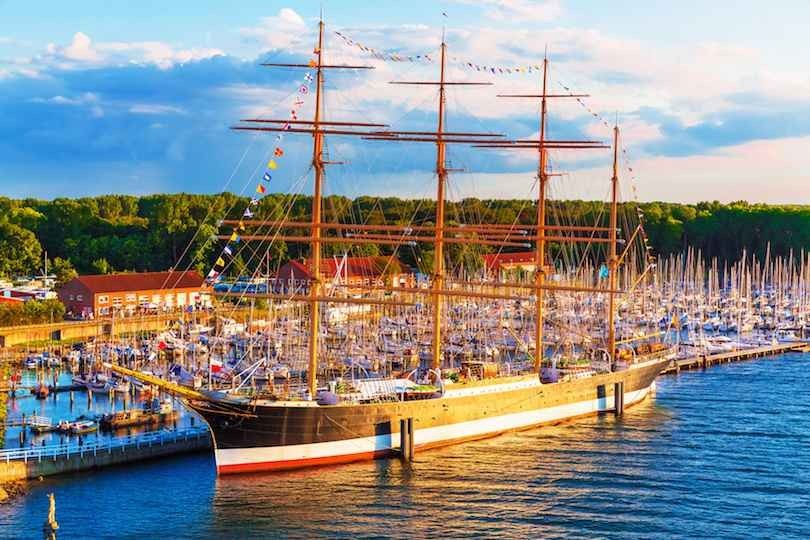 Badenbrooks is a small museum located on Route Four, founded in 1758 and it was the birthplace of two important German writers: Thomas and Heinrich Mann. It is accessible via the Church of the Virgin Mary, and is one of the tourist attractions in Lübeck intended for fans of history and literature. The house was completely destroyed during World War II, and only the façade of the building remains. Its foundation is no longer the same as before, but its facade remains the same, and the successor of the Museum is located in honor of Thomas Mann. 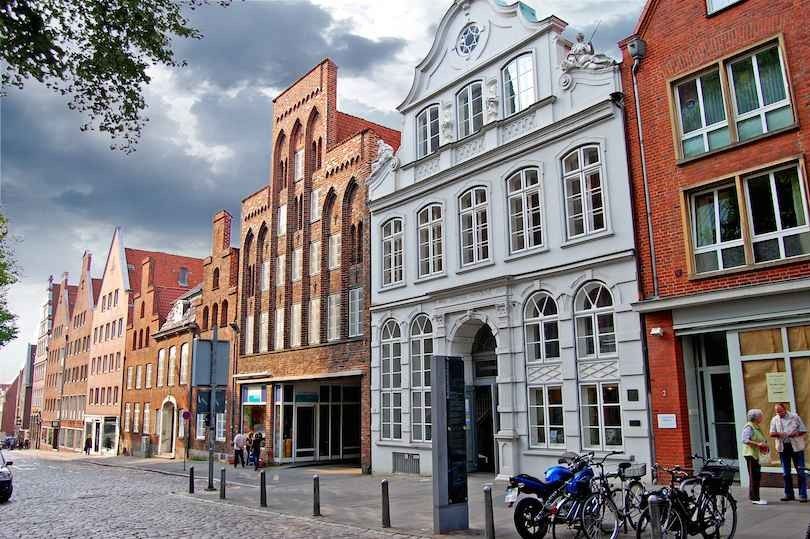 One of the most important places of tourism in Lübeck dates back to the twelfth century where; Henry the Lion ordered the establishment of a Romanesque-style building for the city’s Bishoy. The church was partially destroyed during World War II, and the altar and a number of priceless pieces were lost. The monumental cross of the cathedral has been preserved, and a number of medieval artworks that you can see today. The Lübeck cathedral was restored in 1982 where; an elevator was added to transport visitors to the famous church bell tower. 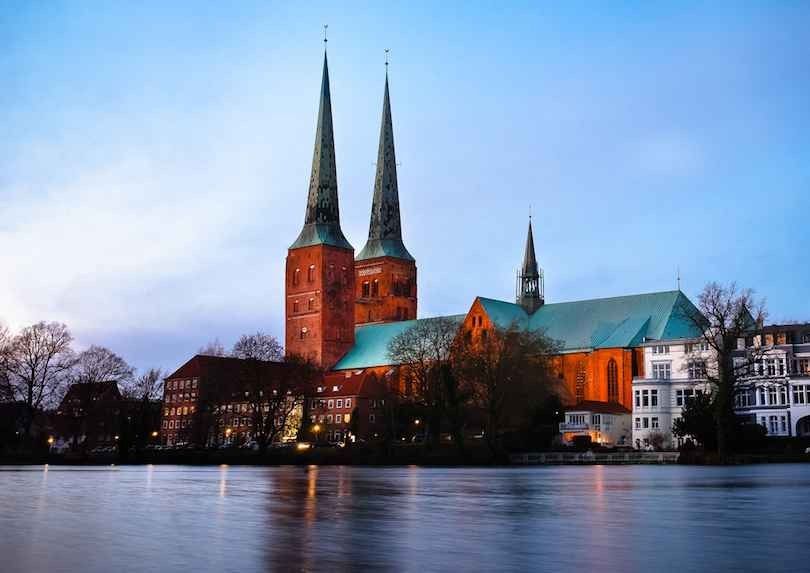 Lubecker Rathaus is located among the best tourist places in Lubeck due to its being one of the most important and wonderful city halls in Germany. It has a glamorous view at night when it is lit. It started construction in 1230 when three houses were built on the market place, and it expanded over the years to become a huge architectural monument held by the Hans meeting.
You can see the interior of the hall through the daily tours, and the most striking are the doors of the courtrooms of different lengths. The innocent come out of the high doors, while the criminals come out of the short doors. This makes it an interesting destination to visit when traveling to Lubeck. 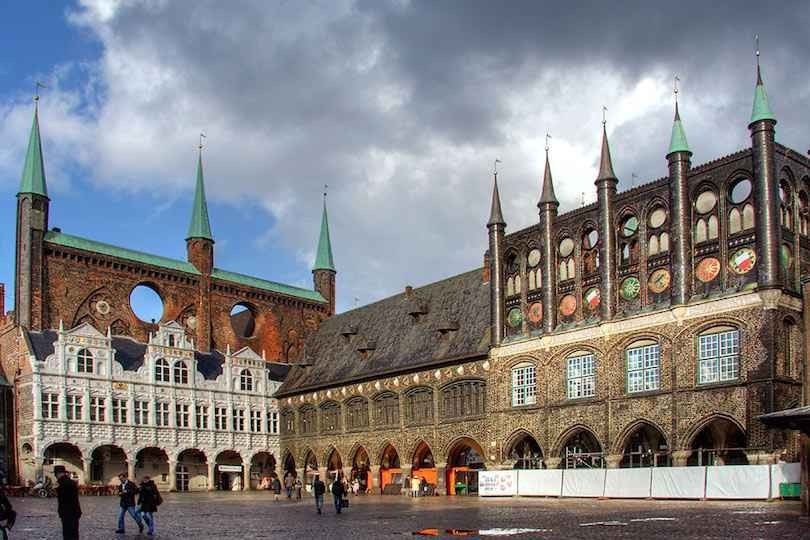 Another destination in Lubeck that has distinctive architecture and ancient history, the exterior of the building does not resemble a hospital form so much; it contains pointed ceilings and towers that pierce the sky. The Holy Spirit Hospital has cared for the sick and the elderly since the thirteenth century, and part of it is still used as a hospital to this day. As for the stay, visitors can walk around it, and it includes a small church, and a number of charming murals. It is a destination that should not be missed when traveling to Lübeck for everyone, and every year the Christmas Market is held so that shoppers can see the dormitories that the elderly lived in. It takes place in November Also an exhibition of works and crafts by a number of indigenous people.

Marincks, or what is known as the Church of the Virgin Mary, is one of the best tourist attractions in Lübeck, where it invades the city sky with its tall towers, which reach a height of one hundred and twenty meters. Founded seven hundred years ago, and has a Gothic design that reflects the shape of the predominant brick on its appearance, it was like for many The churches in the Baltic region are classified as one of the most important tourist places in Lubeck because of their great importance as they contain the longest blue dome in the world. It also includes a number of important graphics and artifacts that you can see. 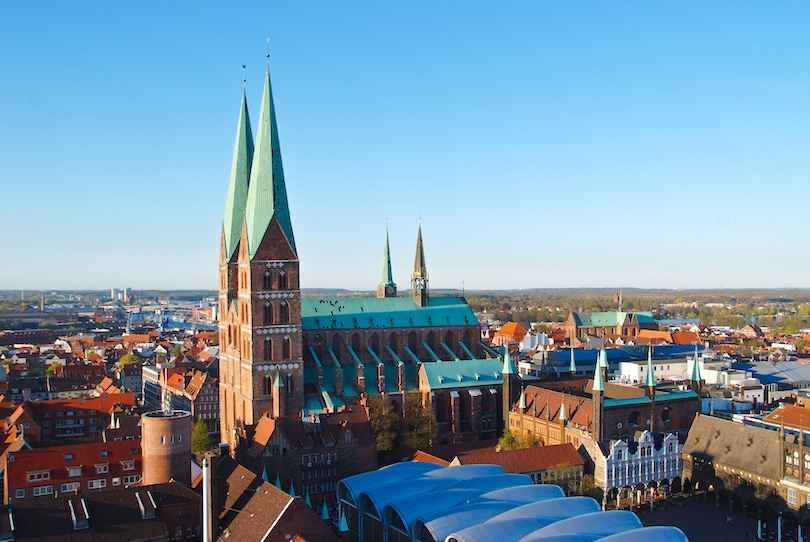 St. Petri Church is one of the best tourist spots in Lübeck with which you can admire breathtaking views of the city. Founded in the twelfth century, and severely damaged during World War II, its restoration is still underway, especially for its interior, the elevator that transports church visitors to the top; one of the efforts of this restoration, and enables visitors to the place to enjoy a full view of the city, in particular a sunset scene The sun, who influences those who see it with its beauty. 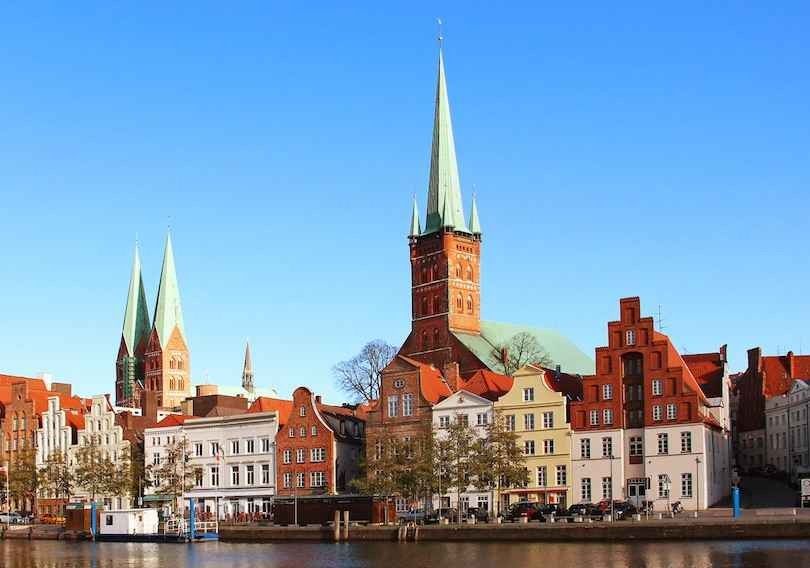 One of the city’s two remaining gates, making it one of the most important tourist places in Lubeck. It was established between 1464 and 1478 and is considered the symbol of the city due to its unparalleled twin towers. Rather than destroying it, a decision was made to restore it due to its poor condition where you were diving down every while. Today there is a museum in it; it shows its history and the history of Lübeck during the Middle Ages. 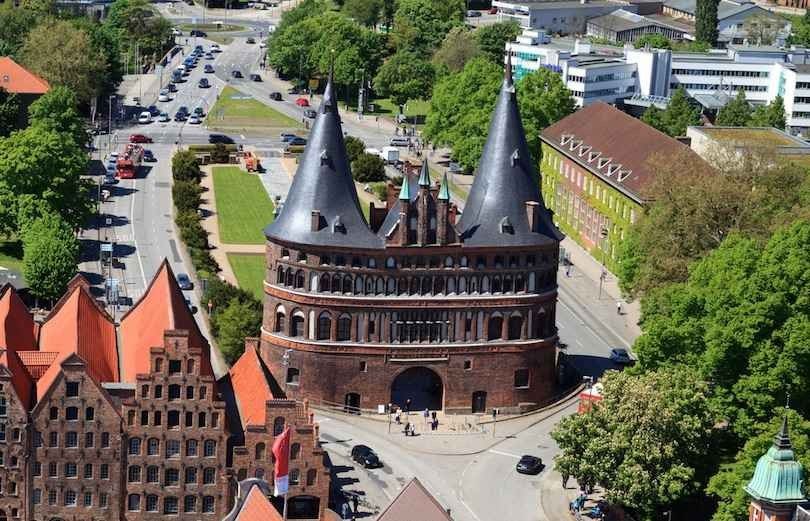 The Indian city of Gua