Tourism on Yas Island Abu Dhabi .. and places of entertainment and tourism

Places of entertainment and tourism on Yas Island 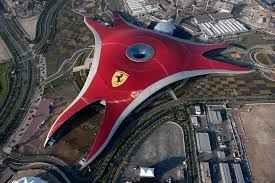 Ferrari World Ferrari World is the largest gaming city on Yas Island in particular, and the whole world in general, and Ferrari gaming city was opened on November 4, 2010, and one of the games that exists in the Ferrari world: Formula Rossa is one of the very fast rollercoaster games, if not faster Games at all, with a speed of more than 240 kilometers per hour. The game Verano GT is one of the dangerous challenges for rollercoaster vehicles. The game v12 is one of the famous games in the Ferrari world, it is one of the games that exist within the Ferrari 599 engine, as this game is a game Watercraft for rollercoaster vehicles Anilo is one of the famous games in Ferrari where one of the specialists takes visitors to his tour of the famous Ferrari factory, and the specialist gives a simple overview of the Ferrari GT design, as well as the Ferrari GT test. Scuderia game, which is one of the challenges in which the visitor car racing With another group of Ferrari cars inside a virtual circuit. Bit Wall is a theatrical performance, through which it will get to know the team of the Scuderia game, and this is done during their preparations for the race process, which excites the visitor and stimulates him to watch the race. G. Force is one of the most dangerous games in the world The famous Ferrari where this goes up The game is to more than 60 meters outside the building at a very fast speed. The training camp is a region in Ferrari World specially designed for young children, as the games in this area are dedicated in complete safety for fear of children, and children work on car racing remotely through the remote control, or Working on the race by the child himself through cars and vehicles equipped with foam material is completely safe, designed for the child specially. The magic of speed from the crazy and fictional games of the great Ferrari world, where the visitor is taken to an imaginary journey to see plants and different landscapes from all the world’s environments B A four-dimensional vision, in order for the trip to be more credible and realistic. Driving with heroes is a presentation in which the three-dimensional vision is achieved, and this presentation is a story and a dream presented by an engineer driving with one of the famous Ferrari races. The Young Leadership GT Junior is considered the first part of the Driving Learning School. The Grand Prix for Youngsters This race is the second part of the driving school, in which motor racing is conducted between the beginners to motivate and encourage them in the process of learning to drive. The racing giants is a presentation made inside World Ferrari in which clips are shown for professionals in important Ferrari races. Maranello cinema This cinema is a large exhibition hall in which films are shown since ancient times dating back to the 1920’s. Magic of Italy is a small tour made inside a miniature version of Italy by Ferrari mini cars. Paddock is a small piece that includes the process of transferring Ferrari’s maintenance and training team inside Ferrari to Europe for Formula One. The Heroes Carousel is a set of experimental designs through which visitors choose the designs of Ferrari vehicles and work to ride and evaluate them. Galleria Ferrari is a phrase About the largest Ferrari exhibition in the whole world and this exhibition is located outside Maranello. Read also: Cheap markets in Abu Dhabi. After getting to know the Ferrari World Games City, which is one of the most important tourist attractions on Yas Island, let us now turn to the water world of Yas.

Second, the water world of Yas 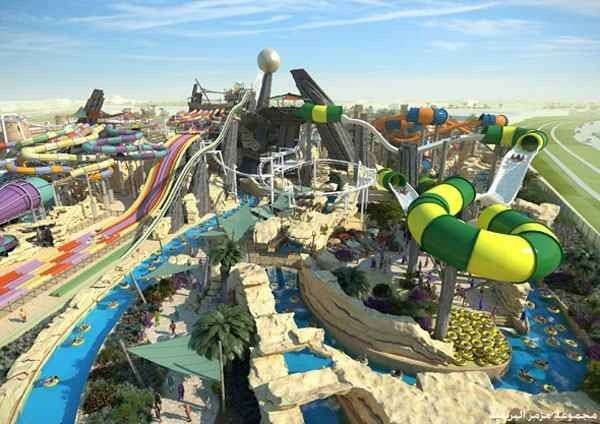 Yas Water World Yas Water World is one of the fun and entertaining places inside the famous Yas Island. It was opened in 2013 on January 24, and it contains 43 games. Among the most famous of these games are:

It is the first water snake slider that is made all over the world, as it consists of a group of water slides as well as tunnels, through which the visitor can obtain real pleasure, excitement and excitement, so it is recommended for people who love adventure, where visitors enter these slides and tunnels This game provides the visitor with about thirty different adventures while walking in the sliders, as these sliders were equipped with exciting sound and light effects, in addition to the presence of smoke and the presentation of some short videos that are characterized by three-dimensional vision, at the end of each slider and before entering the house The new s visitor faces a giant snake head imaginative, which attracts more adventure, and therefore it was called snakes slides. Read also: Abu Dhabi’s tourist spots

It is a very attractive and interesting game for all those who love adventure they should not hesitate to try this game, as it is based on: The visitor searches for a treasure in the middle of the water and is met by many marine neighborhoods and coral reefs, as well as they are exposed to more than 70 puzzles they solve All to reach the treasure by interacting with the legendary and marine giant creatures, and these games are the most beautiful tourist attractions in Yas Island, do not hesitate to visit the great Yas Island to enjoy all the Ferrari games as well as water games.

Tourism on the island of Reunion, France … the most beautiful tourist places and beaches

What is the capital of the state of Hungary