Where is Albania located and how to travel to Albania

Albania is one of the most important tourism destinations in Europe, as it is one of the cheapest tourism areas in it and enjoys a picturesque nature and a wonderful climate.
Tourist attractions are spread all over Albania, there are beaches, museums and mosques that reflect the splendor of Ottoman architecture, and it is worth mentioning that Albania is one of the smallest countries in Europe so it is possible to travel to all areas of tourism in one trip.
In the following report, we answer the most important questions related to tourism in Albania, we will get to know you and where Albania is located and where the city of Tirana is its capital, and how to travel to it and the distances between the most important tourist cities in it. 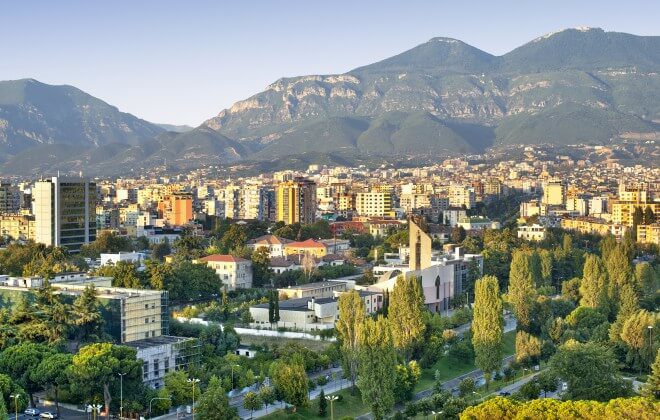 Where is Albania located on the map:

Albania where is it located? Albania is located on the southern side of the Balkan Peninsula, south of Europe, and overlooks the Strait of Otranto, which connects the Adriatic and the Ionian Sea, and is bordered by several countries, including Greece and Montenegro.
The following map shows the location of Albania on the maps provided by Google:

How to travel to Albania:

You can apply for a visa to travel to Albania, whether for tourism or work through the embassy or consulate of Albania in your country. It takes a maximum of 15-20 days to obtain a tourist visa to enter Albania.
The inhabitants of most of the countries of the world can enter Albanian lands without the need for a visa, but only on the condition that the traveler holds a valid Schengen visa and has previously traveled there, or he has a US or British visa, but he has also traveled there.

Distances between cities in Albania:

After we got together where Albania is located, we show below the distances between the famous Albanian cities, especially the capital Tirana and other cities, how to travel between them and the time spent traveling.

Distance between Tirana and Doris:

The distance between the Albanian capital Tirana and the tourist city of Doris is about 36 kilometers, according to Google Maps, and that distance can be traveled in half an hour by car, or by bus in an hour but a quarter at a cost ranging between 60 and 85 dollars.

How far is Berat from Tirana?

The distance between Tirana and Berat is about 123 km, and it is possible to travel in two hours except a third by car. It is also possible to travel to the city of Fier in three and a half hours by bus, at a cost of no more than $ 85, and then rent a car and head to Berat.

Distance between Doris and Berat:

The length of the road between the two cities reaches 90 kilometers, which is approximately an hour and a third by car, or five or three hours by train to Fier and one hour to Berat by car.

The distance between Tirana and Sarande Albania:

The length of the route between the two destinations is 276 km, and can be covered in 4 hours by car or 5 hours by bus.

We hope that the article has answered you a question where is Albania located in Europe and the most important cities in it.

The 7 best beaches in Egypt that are worth a visit