Where is located and the most important cities near Cannes

It was one of the most famous tourist destinations in France and the world between the rich and aristocratic classes and the famous artists or fans of TV and cinematic arts and followers of its latest global events thanks to the annual festivals it organizes to keep up with everything new in these fields, in addition to its distinguished archaeological streets and attractive historical palaces Luxurious.
If tourism in Cannes is your goal and your follow-up to the events of a festival such as Cannes International Film Festival is your biggest dream, then it definitely begins from this article that explains to you where it was located and how you move from or to it from the most important tourist cities of France to have an unforgettable trip.

Cannes includes a group of the finest and best hotels in France in terms of services and facilities, the location is one of the most important tourist attractions in Cannes, offers are appropriate prices for different budgets, and by visiting the following link, you have got to know the best hotels that were recommended by Arab visitors .. Read more 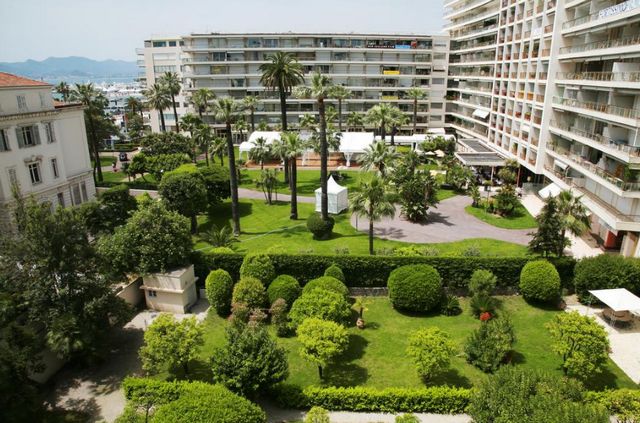 Where was it located?

Cannes is a French city famous for being the residence and tourist hosts of celebrities, the wealthy, and the high-class social classes.
To find out more about the location of Cannes in the French territories and between its most important and largest cities, you should see the following map:

Where is it located among the most important French cities?

Cannes is surrounded by a group of the most important tourist destinations in France, such as the capital Paris, Nice, Marseille, Lyon, and other cities, and during the following paragraphs we review the distances and access routes between the center of Cannes and its sisters from the French tourist cities.

Where was it from Paris?

Cannes is 905 km from Paris, the equivalent of 8 hours and 54 minutes of driving across the A6 and A7 tracks.
The distance can be calculated within a maximum of an hour 25 minutes by pilots Paris, France – Nice, France daily non-stop flights.

The distance between Nice and Cannes

Nice is 33.1 km away, equivalent to a 35-minute drive on the A8
The distance between the two cities can be covered by public buses within 26 minutes to 39 minutes.

The distance between Cannes and Strasbourg

Strasbourg is 935 km away from the equivalent of an 8-hour drive and 28 minutes across the A7 track, or a 818 km drive equivalent to an 8-hour drive 23 minutes via the A2.
The shortest route between the two cities is by Strasbourg, France – Nice, France daily pilots, with the journey taking a maximum of one hour and 15 minutes.

How far is Marseille from Cannes?

Marseille is 174 km from the equivalent of 1 hour and 52 minutes’ drive across the A8 track.
Or 191 km across tracks A7, A8, A57, which is equivalent to driving for two hours and 4 minutes.
The distance between the two cities can be covered by public buses within a maximum of two hours and 6 minutes.

The distance between Annecy and Cannes

Cannes is 556 km away from the equivalent of 5 hours of driving across tracks A7 and A8, or 464 km equivalent to driving 5 hours and 18 minutes across track A8 alone.
Or limit your travel time to one hour through a flight on Geneva Airlines, Switzerland – Nice, France Air which provides 3 to 5 daily flights non-stop.

Where did he fall from Chamonix?

Cannes is 497 km from Chamonix, equivalent to 5 hours and 31 minutes’ drive via tracks E25, E80 / A10.
Or 438 km, equivalent to driving for 5 hours and 53 minutes on A25.
Or limit the distance to just an hour with a flight on Geneva Airlines, Switzerland – Nice, France Air which provides 5 non-stop flights daily.

How far is Lyon from Cannes?

Lyon is 447 km from Cannes, which is equivalent to driving 4 hours and 5 minutes via tracks A7 and A8
The shortest way to get between the two cities is by flying a maximum of 55 minutes on Lyon, France – Nice, France daily.

How far was it from Colmar?

Cannes is 746 km from Colmar, equivalent to 7 hours and 48 minutes of driving across the A7 track alone.
Or, they quit a plane within a maximum period of 15 hours on the Basel, Switzerland-Nice, France daily.

The distance between Macon and Cannes

How far is Dijon from Cannes?

Dijon is 637 km away, equivalent to 5 hours and 50 minutes’ drive via A7.
Or travel for an hour 25 minutes via a flight on Paris Airlines, France – Nice, France Daily.

The distance between Cannes and Montpellier

Montpellier is located 301 times the equivalent of 3 hours and 2 minutes driving via tracks A8.

How far is Neem from Cannes?

Where is Valence located?

Cannes is 347 km away from Valans equivalent to driving 3 hours and 10 minutes via tracks A7 and A8.

The city of Cannes has a number of the most important historical and archaeological monuments that attract the attention of tourists from all parts of the world, you can get to know it by visiting the following link .. Read more