Where is Uzbekistan located and what are the distances between Uzbek cities?

The country of Uzbekistan is distinguished by its special tourist character, as it is a mix between the simple nature, ancient history and diverse cultures, and it is the mother country of many famous scientific and Islamic personalities such as Al-Khawazmi, Ibn Sina and Imam Al-Bukhari.
Uzbekistan is a distinctive tourist destination for many Arab tourists, as they are very welcome by the local people, as they love the Arabic language and are keen to learn it strongly, especially with regard to Sharia sciences.
In this short report, we answer our distinguished visitors on the most important questions about tourism in Uzbekistan, such as where is Uzbekistan located, how it can travel to, and what are the most important tourism cities famous for it. 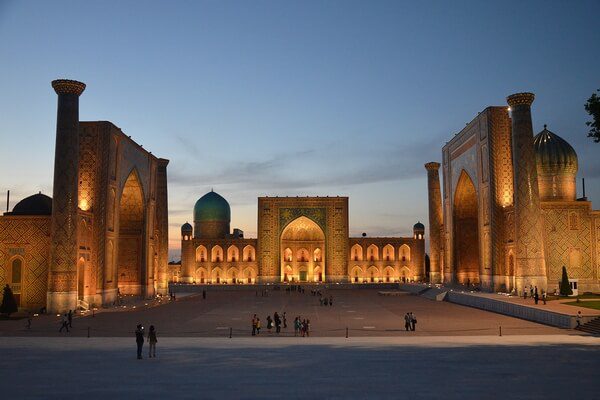 Where is Uzbekistan located on the map:


How to travel to Uzbekistan:


The most important tourism cities in Uzbekistan:

Uzbekistan includes many tourist cities, which are Tashkent and Samarkand the most famous among them, and there are some other cities that we have presented below.

Tashkent is the first tourist destination in Uzbekistan, as it is characterized by the beautiful nature and green gardens scattered throughout, in addition to it includes many buildings and monuments dating back to the Middle Ages.

The second largest city, after the capital, is a mixture of many cultures such as Arabic, Indian and Western. It is listed on the UNESCO World Heritage List for its unique monuments such as the Mosque of Rajasthan and the Delksha Palace dating back to the Timurid era.

It is the birthplace of Imam Al-Bukhari and the great Sheikh Ibn Sina, so it is famous for being a center for spreading the teachings of Islamic religion, culture and science, and it houses many antique schools and mosques such as the famous Kalyan Islamic Complex.

Formerly called Khwarazm, it is characterized by the majestic monuments of Islamic architecture and includes the highest historic minaret in Central Asia and is the minaret of the Qalluq of Timur, which is 60 meters long.


Distances between cities of Uzbekistan:

Here are the distances between the most popular cities in Uzbekistan and the time taken by car to travel from one city to another.


The distance between Samarkand and Bukhara:


Distance between Tashkent and Samarkand:


Distance between Tashkent and Bukhara:

Bukhara is about 575 km from Tashkent, which is approximately an 8-hour drive, on the road shown on the map below. It is also possible to travel by plane between the two destinations.


The distance between Khiva and Samarkand:

The distance is about 704 km, and it can be covered by car in 10 hours except a quarter.


The distance between Khiva and Bukhara:

The shortest land distance between Khiva and Bukhara is 458 km, which is approximately a six-hour and ten-minute drive. It can travel by train and plane.


Also read: The 4 best tourist cities in Uzbekistan are recommended