Martinique Island is one of the Lesser Antilles, which has an area of ​​about 1128 square kilometers. The island is located in the eastern Caribbean Sea with the borders of the Atlantic Ocean to the east. 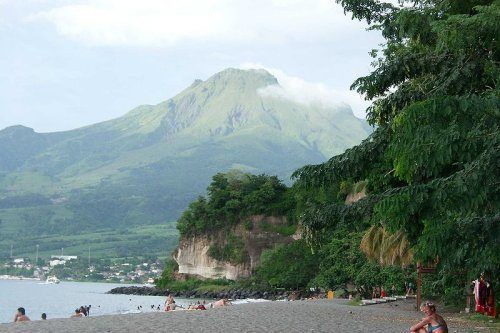 Geography
Martinique Island belongs to North America (to be exact in Central America). Its closest neighbor is Dominica Island, which is 41 km to the north and St. Lucia Island, 32 km to the south. 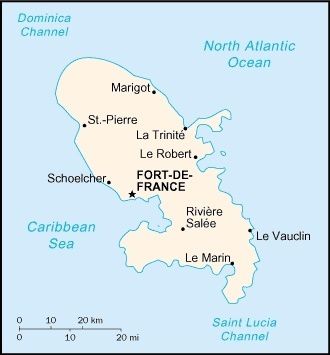 Martinique’s capital is located at 14 ° 36 ‘north and 61 ° 04’ west longitude. The longest distance to the island in the northwest – in a southeastern direction about 63 km. In the widest range, it can reach 31 km.
the climate
Martinique is affected throughout the year by a hot, humid climate. Island-wide temperatures range from 28 ° C in January to about 31 ° C in September.
The temperature lasts between 20 and 23 degrees Celsius. There are two distinct seasons – dry and rainy. The dry season lasts approximately from December to May. Temperatures reach the minimum precipitation during March (about 60 mm).
The rainy season lasts from June to November. September is the month marked with the most rain (around 200-250 mm). There is a mixture of warming and abundance in sunlight throughout the year, which increases the strength of tourism development.
Nature
Martinique Island is an island of volcanic origin. Most of the island is located between the mountains are not very high. The highest point is the Mont Pellet Volcano, which rises to about 1,397 meters above sea level in North Martinique.
According to the Food and Agriculture Organization, there are approximately 46.2% of the island covered by forest cover. Martinique’s animals have been highly influenced by human activity throughout the ages, in addition to the presence of some wonderful creatures. Martinique is home to hummingbirds – and small colorful birds that fly like butterflies from flower to flower in search of nectar.
The warm, sunny waters of Martinique are home to a wide range of species. The coral reefs that surround the island have a stunning ecosystem, and are home to a large number of exotic and colorful marine creatures.
the coast
Martinique Island is a true Caribbean paradise with stunning beaches. A very initiating coastline with hundreds of small semi-protected bays. Here you will find some of the most beautiful beaches in the Caribbean. Therefore, the shallow coastal waters that surround Martinique are always clear and calm, which provide an incredible view from under the water.
Coconut palm trees stretch along the shores of Martinique, creating a unique feeling of exoticism. Most of the beaches of Paradise are located along the east and south coast of the island, despite the presence of the western and northern coasts that offer some wonderful places for recreation.
Economics
Although located in Central America, Martinique is part of France and is a member of the European Union and the Eurozone. The official currency of the island is the euro.
Every year, more than half a million tourists come to spend their holidays in Martinique. Traditionally, the majority of tourists choose Martinique Island to spend their vacation here in the summer months, in addition to the increasing numbers of tourists in the winter with the increase in prices during that period.
The island is very well developed for the food industries, the most famous of which is the manufacture and export of high quality rum and fish products.
Agriculture occupies a smaller share of the economy in Martinique, which holds about a tenth of the revenue from the island. Here mangoes, papaya, bananas, coconuts, citrus fruits, sugar cane, coffee, cocoa, vanilla and vegetables are grown. The most popular farm animals are birds, pigs, sheep, and cattle.
population
The population of Martinique is more than 400,000 people, with diversity in their ethnic origin. The main part of the population is dark-skinned. Almost 10% of the total population are European (mostly French descendants) or Asians. The official language is French, but most of the locals use the Creole language in their daily lives. The official religion of Martinique is Christian (Catholic).
The largest city on the island is the capital of Fort-de-France. With a population of more than 130,000 people, or about a third of all Martinique’s population.
The best times to visit in Martinique 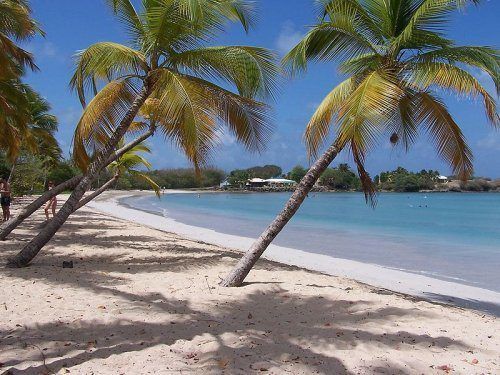 It is advisable to visit the island during the dry season from December to May. In addition to sunny and dry weather, this part of the year can be chosen to avoid hurricane season. The disadvantage of this period is the high prices during the winter months, but on the other side of the island you will enjoy. Perhaps the most attractive period to visit Martinique is during December and January, especially during the Christmas and New Year holidays.

Learn about the best tourist places in North Dakota