Tourism in Colombia .. Colombia is the most beautiful tourist destination in South America ..

Tourism in Colombia .. Colombia has many historical and natural places such as its views of the Pacific Ocean, the Caribbean Sea and the Andes Mountains, which makes it a distinctive tourist destination.

Traveling to Colombia .. Find out the temperatures and the best times to visit in Colombia .. 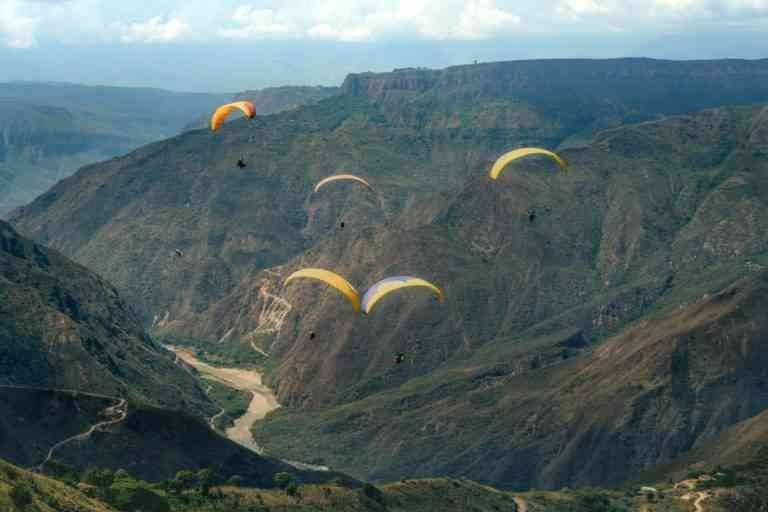 Traveling to Colombia .. Know the temperatures and the best times to visit in Colombia..Colombia is a tropical country and the weather is varied, as its heights are different depending on each region, so we advise you when visiting to take a variety of clothes and the best time to visit Colombia is from December to March where the weather is moderate So it is the peak of the tourist season, while the rains fall heavily from April to June. From July to August, this is the time of drought and also from September to November. Read also: Tourism in Ecuador .. 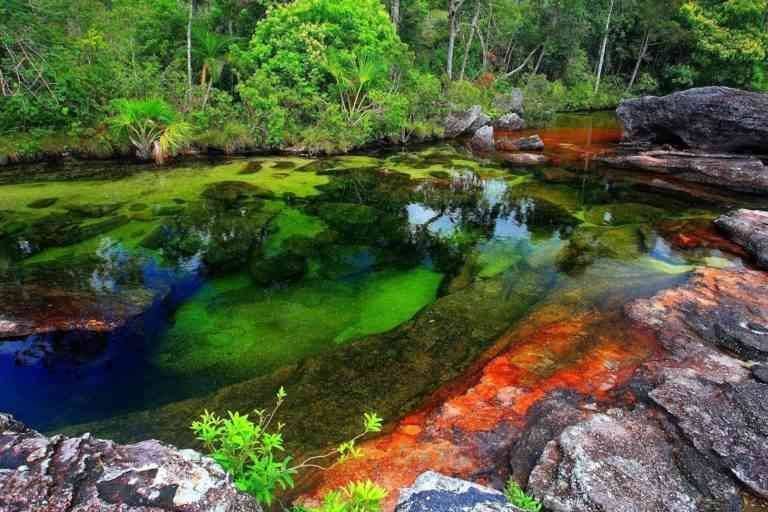 “Crystal River” .. the best tourist attractions in Colombia..the best places of tourism in Colombia, there is in a remote area and can only be reached by road, you can go to it on foot or for more enjoyment you can ride horses and the Crystal River is one of the most beautiful The natural regions of Colombia and even the world, due to its colorful waters, it is called the “River of Five Colors”, where there are algae that turn into scarlet, blue, pink and other colors alongside the soft yellow sand and green plants around it, so a beautiful artistic painting will dazzle both He sees it so you don’t miss g It showed him the river is definitely worth a visit.

Tourist places in Colombia .. “Cartagena” .. It is considered one of the most beautiful cities in Colombia and tourists go to it from everywhere because it combines the antiquity of the past and the beauty of the modern so it is distinguished by its colorful old buildings with colonial architecture and contains museums, historical palaces and cobbled streets as there are areas Wonderful natural nature, such as beaches overlooking the Caribbean Sea in addition to the latest hotels, restaurants and various entertainment centers, so it is gaining wide popularity with tourists.

The most beautiful places of tourism in Colombia .. “Tayrona National Park” .. 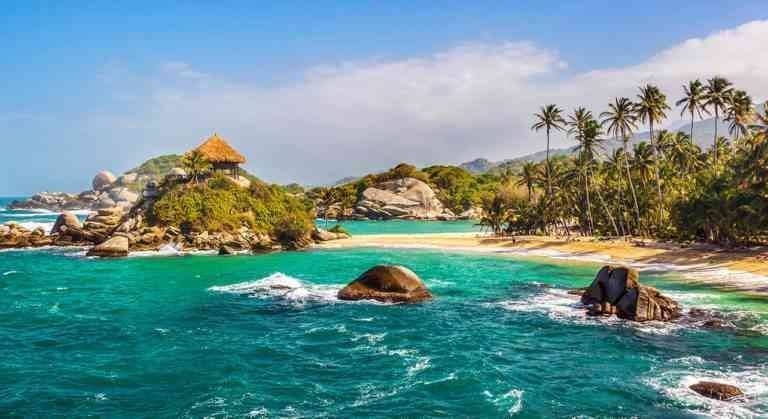 The most beautiful places of tourism in Colombia .. “Tayrona National Park” .. If you are a nature lover, dear tourist, you should visit the National Park of Tayrona to see its beautiful beaches around it and palm trees and coconuts in addition to gathering birds around them, including what is rare, such as the Andor condor, it is An exhibition of extinction, as there are a number of wild animals, such as monkeys on trees and lizards, so for sure you will enjoy the intertwining of these beautiful landscapes of bays, trees, tropical forests, animals and birds. Do not miss to take memorial photos to perpetuate these moments. Read also: Tourism in Peru .. Your guide A great tourist trip 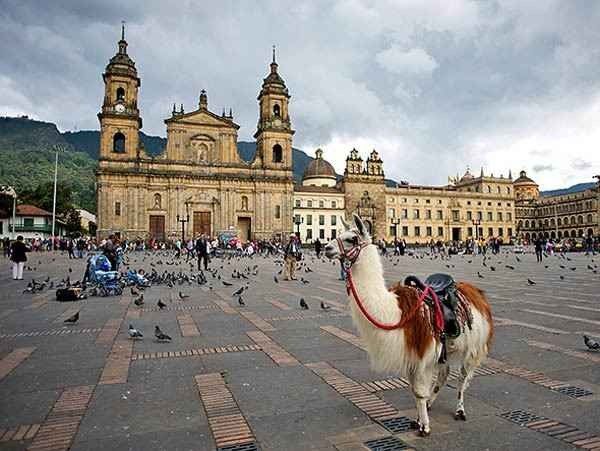 Tourist places in Colombia .. “Bogota” .. It is one of the largest cities in the continent of South America, it is located alongside the Andes Mountains and there are the largest airports in Colombia and we recommend you to visit them to see the Gold Museum and the Planetarium and get to know the Los Angeles area with its historic buildings in addition to the spread of public parks With its vast green spaces, the city organizes a large number of festivals and celebrations that appeal to visitors in addition to many restaurants that offer delicious dishes besides museums, such as the Museum of Del Oro, it is the most famous as it includes amazing artifacts that even contain the largest emerald piece in the world M .

Tourist places in Colombia .. “Villa de Leyva.” If you are a fan of art, dear tourist, you should go to a small town called Villa de Leyva. It was established in 1689 AD by the Spaniards and is located 4 hours by car from the capital Bogota Due to the establishment of a large number of celebrations and festivals, you will also enjoy watching the beautiful architecture that reflects the impact of colonialism on the country and it is similar to the city of Andalusia where the white buildings are intertwined in their construction of wood and are characterized by the old style where the paved streets do not miss you buying your needs and souvenirs from the markets in which they are presented Producer T handicrafts, textiles, clothing, antiques and other great products.

“San Gil Colombia” .. the most important tourist places in Colombia .. 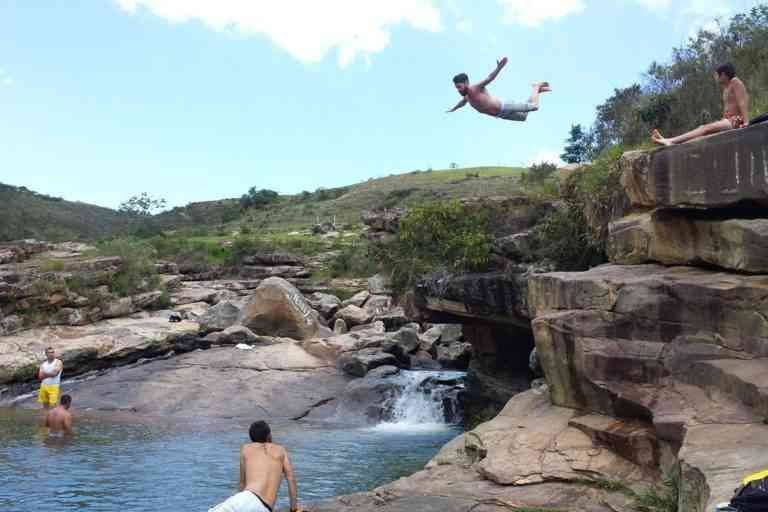 “San Gil Colombia” .. The most important places for tourism in Colombia .. It is located in the northeastern part of Colombia, it was created by the Spanish in 1689 AD and it was called the tourist capital in 2004 AD due to the large numbers of tourists going to it to enjoy practicing Kayaking, mountain biking, mountain climbing, outdoor hiking and lakes swimming are also available. You can also experience hopping over the mountain in Parchute for more adventure and excitement. Read also: Tourism in El Salvador .. 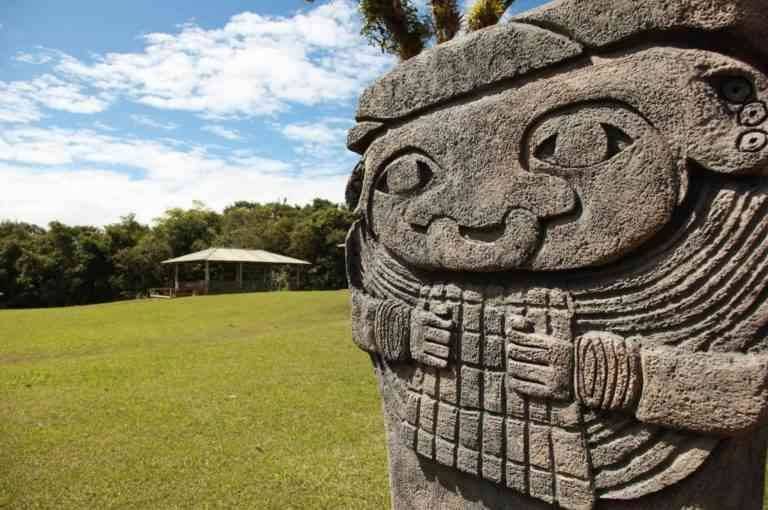 Tourist places in Colombia .. “San Augustin” Colombia .. Although it is a small city, it is a place worth visiting to own scenic landscapes in addition to the historical aspect represented in various archaeological sites, including more than 500 statues and various stone sculptures of animals Like tigers, birds, and reptiles, like snakes, date back more than a thousand years, in addition to human figures. There is also the archaeological park “San Agustin”. 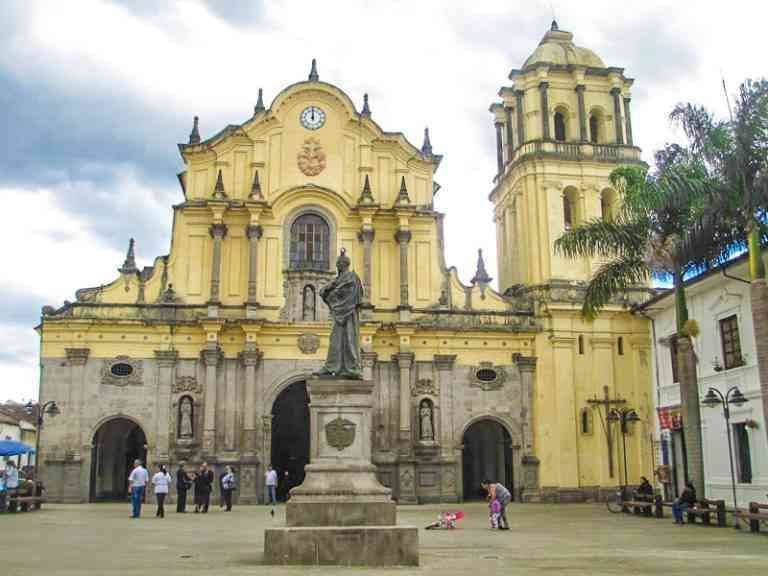 “Popayan colombia” .. The best places for tourism in Colombia .. It is located in the southwestern part of Colombia and is also called the Ciudad Blanca, which is the white city because most of its buildings are white, it was established in 1537 and there are a number of palaces and schools dating back to the era of the occupation It is also distinguished by its beautiful climate and it is the appropriate place for lovers of tranquility in which you will get rid of your pressure in a refreshing atmosphere, especially as its climate is moderate.

“San Andres Island” .. the most important tourist attractions in Colombia .. 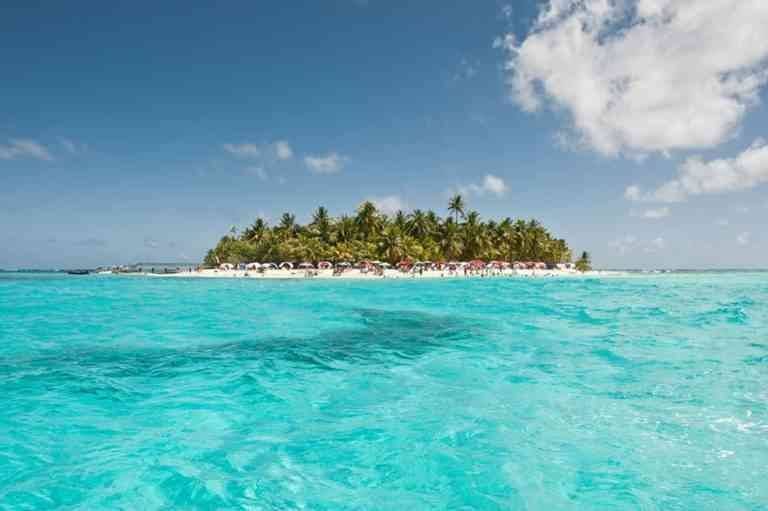 “San Andres Island” .. The most important tourist landmarks in Colombia .. officially part of Colombia, declared by UNESCO as a natural reserve within the world heritage sites so we advise you to visit it because it is one of the most beautiful natural monuments that you will see as it is a large island around which there are a number of islands The small and there are hills and green areas of palm trees and various plants such as the hellish plant widely spread in it and the island has two eastern sections with charming beaches and local residents, while the western part is rocky and has a small population and the island is characterized by its view of the Caribbean Sea where beautiful blue and warm water Which includes a variety of fish and coral reef, colorful beautiful diving do not miss to watch this charming marine life too. Read: Tourism in Argentina .. 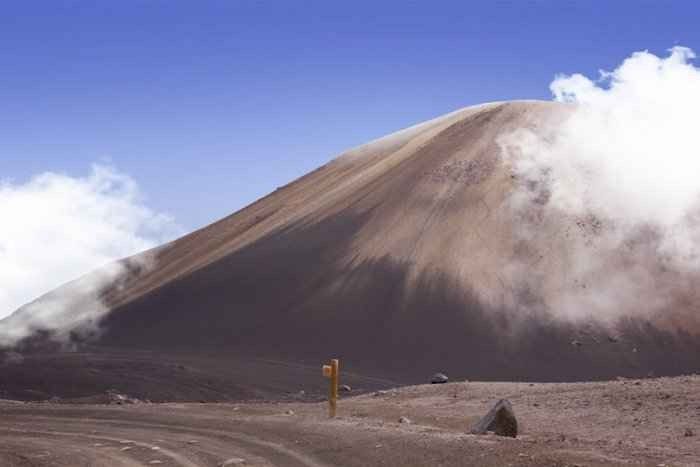 Los Nevados National Park is one of the most beautiful parks in Colombia and is characterized by its presence above the volcanic formations, which gives it a wonderful beauty in addition to its snow-covered peaks, and you can dear the tourist camping in it to spend an enjoyable night in the wild and you have to walk around to see rare animals In it. 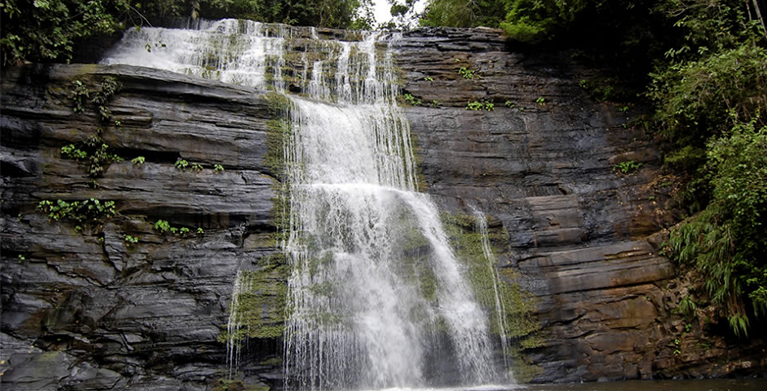 Los Katios National Park is listed among the World Heritage sites by UNESCO because of the presence of a large number of plants in it in addition to the hills, swamps, waterfalls and other beautiful landscapes such as the Serrania Mountains and the Atrato River, so we advise you, dear tourist, to visit this spot full of scenery Witch and never miss a photo shoot with it. ”Guatape Rock. 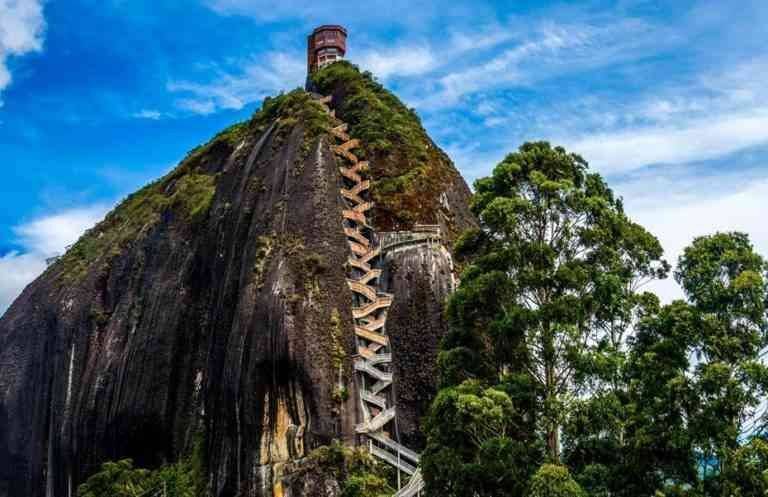 “Guatape Rock” is considered one of the most famous tourist places in Colombia. It is a very famous rock that tourists go to see and take pictures next to it because it weighs about 10 million tons and its height is 200 meters. It is a giant rock next to the beautiful green areas around it and you can dear the tourist climb it from A long lane path with 649 steps is an interesting adventure worth experiencing.

Traveling to Colombia .. Here’s the most delicious cuisine in Colombia .. 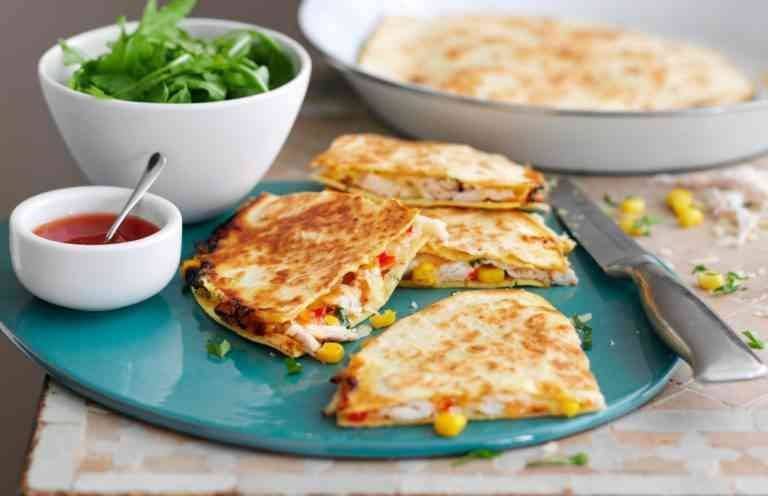 Traveling to Colombia .. Here are the most delicious dishes in Colombia .. The Colombian cuisine is distinguished by its diversity in its dishes and its creativity for everything that is new as it offers local and international dishes. Meat is used extensively, so we advise you to make sure before eating that the meat is halal where pork enters into the cuisine Many of the most famous dishes are “Ajiaco” Colombia, which is a chicken and potato soup with rice. Drinks are prepared from delicious tropical fruits. One of the most famous restaurants is “McDonald’s”, “Frisbee” who drives delicious fried chicken and “crepes”. Go to it if you are a fan Ice cream and desserts.

Hawaiian tourism .. Learn about the most beautiful tourist places on the island of “dreams” ..