I will captivate you Black Square in the Alhambra Palace

The Alhambra in Spain It is one of the most magnificent buildings in the world and one of the quietest and most beautiful tourist attractions in the continent of Europe, offering the masterpieces of Maghreb art and architecture when it reached its climax in Andalusia, and because it is a destination full of culture and history, it has been included in the list of UNESCO World Heritage sites.
It is a fortress and an archaeological palace dating back to its construction during the rule of Beni Al-Ahmar for Granada after the fall of the Almohad dynasty in Andalusia. Its first parts were built in the seventh century AH and it took about 150 years to build, as there are some parts that were built during the eighth century AH.
The Alhambra Palace was named by this name because of the color of the walls it is distinguished by, or because of the red soil that is distinguished by the hill above which the palace is located, or perhaps the name was derived from the royal family of Bani Al Ahmar who built this palace and which ruled Granada between the twelfth and thirteenth centuries AD.

Where is Alhambra Palace located in Spain? 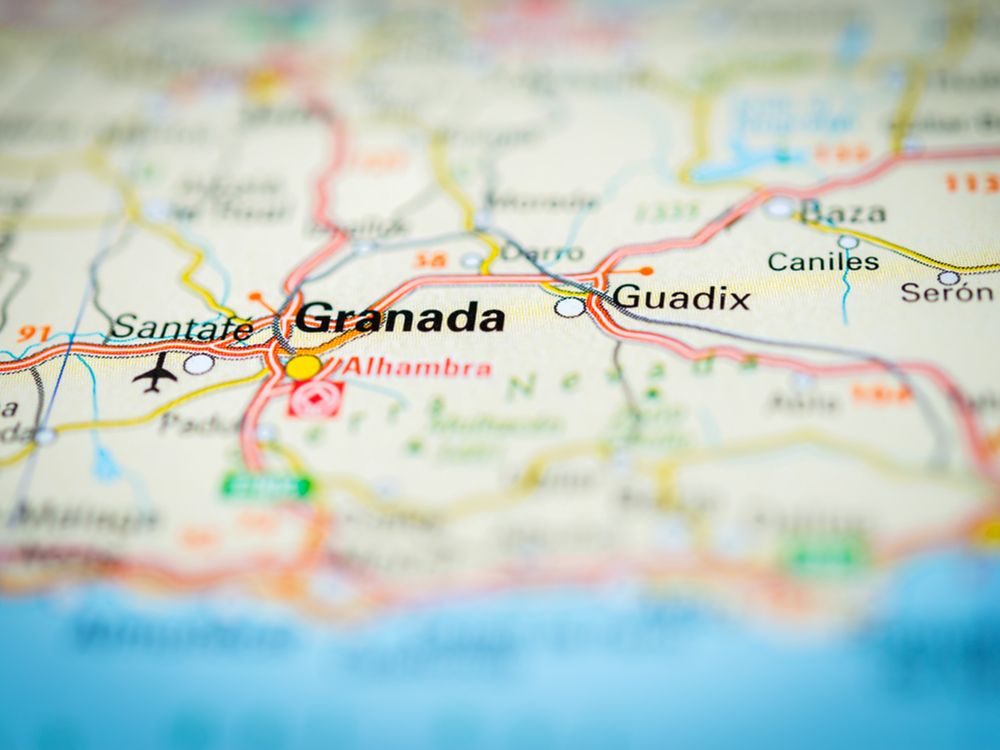 Where is the Alhambra located in Spain? .. The city of Granada and its location in Andalusia

The Alhambra Palace is located in the city of Granada, which is located at the foothills of the Sierra Nevada mountains at an altitude of 738 meters above sea level, which is about 420 kilometers from Madrid, and it is the capital of the Province of Granada located in the Andalusia region or Andalusia Autonomous Region in southern Spain.
The palace lies at the top of the Sun Hill, or as it is known in the Spanish Sero del Sol, on one of the banks of the River Daro, on the western side of the city of Granada, and it is also bordered by the neighborhood of Alpsin and the neighborhood of the Casbah and Paradise of the Corporal, and thanks to the strategic location of the palace in the city of Granada you can get a breathtaking view of the entire The city and surrounding meadows.
* Link you care about Tourist trip program to Granada

How to reach the Alhambra? 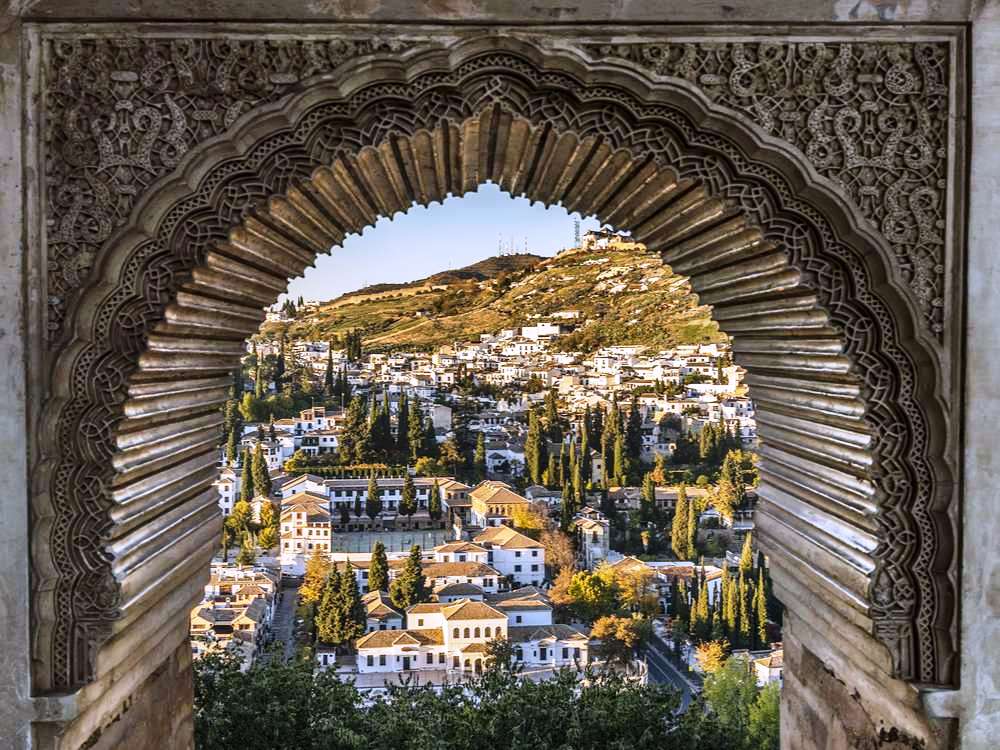 Access to the city of Granada is by regular buses from various Spanish cities or flights from Madrid or by train twice daily, and to visit the Alhambra from the center of Granada there are several means of transportation that you can choose between, but it is better to go on foot to enjoy the natural beauty of the areas surrounding the palace Or to see more historical places on the way, which cannot be won when riding on other means of transportation.
If you want to use public transport, there are two lines for buses that arrive at the Alhambra Palace, which are Line No. 30 and Line No. 32, which start from Plaza Nueva, and of course if you prefer taxi rides you will find that available, and the same thing if you prefer to drive your own car Or rented, in which case you can park your car in one of the parking lots in Paradise Corporal.
To choose the best paths that lead you to the Alhambra from Granada city center on foot, the path from Plaza Nueva via the Cuesta de Gómeres Street is the most beautiful and historically important, and you can also reach via the Cuesta del Rey Chico Street that starts from the southern bank of the River Daro, This road is less interesting in terms of historical attractions, but in contrast it is more romantic with landscapes.
You can simply join organized tours, for example: a day trip in Granada including the Alhambra Palace and the Gardens of Paradise Corporal.

Landmarks of the Alhambra in Spain 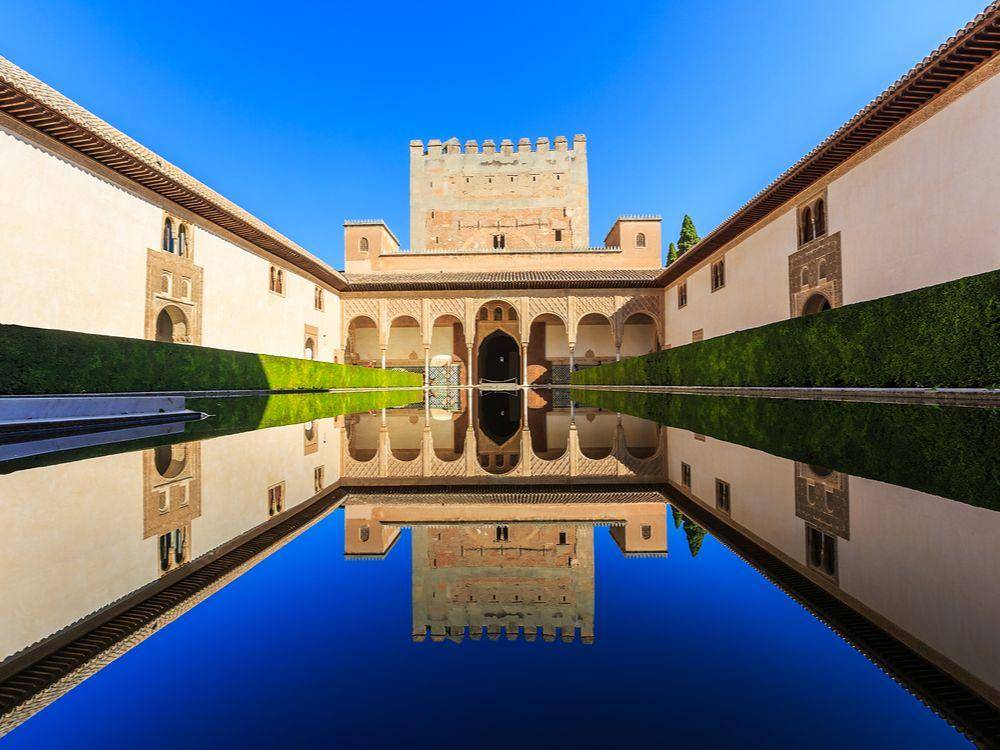 One of the pools inside the Alhambra Palace in Spain

The Alhambra Palace occupies an area of ​​142 thousand square meters, and it extends 740 meters in length and 205 meters in width, and among the most prominent landmarks near it is the Kasbah of the Alhambra, which represents the fortified defensive fortress above the plateau and is surrounded by a wall and a group of defensive towers of up to thirteen towers, and near it There is a lush garden called “Corporal Paradise”.
Perhaps the Black Square in the Alhambra Palace is the most famous landmark, but there are many other beautiful architectural features without doubt in this palace, starting from the current main entrance to Al Hamra, which is the Gate of Sharia, to the Black Square, through a beautiful lobby with its decorations, an exquisite square with its fountains, and a garden lush with its plants.
Your journey begins with the large basil courtyard, which is a large rectangular square filled with basil trees and surrounded by a pool of water, and is characterized by that huge portal that leads to the foyer of the pool, then comes the lobby of ambassadors, also known as the foyer of Qamarish, and its dome rises 23 meters and is topped with a tower of Comoros.
From the courtyards and courtyards there is the cypress patio, which you can reach after the foyer of the pool on the right, and next to this courtyard there are the royal baths that are distinguished by their colors, lights and Islamic artistic drawings, and from the eastern side to the foyer of the pool there is the hall of the two sisters that leads to the foyer of lions from its southern door.

Black Square in the Alhambra Palace 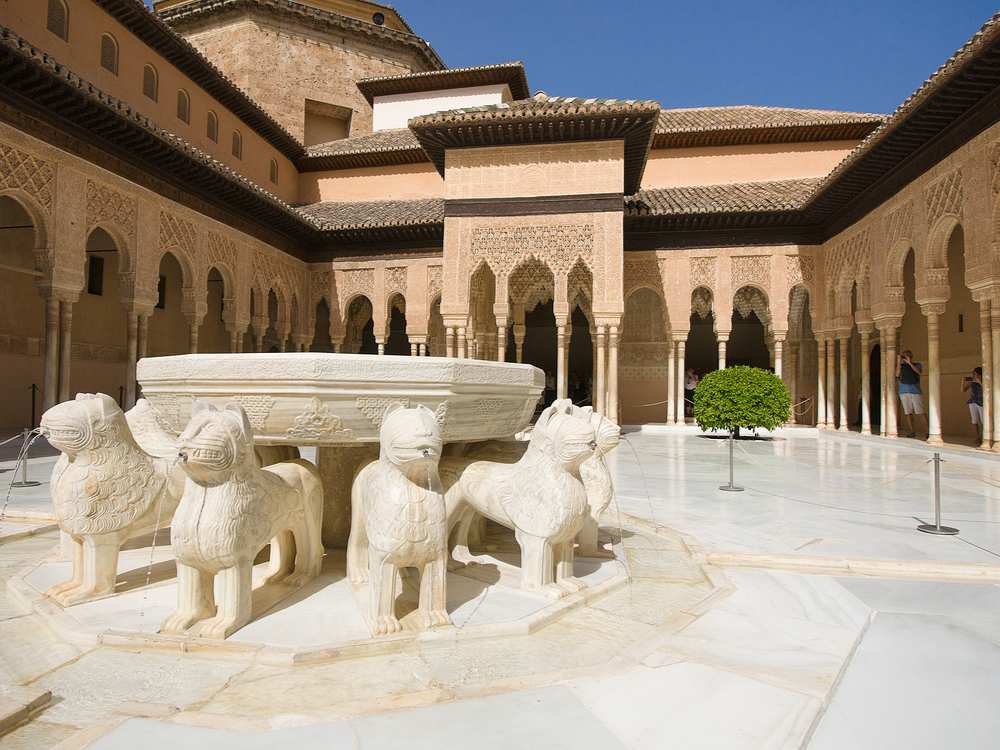 The wings are the most famous and were created by Sultan Muhammad Al-Ghani Billah, which is a rectangular foyer, 35 meters long and 20 meters wide, surrounded by arcades on its four sides with 124 columns of white marble, and on each side of the four square there is a ribbed dome .
The most distinctive thing considered to be the icon of the palace is the Fountain of Lions located in the central square of the Lions in the Alhambra Palace. Its round basin was made of alabaster and surrounded by twelve statues of lions carved from marble and exudes from its mouths water in an amazing way, except that the Spaniards suspended it in an attempt to reveal the secret Scientific and technical behind it, where the water was flowing according to day and night hours on a regular basis, highlighting the ingenuity of Muslim engineers at the time.
Al-Aswad Square connects you to a number of halls that are available to Al-Hamra Palace, which is the hall of Bani Siraj from the south side, the Hall of Kings or as it was called the Hall of Justice from the east, and the view of Lendracha and the hall of the two sisters from the north side of the Al-Aswad hall.

Horoscopes, doors and other landmarks

If you want to get to know all the corners of the Alhambra Palace in Spain, try to reach all the towers and doors, such as the Qamarsh tower, the Al-Matzin tower, Al-Aqil tower, Al-Akam tower, Al-Asira tower, Al-Amirat tower, Water tower, and Al-Ras heads. Drink inside the fences, and the door to Sharia. Do not miss the visit to Al-Zawiya and Al-Rawdah, as it is one of the deserted monuments. It was a chapel and a burial site for the kings of Bani Nasr.

Important advice before visiting the Alhambra 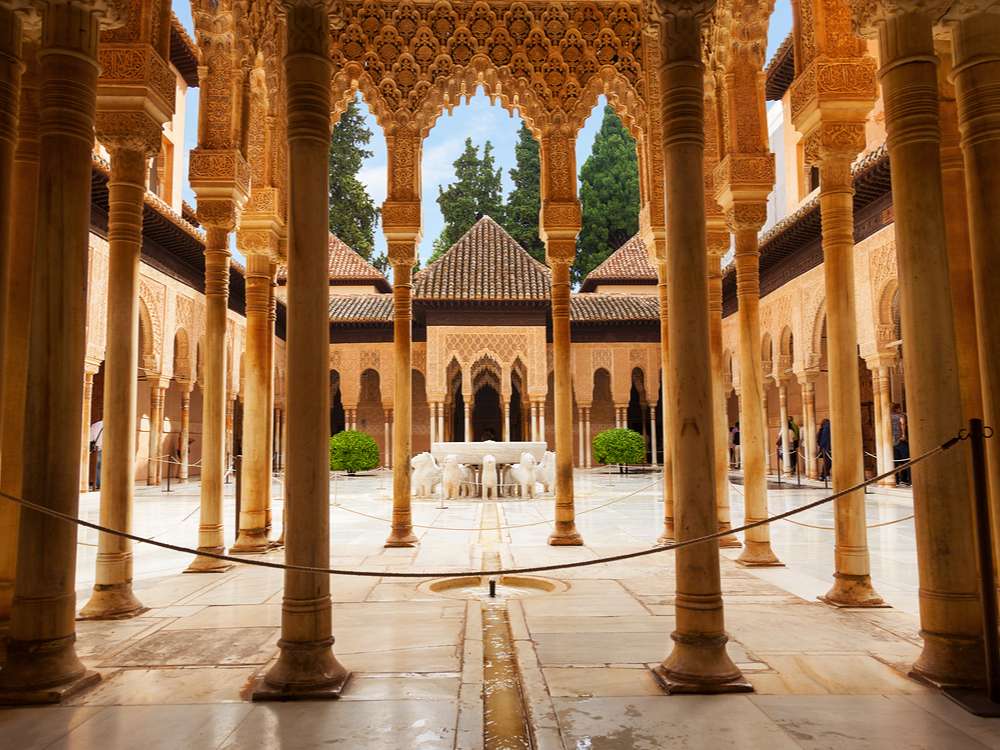 The Black Square in the Alhambra Palace is surrounded by columns

You should take into account before traveling to Spain that the opportunity to reach the Alhambra Palace is limited to a certain number of visitors per day, and therefore you must book tickets early to ensure you enter the palace, the duration of the visit is limited to only 3 hours, and the last opportunity for you to enter is within an hour One before the closing date. As for entering the palaces of Bani Nasr, it is limited to only half an hour as is usually indicated on the ticket, due to the restrictions imposed on the maximum capacity of people inside it, which is 300 people every thirty minutes.
Granada gathered between East and West thanks to its historical and geographical connection with the Islamic world, and today it is a modern and modern city that still preserves that historical heritage and ancient artistic heritage, and perhaps the Alhambra Palace is the most wonderful of those monuments that do not transfer you geographically only from your country, but it toures you in historical tourism It takes you to a time when everyone desires in Andalusia or the lost paradise.