A tour to Sri Mahamariaman Temple in Kuala Lumpur 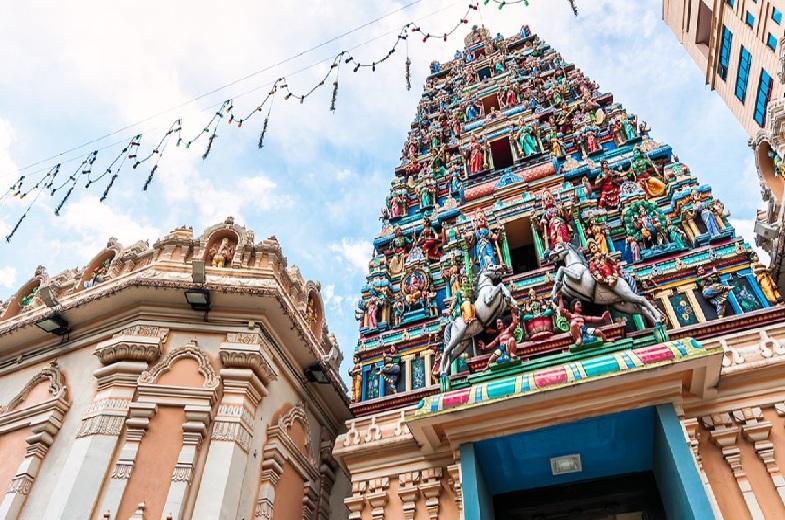 History of the temple

South of Jalan Hang Locker, tucked away in Jalan Ton Li, there is a Sri Maharamariman temple adorned with extravagance. The main Hindu temple in Kuala Lumpur, which houses Spanish and Italian tiles, precious stones and gold in its design, is an asymmetric view located between two Buddhist temples on the edge of Chinatown.

This large and elaborate Hindu temple was established by Tamil immigrants, from South India, who reached Malaya as contract workers for railroad and road construction or working on rubber plantations – and their primary purpose was to act as a consolation from the cruelty of working life. The construction of the temple began in 1873 with a lot of continuous restorations and decorations occurring over the years.

A major restoration occurred in 1968 with the construction of the impressive 75-foot-high Raja Gopuram tower, which is said to be the threshold between the physical and spiritual world. In fact, walking through this doorway to the temple is like messing around the switch – outside, on the streets, the air practically underestimates and the sound of traffic deafens: Inside, there is a sense of serenity, the floor is cold, the atmosphere is charged and the air is fragrant with roses, camphor (incense). Constructed by two Indian sculptors, there are 228 Hindu idols – frozen in dozens of scenes from Ramayana – adorning the five-layer multi-colored gobrorm (entry gate). Besides the intricate sculptures of Hindu deities, gold and precious ornaments, the temple is decorated with hand-painted motifs depicting early Hindu stories. 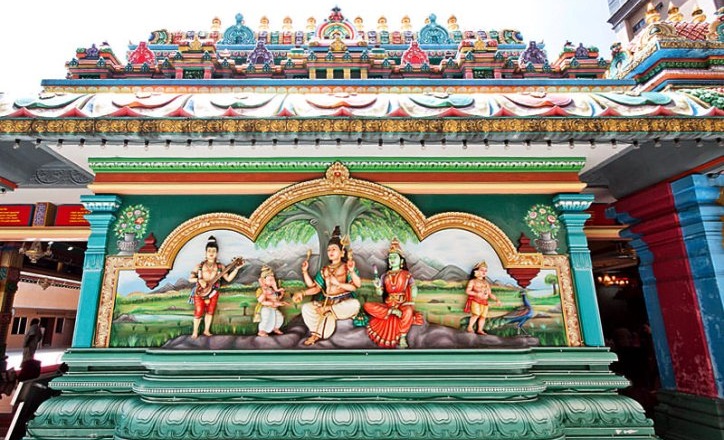 The early construction of the South Indian-style temple was funded by Thambusamy Pillai, one of the pillars of the ancient Indian community in Kuala Lumpur. The garbagraham, or holy retreat, is located inside the room where the main image of the god, Maha Maha Mariamman, is located. This hall, where the incense sparkles in the air, and the priests perform Bokha (prayer) – low, deep and anonymous chants chanted by the disciples, filling the hall with sound.
The main prayer hall features a domed ceiling with richly decorated decorations where there are three shrines. There are four smaller shrines surrounding the main temple building. These shrines are the house of dolls of Lord Ganesha, Lord Moruga, Lakshmi (Goddess of Wealth) and more photos. The temple has been undergoing renovations recently, and now looks more impressive than ever.

The temple was named after the famous Hindu deity, Mariaman, who was seen as a protector of the Tamils ​​while visiting foreign lands. The intercession of the goddess was often sought to provide protection against disease and “non-demonic accidents”. As the oldest of the temples, it is joined by many fans who cross the temple, especially early and late in the day to show their respect (and make donations) to the gods. In keeping with Hindu traditions, the temple is dedicated once every 12 years. 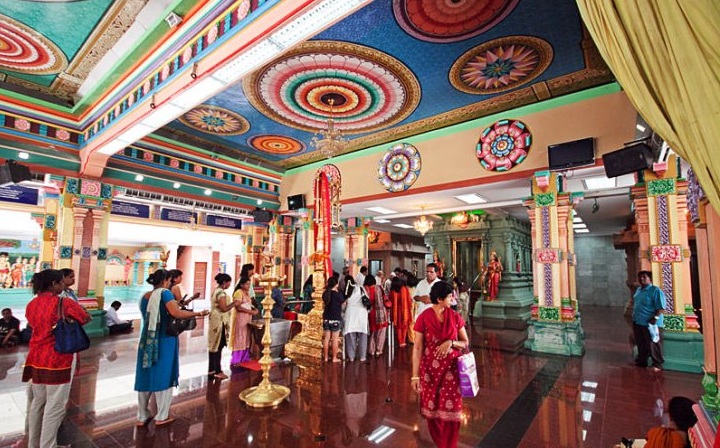 Notable features during the annual Thaipusam Festival are the large and silver chariot chariot, 240 sports bells and a pair of horses, dedicated to Lord Morugan (Subramanium). It is used to transport statues of Lord Moruga and his peers, Vale and Tiffanyani, through the city streets en route to Batu Caves, on the northern edge of the city. The procession that takes place in January or February each year, where large numbers of Hindu fans converge on the temple to participate in rituals that are usually preceded by a half hour cheering, accompanied by music. For the rest of the year, the 21-foot vehicle – built at a cost of RM350,000 – is kept in a “cellar” (actually a building on the side of the temple that can be seen walking along Jalan Hang Lekir – the first street on the left along Jalan Town HS me from the temple).

Originally located near the Kuala Lumpur Railway Station, this temple was moved to its current location in 1885. It is always open to the public. There is a free facility near the entrance, where you can leave your shoes before entering the temple. Outside its pyramid entrance there are florists selling wreaths as well as stalls where sweetmeats and other dishes can be. The red and golden pedestal, the glossy cymbals and the polished wood in the temple can be slightly hanging: inside it is almost a place for daydreaming – outside on the streets is Kuala Lumpur in the daytime.

Explore the splendor of underwater life in the Philippines

Find out the list of cheap tourist countries without visa