Abu Dhabi Landmarks for New Visitors: 5 Places You Should Not Miss

The landmarks of Abu Dhabi, the capital of the United Arab Emirates, attract millions of tourists from all over the world as it is located in the center of a modern, wonderful and vibrant city throughout the year. Abu Dhabi landmarks are witnessing continuous construction and continuous development to suit the needs of the residents as well as the growing desires of the swimmer. At a time when everyone is waiting for the opening date of the Louvre Museum – Abu Dhabi, which is expected very soon, there are also amazing landmarks in Abu Dhabi that tourists love and want to visit. He has not toured the distinguished emirate yet. That is why we will present to you in “He” 5 of the wonderful landmarks of Abu Dhabi that new visitors should visit and never miss.

The Sheikh Zayed Mosque in Abu Dhabi was chosen according to the Tourism Choices Awards organized by the 2016 Trip Advisor website in the second place as the most amazing tourism landmark in the world after Machu Picchu in Peru, surpassing wonderful landmarks such as the Taj Mahal and St. Peter’s Basilica. The Sheikh Zayed Mosque is among the largest and most inspiring mosques in the world and can contain 41,000 worshipers together. The mosque was opened in 2007 after 11 years of painstaking work for the building and it carried the vision of Sheikh Zayed and was named after him. The engineers of this mosque worked according to the idea of ​​”gathering the world” in a design that embraces 3 different engineering styles of mosques, and materials were used from India, Morocco and Malaysia to obtain the best result. A visit to this mosque is necessary with 82 dome, 4 minarets, 1000 columns and 7 of the largest candlesticks in the world and the largest carpet woven from humans in the world and others ….

Qasr Al Hosn is the oldest historical building in the emirate

Qasr Al Hosn is considered the oldest tourist attraction in Abu Dhabi, as it is the oldest historic building in the emirate. It was the home of the ruling Al Nahyan family in the emirate, and it tells the story of Abu Dhabi and the history of its people. Oral testimonies and stunning historical imagery breathe life into this important edifice. The voices of contemporary Emiratis embody the history and transformation of Abu Dhabi, as well as the role of the main Al Hosn Palace as a vital symbol of Emirati heritage, culture and traditions.

The fortress was built in the 1860s as a watchtower made of sea and coral stones, and it has a dominant position overlooking the sea, knowing that it later turned into an impenetrable fortress. Thanks to the shell reflective feature, the fortress walls shine in the sunlight to become a distinctive beach sign, welcoming the merchants coming to the area.

It is noteworthy that the Qasr Al Hosn Center contains a permanent exhibition that includes many archeological collections that are related to the history of Abu Dhabi and the Gulf region and can be accessed for free.

When we want to think about the most important hotels in the UAE, many people think directly about the “Burj Al Arab”, but the Emirates Palace Hotel in Abu Dhabi is no less beautiful and amazing. When it opened in 2006, it was the most expensive hotel in the world, as it cost at least $ 3 billion before it became the second most expensive hotel. Currently, by the addition of the Marina Bay Sands Hotel in Singapore and designed by British engineers, it is a 7-star hotel. The main part consists of 114 white domed buildings surrounded by 40 hectares of green gardens between the Corniche and the hotel’s beach and marina. And if you do not want to stay in one of the luxury hotel suites, visiting its lobby is totally worth it, especially with the dome that rises 72 meters! One of the main attractions of the hotel is the cappuccino with a touch of gold … Yes, 24 karat gold or maybe you want to get a piece of pure gold for the money you put in the ATM … And if you want to spend $ 15,000, you can reserve a night in one of the private suites where Elton John, George Michael, and Michael Jackson spent nights in Abu Dhabi.

Perhaps the first thing that you will see when you arrive in Abu Dhabi by plane is this large and red-covered site, which is the only park in the world dedicated to the Formula 1 Ferrari racing icon, which opened since 2010 and was ranked in the top tourist attractions in the Middle East in 2015 by the World Travel Awards. This park is the largest indoor park in the world and includes great features, especially “Formula Rossa”, the fastest Roller Coaster in the world and more than 20 other games … The Ferrer-Wollard roof, which has an area of ​​more than 200,000 meters, can adapt to different temperatures in Abu Dhabi to secure the best Ambience for visitors.

Yas Viceroy Abu Dhabi is a landmark of Abu Dhabi

Yes, this hotel is considered one of the most important landmarks of Abu Dhabi, as it has a unique global feature, as it is the only 5-star hotel based on the Formula 1 race track, which is Yas Marina Circuit, which hosts the 21st race of the F1 season. Designed by engineers Hany Rashid and Les Ane, applauded in all engineering forums around the world, it opened in 2009 and consists of two huge towers, one located in the ring and the second in the marina and connected by a bridge of glass and iron in a stunning scene! While celebrating elegance during the day, it turns into a magical scene at night due to 5000 lights that change constantly. The hotel includes 7 distinct restaurants that simulate different tastes. 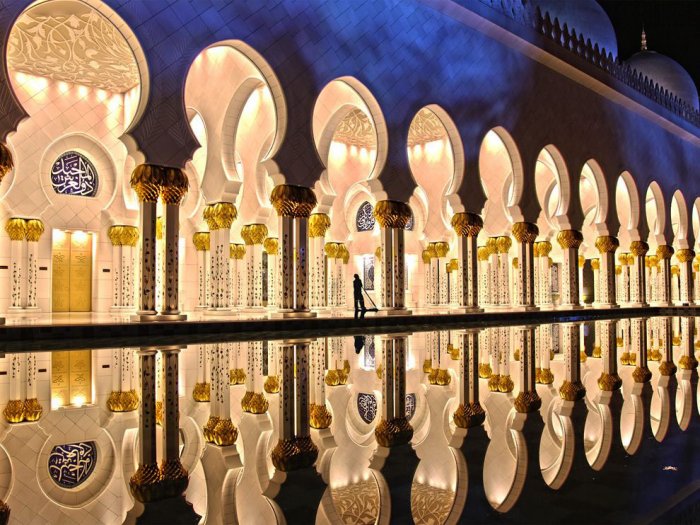 A wonderful sight from inside the Sheikh Zayed Mosque 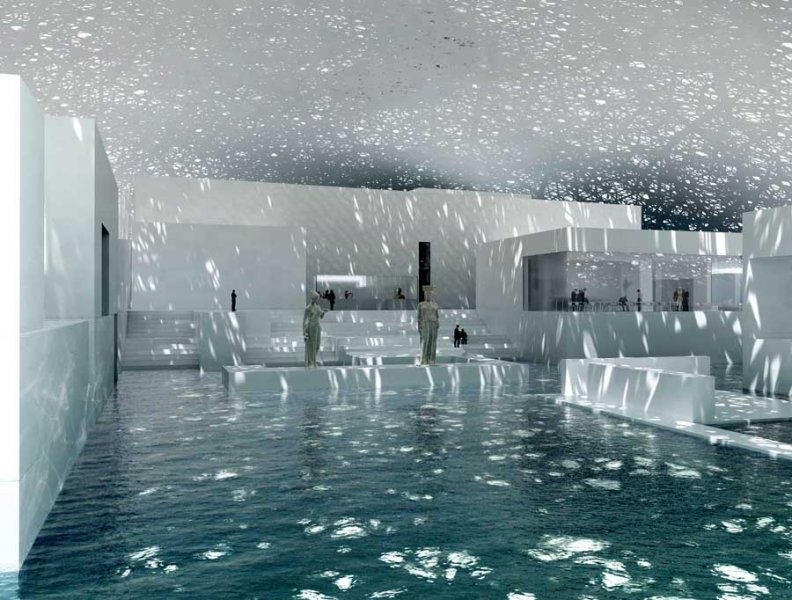 A scene from inside the awaited Louvre Museum 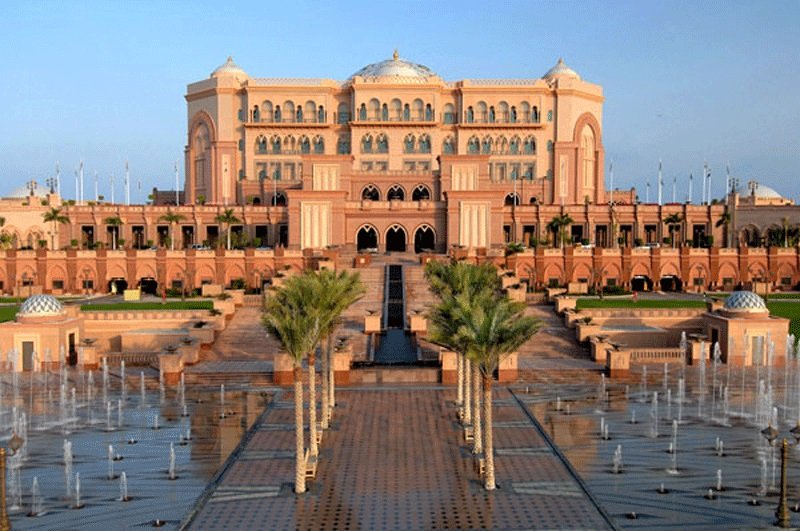 A scene of the Emirates Palace Hotel 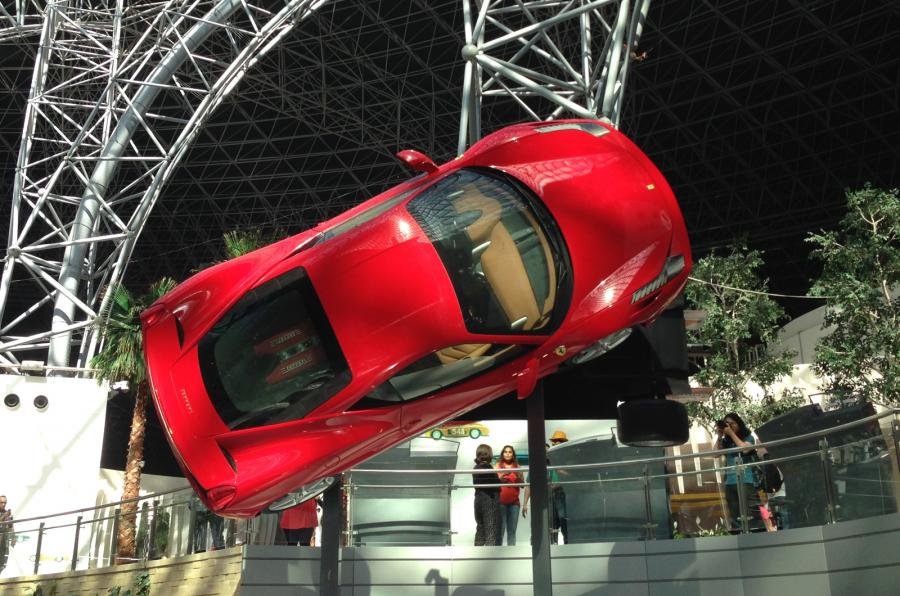 Inside the Ferrari world 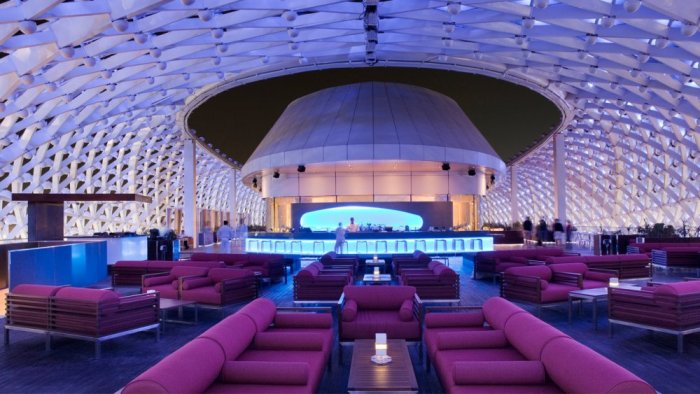 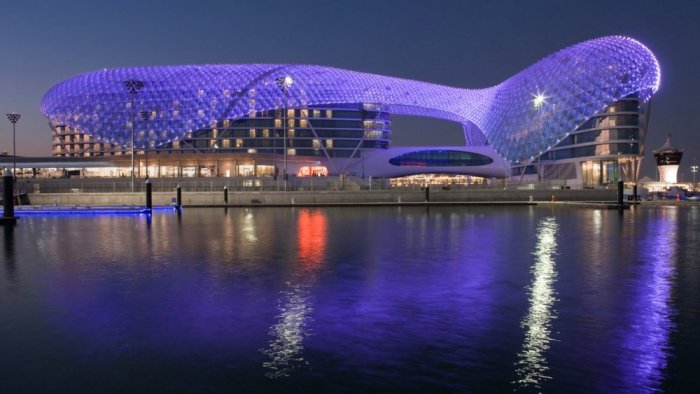 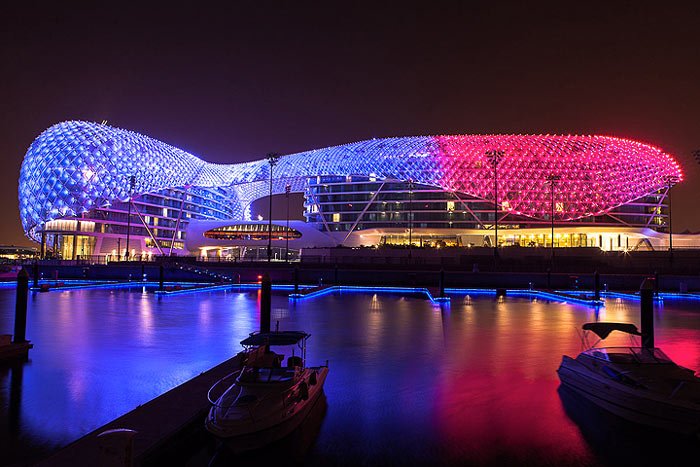 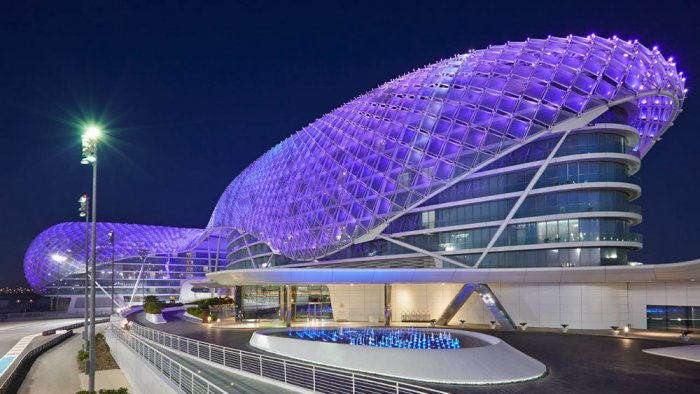 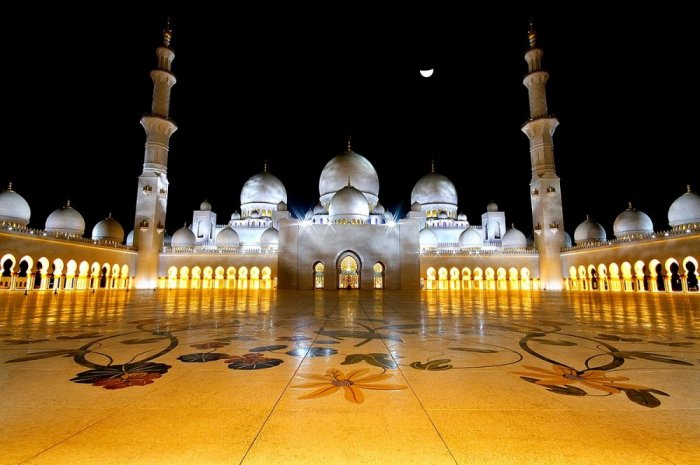 A wonderful scene for Sheikh Zayed Mosque at night 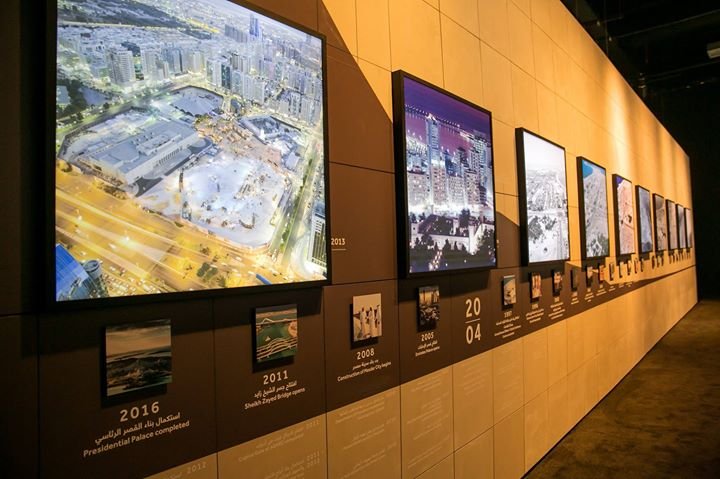 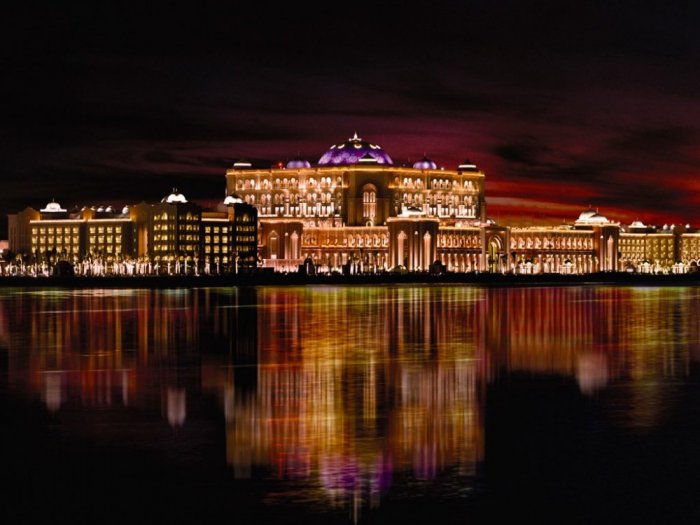 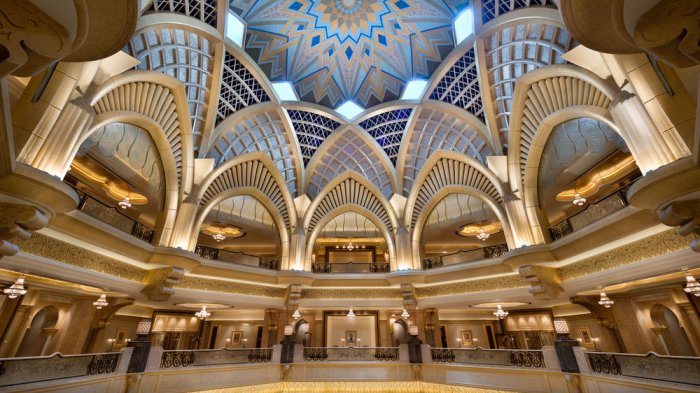 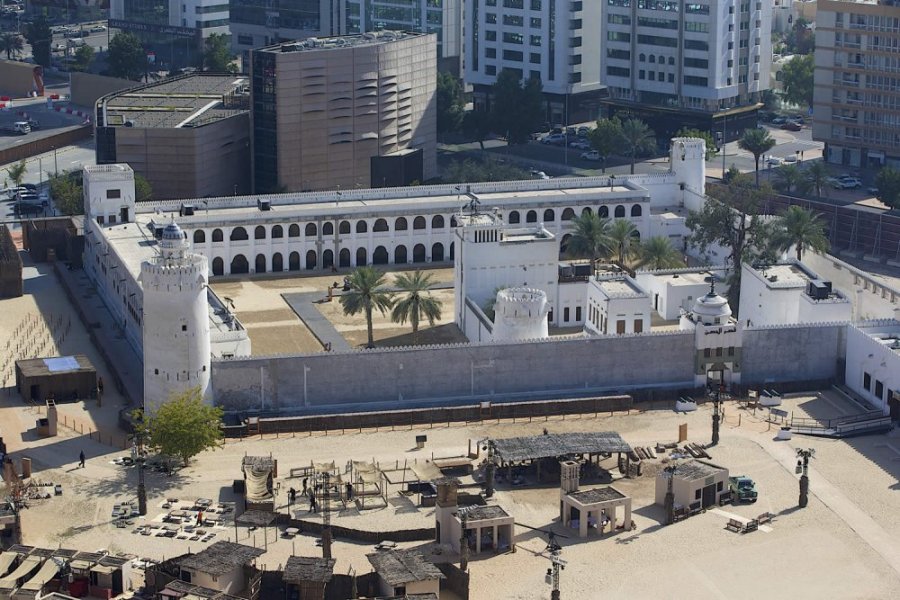 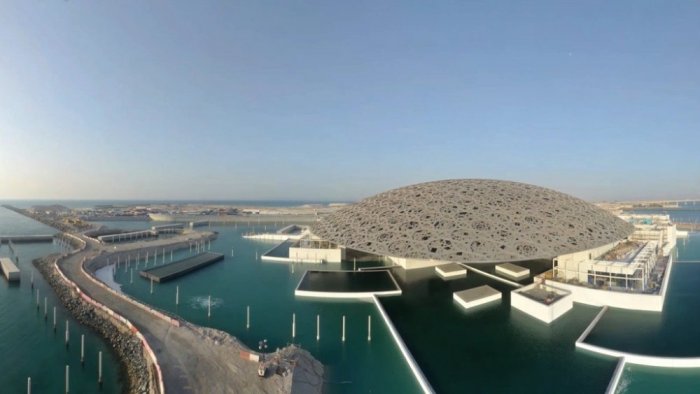 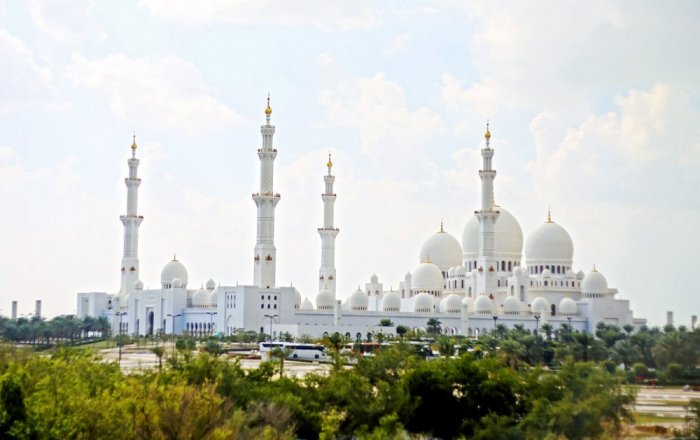 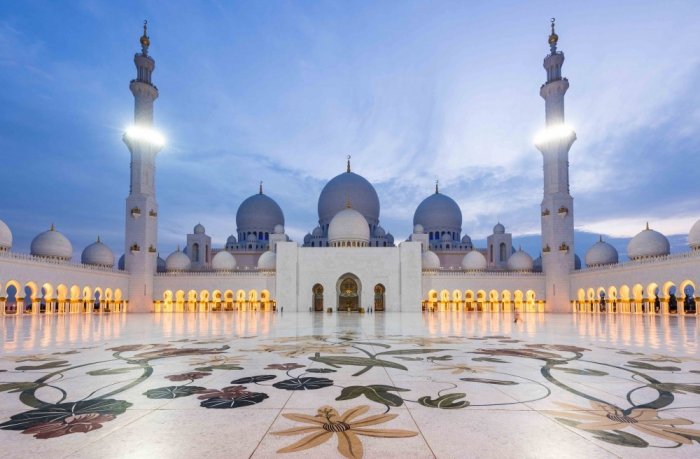 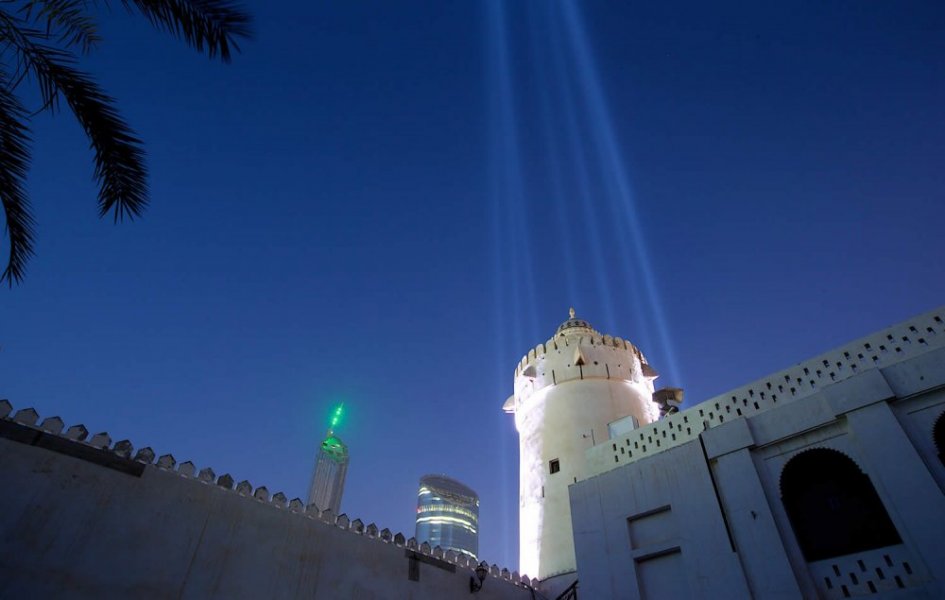