Report on the Delta Hotel Alexandria

Where is the city of Bahla located

What is the capital of Somalia

The most important tourist attractions in Tangier

Stuttgart is located in southern Germany, which is a basin surrounded by orchards and hills covered with forests, and at the bottom is a valley and river Neckar, and the largest part of the city is beautiful historical buildings, and the houses are located on the surrounding slopes in places where there are hills, and there are many trips in the corridors This is the city of Stuttgart, as it provides opportunities for travelers to adventure and explore, in addition to being an important center for fruit growing, and a place for mineral springs and thus is an important source for industries. 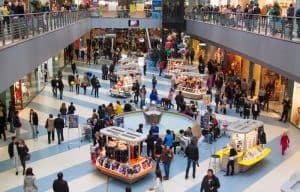 State Gallery
The State Gallery is home to the city’s art collections, and is one of the places that contain the most visited museums in the world, and is famous for a wonderful collection of beautiful paintings dating back to the twentieth century, and also includes many masterpieces of German Renaissance art, and the buildings of this exhibition are three-form and interesting The original building was designed in the neoclassical style in 1843 AD, and contemporary architectural artifacts were added in 1984 AD, surrounded by the exhibition with three facets of light reflective surfaces, and a new structure was added in 2002, which is a five-story building, which includes a collection of prints, drawings and pictures Photographic. Read:Blimp experience in Cappadocia 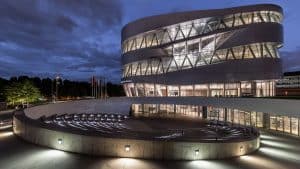 Mercedes-Benz Museum
Stuttgart had long relationships in the automotive industry, whose roots go back to the year 1887 AD, until it decided to have a museum that is one of its most prominent landmarks, and a visit to the Mercedes-Benz Museum related to visiting its exhibitions on developing cars, and tourist attractions for cars reach more than 160 cars, and there is a museum Another is called Porsche, and it has a great selection of 300 cars that are also worth a visit. 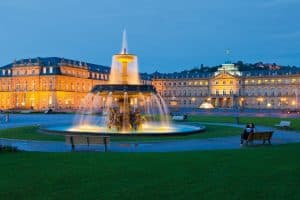 Hotel Schlossplatz
The spacious Hotel Schlossplatz is a key point for visitors and locals, surrounded by buildings dating back to the beginning of the establishment of Stuttgart, and in the middle of this vast area beautiful gardens, there you will also find a number of pieces and modern sculptures, and a beautiful fountain on the north side of the hotel, shopping arcades, shops and restaurants. In the southwest of it, on the upper ground, Kleiner Sclusplatz with its many shops and boutique restaurants. 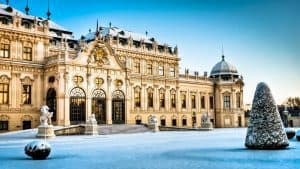 Newes Chylos Palace
Newes Shacklos Palace was built in late 1807 AD, in the late Baroque era, and it is the palace that was home to the former kings, and it is now used by the state government, just wandering around the great facade of the palace building is impressive enough for the love of visiting the palace later. Read:The best countries of tourism in the world 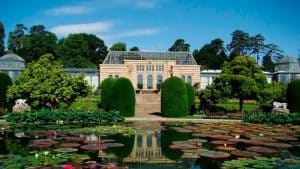 Botanical and zoological garden
The botanical and zoological garden was named after a small palace built in the Moroccan style and was built in 1842 AD, and it is one of the attractive types of monuments, was developed to become a beautiful shape decorated with aquariums and pets, and the botanical and zoo became more attractive to visitors as they number two million visitors Annually, the park is great to explore, as well as the animal areas where it is more beautiful, as it includes more than 8000 animals of various types, in addition to many types of plants.
The park was classified within the main orchards exhibition in 1939 AD, the garden area reaches 123 acres, it looks beautiful and fun to stay and explore, there are a lot of colorful flowers in many shapes and varieties, and the most wonderful and distinctive thing about it is the newly designed railway around the park, it is one of the features The most popular that provides enjoyable trips around the park in the summer, the most recent attraction you are the amazing Kelsberg Tower 40 meters from the park, the tall watchtower and excellent views of the park and the surrounding areas, if you are there in July, be sure to visit Lecterviste Stuttgart which is A festival during which thousands of lanterns are used to decorate the garden. Read:The most beautiful places of tourism in Zakopane

Konistras Market
Do not miss any visit to the city of Stuttgart without going through the best place to shop, there are many boutique shops, galleries and large stores that provide services for all pedestrians in the region, and there are high-end cafes and restaurants in the market, and there is a main railway station built with a logo The large Mercedes, which is located on a 58-meter tower, is currently being developed to become part of the metro system in Stuttgart. 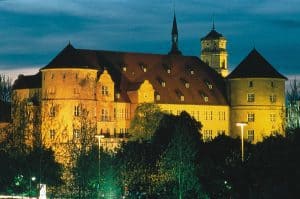 The old palace
There is the old palace in the Schillerplatz area, dating back to Friedrich Schiller and he is the most famous son of Germany known for being a poet and a dramatic historian, the palace is a large square and is home to many ancient monuments, and near it a tower that reaches a height of 61 meters, and the history of this palace dates back to the year 1390 m. 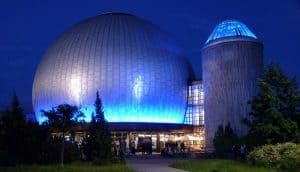 Planetarium
The Planetarium is one of the masterpieces of modern architectural Stuttgart, its home in Karl Zeiss, the dome reaches 20 meters above the pyramid of large glass, this planetarium was installed in 1977 AD, this is a vivid example of astronomical concepts and modern technology.
Fans of Karl Zeiss himself may wish to visit the visual museum in Jena, which tracks his work among other things, and includes exhibits of visual tools spanning more than eight centuries past.
Previous post

Information on the Museum of mini Egypt

Hotel reservations in Mecca: 5 of the most booked hotels in Mecca in 2022

The best place to live in Kuala Lumpur for families 2022