Tourism in Brazil..the guarantee you to spend a distinguished and unforgettable trip thanks to the wonderful tourist places that make it the main tourist front in South America, and Arab travelers give you your guide to reach it.

Learn about .. the most prominent tourist places in Brazil .. 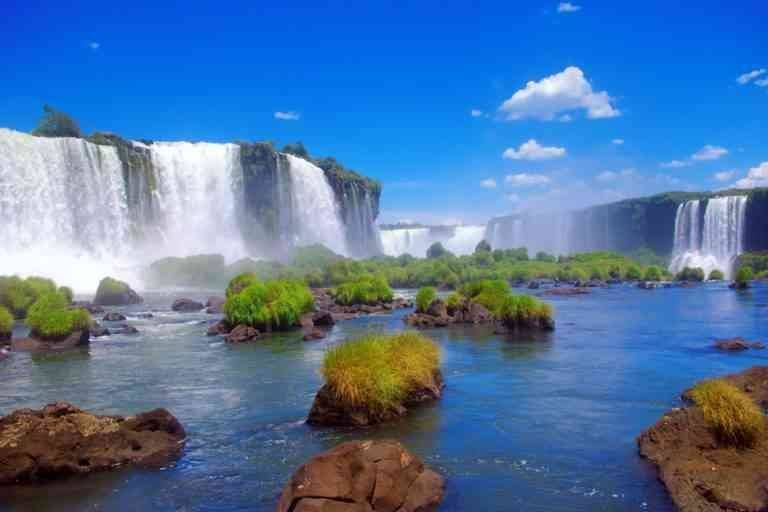 Learn about .. the most prominent tourist places in Brazil..Brazil occupies a great tourist importance as it is the largest tourist country in South America as it is the fifth largest country in terms of area and is characterized by its charming beaches and scenic landscapes that make it an honorable tourist interface for South America, and Brazil has a number A large number of distinctive islands and beaches with fine white sand, which are the most suitable place for lovers of tranquility and relaxation, and they can take the most beautiful pictures with the picturesque nature, and Brazil relies on tourism as a basic source of income. Read also: Tourism in Argentina ..

Pantanal is one of the most important tourist places in Brazil. 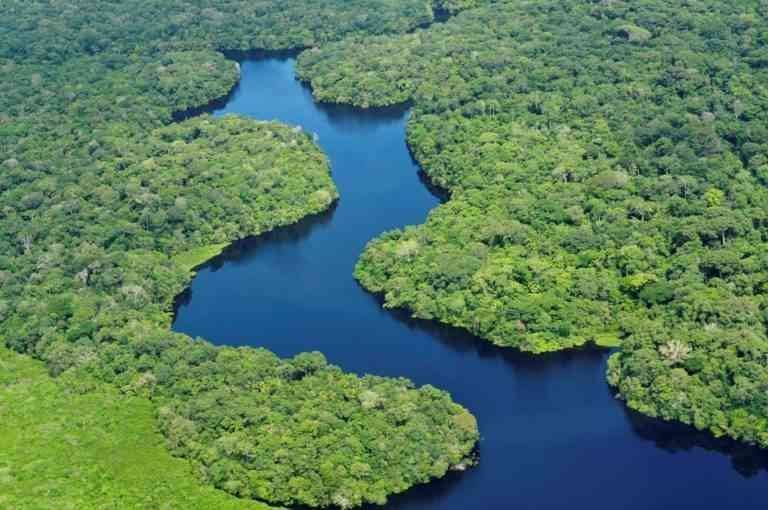 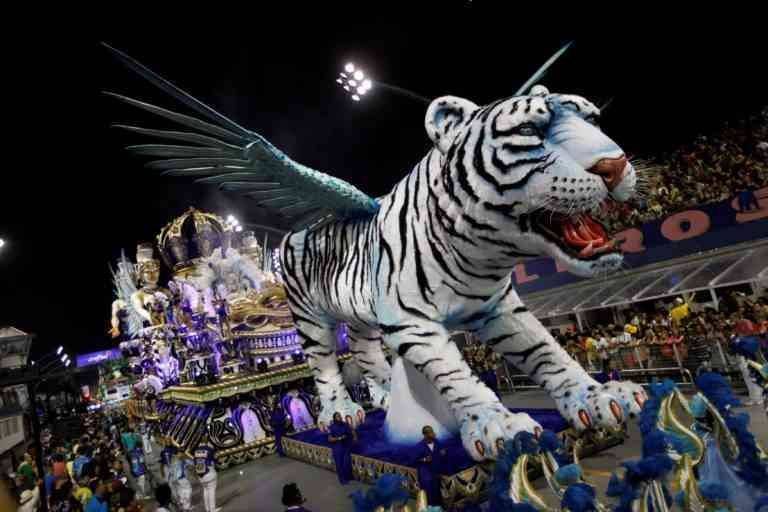 – Rio Carnival .. the best tourist attractions in Brazil..and it has a great place in the hearts of tourists and is a major destination for tourists when traveling to Brazil, witnessing the establishment of many celebrations and festivals that witness great demand and crowds, and these celebrations succeed in attracting millions of tourists For Brazil and beside the celebrations, the city is characterized by the presence of more distinctive restaurants and cafes, and all the streets are crowded with tourists to see interesting samba shows. Read also: Tourism in Bolivia ..

Amazon River is one of the most important tourist places in Brazil. 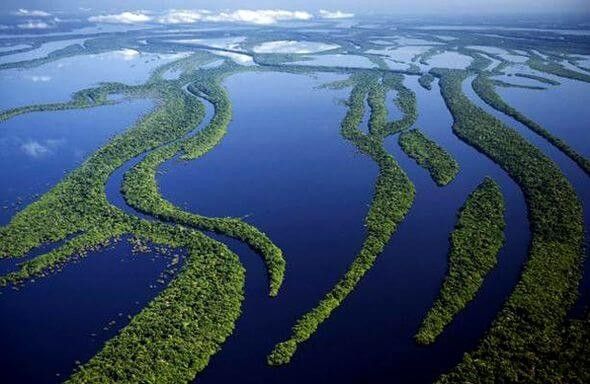 Amazon River The Amazon River is one of the most important reasons for traveling to Brazil thanks to its great position in the hearts of tourists. The Amazon is the second longest river in the world and more than 6,400 km long, and it is the largest river in Brazil in terms of size and includes large quantities of fish wealth, which It is characterized by diversity and is a great source of income for Brazil. It is an ideal place for hiking. There, you can spend the most beautiful cruises on a boat and enjoy the scenic landscapes as well as take an inspection trip inside the forests covered by the Amazon River and enjoy seeing the animals that are contained in the forests, most of them animals. Capable and operate the forest to protect them from the risk of extinction.

Salvador Beaches are the best places for tourism in Brazil. 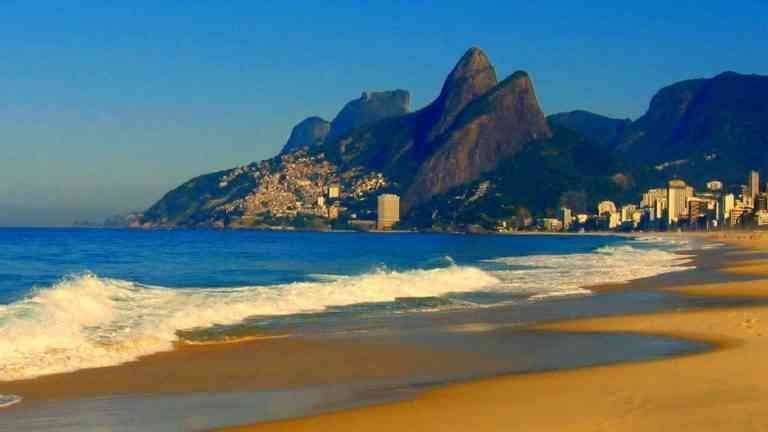 – Salvador Beaches .. The best places of tourism in Brazil..and Brazil is characterized by the inclusion of a large number of beaches with its soft white sand that suits calm lovers, and the beaches of El Salvador are one of the best places of tourism in Brazil, and it is considered one of the most important factors attracting tourists For Brazil, there you can practice all the fun leisure activities, take a diving adventure, enjoy a swim there and discover the beauty of coral reefs. Read also: Tourism in Paraguay ..

Learn about the most beautiful places of tourism in Brazil. 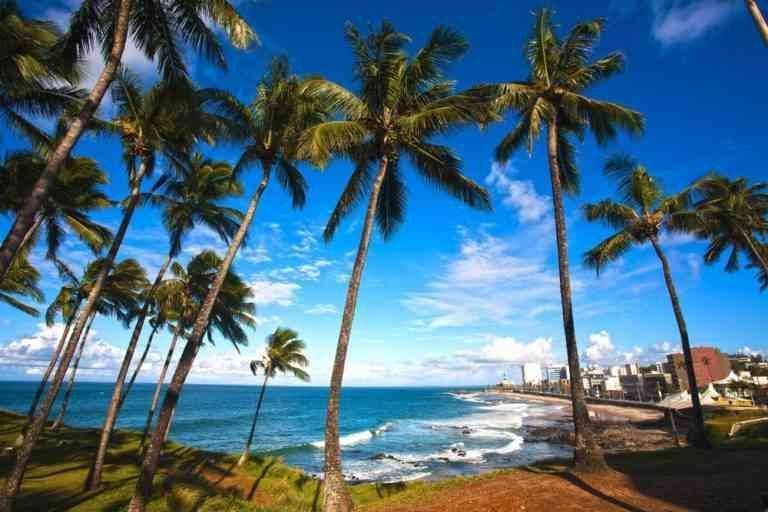 – Know .. the most beautiful places of tourism in Brazil.. Brazil includes a large group of distinctive tourist cities that have succeeded in attracting thousands of tourists to it and come on top of it: the city of “São Paulo” which is the largest city in Brazil and occupies a privileged location in southern Brazil and is characterized by high buildings and skyscrapers The clouds also include a large number of beautiful gardens and forests that have charming landscapes favored by tourists, especially lovers of tranquility and relaxation and is a suitable place for family walks. Also, the city of “Brasilia” is one of the most beautiful places of tourism in Brazil, and it is called the utopia and includes many m The distinguished tourist attractions that attract tourists and became the capital of Brazil in 1960 AD. Fortaleza is also considered one of the most important places of tourism in Brazil, and it is considered one of the tourist cities and it is the sixth largest city in Brazil and includes distinctive beaches with stunning scenery. “Which includes the largest possible number of waterfalls and green hills besides the beautiful tourist attractions that are a major façade for tourists in Brazil. Tourists are keen to visit the tropical forests that tourists love. Do not miss the visit of the city of“ Rio de Janeiro ”and occupies a distinctive location in southern Brazil and witnesses turnout A large number of tourists are crowded with mountains, distinctive heights and wonderful beaches, and witnesses the establishment of many celebrations and events and includes a large number of the most beautiful mountains, including the “Sugarloaf” mountains next to “Corcovado” in addition to the distinctive beaches, including: “Ipanema” beach and “Copacabana”.

– Here .. the most important tourist attractions in Brazil, “Iguazu Falls”. 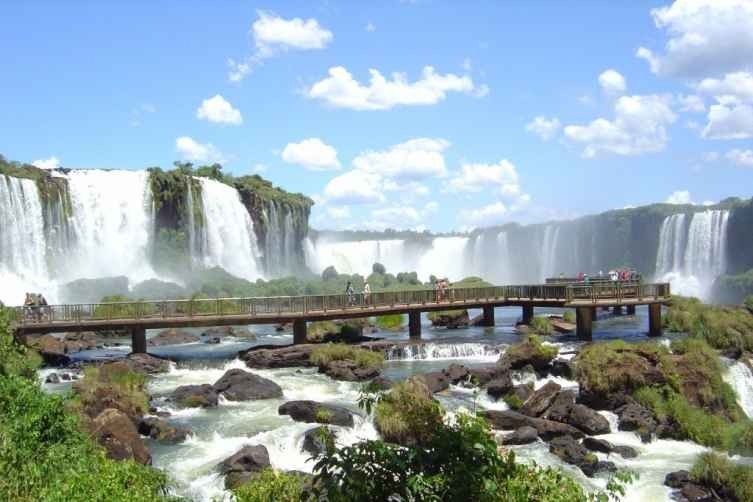 Iguazu Falls is characterized by charming natural scenery along with the pleasant weather that attracts the admiration of tourists and is one of the most attractive factors in South America and can be considered a green paradise on the land of Brazil thanks to its green spaces beside distinctive waterfalls where the most beautiful pictures were captured, the region is famous for the prosperity of wildlife and the presence of many Forests. Also read: Tourism in Colombia .. 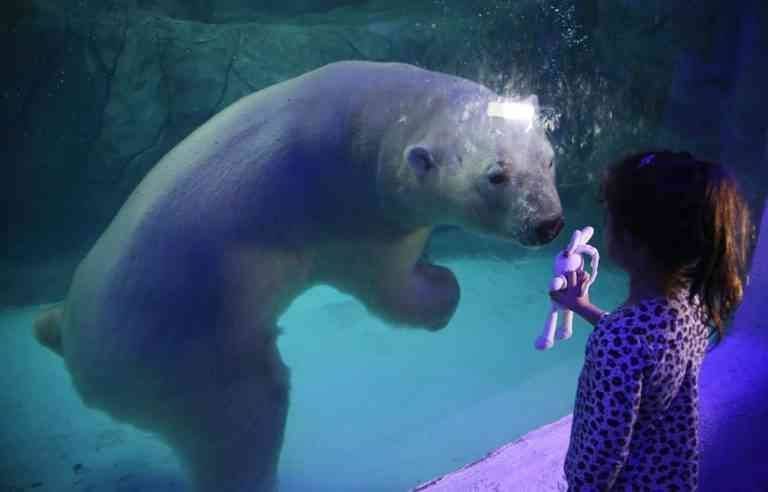 Do not miss a visit .. “Sao Paulo Aquarium” … It is located in a lively and distinctive place where the city of “São Paulo”, which is one of the largest zoos in the world and is the largest in South America, and its opening date for the year 2006 AD includes a huge number of animals up to 330 A kind of different species, some of which are rare species, and the garden works to protect them from extinction, and includes a large group of birds and reptiles alongside well-carved dinosaurs. By being in the most famous zoo in Brazil you can enjoy seeing wild animals and various types of fish beside the distinctive white crocodile, which is popular with tourists. It works The garden is to protect it from the danger of extinction. The park is characterized by the inclusion of rare marine creatures and you can enjoy watching them closely, and there you find the creatures that distinguish the oceans where sharks are near you and only a glass panel separates them from them and it is the best place to take the most beautiful memorial pictures. Distinctive bears alongside otters and other rare animals that you will not be able to see them unless you are in Brazil and do not miss to visit the Museum of Excavations there, which includes a large number of structures of dinosaurs and giant creatures. 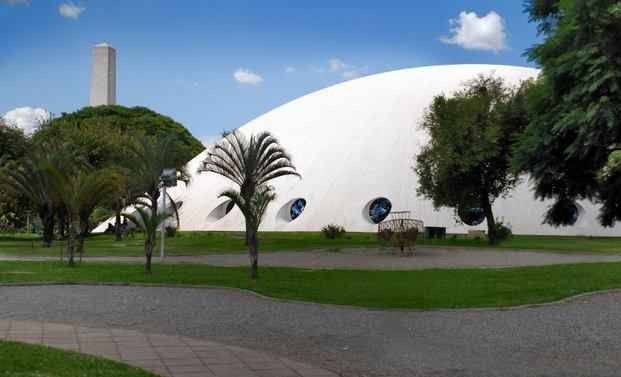 – Parque Ibirapuera “” .. It is one of the largest parks in Brazil and witnesses a large number of tourists and is characterized by its large area of ​​more than 1.5 square meters. It is an ideal place for family walks and children love it, as it is suitable for lovers of calm and relaxation, and succeeded in attracting millions of tourists to it and there. You can enjoy watching dozens of artistic shows and events and practicing recreational activities. You cannot miss the art museum, where you can enjoy more distinctive artworks and there you can get the most beautiful souvenirs and eat delicious meals and snacks, and at the end of the day enjoy biking To see the beauty of the park. 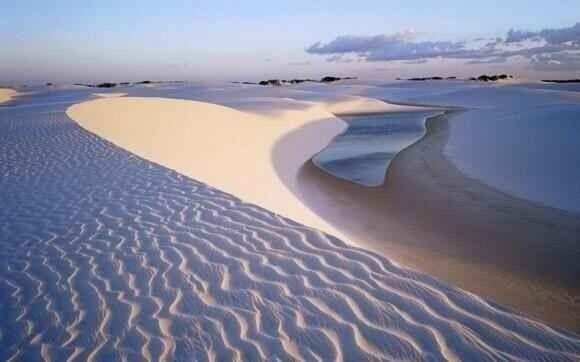 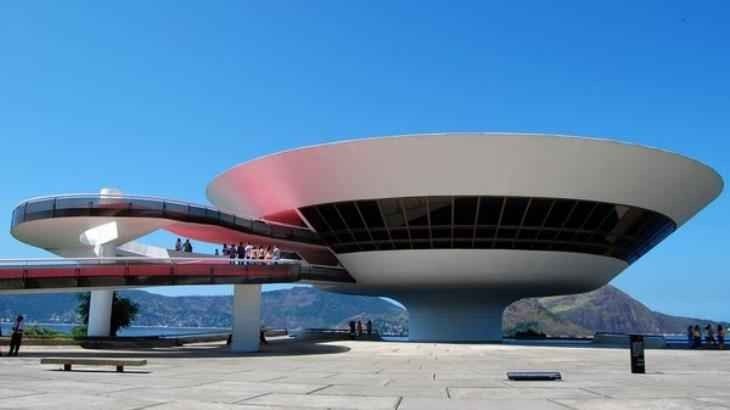 – “The Water Museum” .. It occupies a vital and distinctive location in São Paulo and witnesses a great demand from tourists thanks to the beautiful penguins it includes and is loved by adults and children, as it includes a large number of wild animals and crocodiles.

– “Botanical Garden” .. one of the most prominent monuments .. 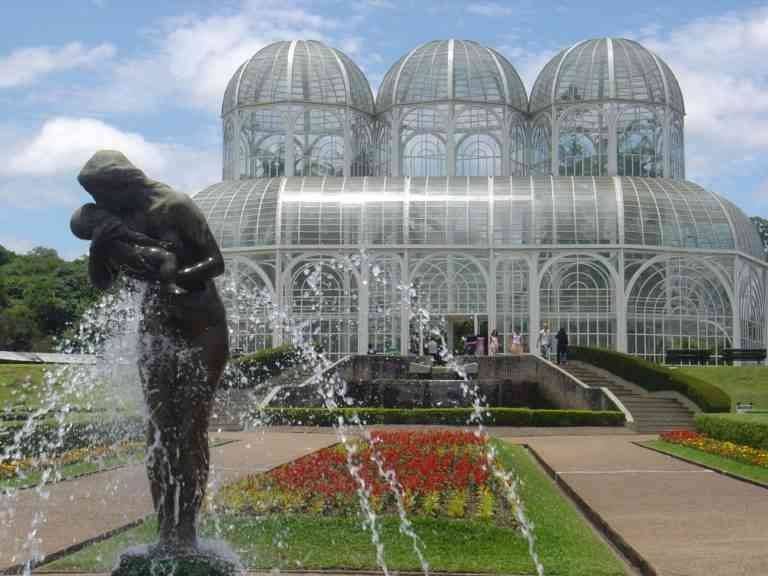 – “Botanical Garden” .. One of the most prominent monuments..and the park includes a large number of distinctive monuments and attractions that make Brazil a major tourist front for tourists, and its history dates back to the year 1808, and the park includes pets and the most famous amusing monkeys beside the distinctive birds of species Various and rare, as you find there are the best types of spices and medicinal herbs and you will find there restaurants and cafes that offer delicious food and delicious drinks.

– “Emerald Island” .. an ideal place for those who love calm and relaxation.

It is an ideal place for lovers of calm and relaxation thanks to its picturesque nature and it is called “Fernando de Noronha”, and it is one of the most famous tourist attractions for Brazil and it is visited by thousands of tourists from different parts of the world.

– Corcovado Mountain … one of the most attractive factors for tourists to Brazil.

The mountain occupies a great place in the hearts of tourists and witnesses a large turnout of tourists and there you can see the sights from the highest point, and the mountain contains a lot of tourist attractions that succeed in attracting thousands of tourists, such as statues that were built from distinctive stones.

Tourism in Sfax, Tunisia … and the most beautiful tourist places!