The 8 best apartments for rent in Paris, La Defense 2022

The 6 best activities in the Frankfurt Zoo Germany

Where are the Canary Islands located?

What is the capital of the Maldives

Your travel guide to Iran (Part 2)

Tourism in Comoros with pictures is one of the best possible options when thinking about tourist travel, as it is one of the most beautiful countries that enjoy natural magic, as well as its wonderful views of the Indian Ocean, and it contains many mountains and highlands, and there are many tropical forests and its forests are characterized by its freedom from animals Predatory, the Comoros consists of four roots in a very wonderful and beautiful, and in the next article we will learn about the four islands and the best places of tourism in the Comoros.

It is one of the best tourist places that allow both to do many many different activities, as it contains many museums, temples, theaters, markets, and Comoros are considered among the Islamic countries and their people speak the Chesimaria language, then the Arabic language, and the third place the French language, and is considered one of the The best places for honeymooning, and the Qum Islands are made up of four in its magnificent beauty.
At the beginning of these islands, the island of Mayotte is one of the islands that follow the French system of government, and one of the most important characteristics of this island is that it contains a shallow lake, and it is also characterized by the presence of coral reefs in abundance and picturesque shapes and colors in its coasts.
The island that follows the island of Mayotte, is Moheli Island, and it is considered one of the smallest islands in the country, and one of the most important features of this island is the large number of beaches with fine white sand, and clear waters that spread green turtles abundantly.
And the third island is the fourth Comoros, and this island is distinguished by the many desert places and yellow sand, which allow different safaris for tourists.
The fourth island is the island of the Great Moon, and is famous for having the largest active volcanoes on Earth, besides that it possesses many natural mountains and green spaces.

Read:The most beautiful cities of Spain: the best tourist places in Spain

The best times to visit the root of the moon

Comoros is one of the countries characterized by a tropical climate, and there is a change in temperatures per day and the climate in them differs from one island to another, due to the different terrain in them.
The islands go through two seasons of climate throughout the entire year, the dry season, and the other rainy season. The islands are subjected to severe climatic strikes in the climatic period, which is the most in the March season, as it is the most rainy season of the year, so we recommend after visiting the country in this period.
The period from month 5 to month 8 is one of the best tourist periods during which you can visit the country, and listen to the wonderful times.
As for the winter season, it is from the month of 12 to the month of 4, when temperatures reach about 30 degrees Celsius.

Entrance to the Comoros

All citizens around the world can travel to Comoros, as the state allows travel to non-citizens without requiring a visa to enter its territory, where a travel visa can be requested upon arrival at the airport, but only it is required that your passport be valid for a period of not less than 6 months, and you can stay inside Islands for 30 days from the date of travel.

The best tourist cities in the Comoros

The city of Moroni is the capital of the Comoros, and is considered one of the best and most unique cities, as Moroni is located in the Indian Ocean, surrounded by mountains full of green plantation from all directions, and it is spread by a very large number of rocky shores full of tropical palm trees, and a number of lava With Kartala Mountain, the city enjoys a blend of breathtaking natural life and exciting wildlife.
One of the most important places you can visit during your trip to Moroni Island, Region AFor an old city Which is characterized by ancient architecture, and the region includes many places that contain a number of beautiful architecture, as well as a number of popular markets and various shopping centers, and there are Old Friday Mosque Characterized by columns of Arab heritage, and has carved doors of many decorations, also includes the city A.For the National Museum, It includes a number of exhibitions of cultural and natural history.
The period that you can visit the city of Moroni in the Comoros ranges from 3 days. 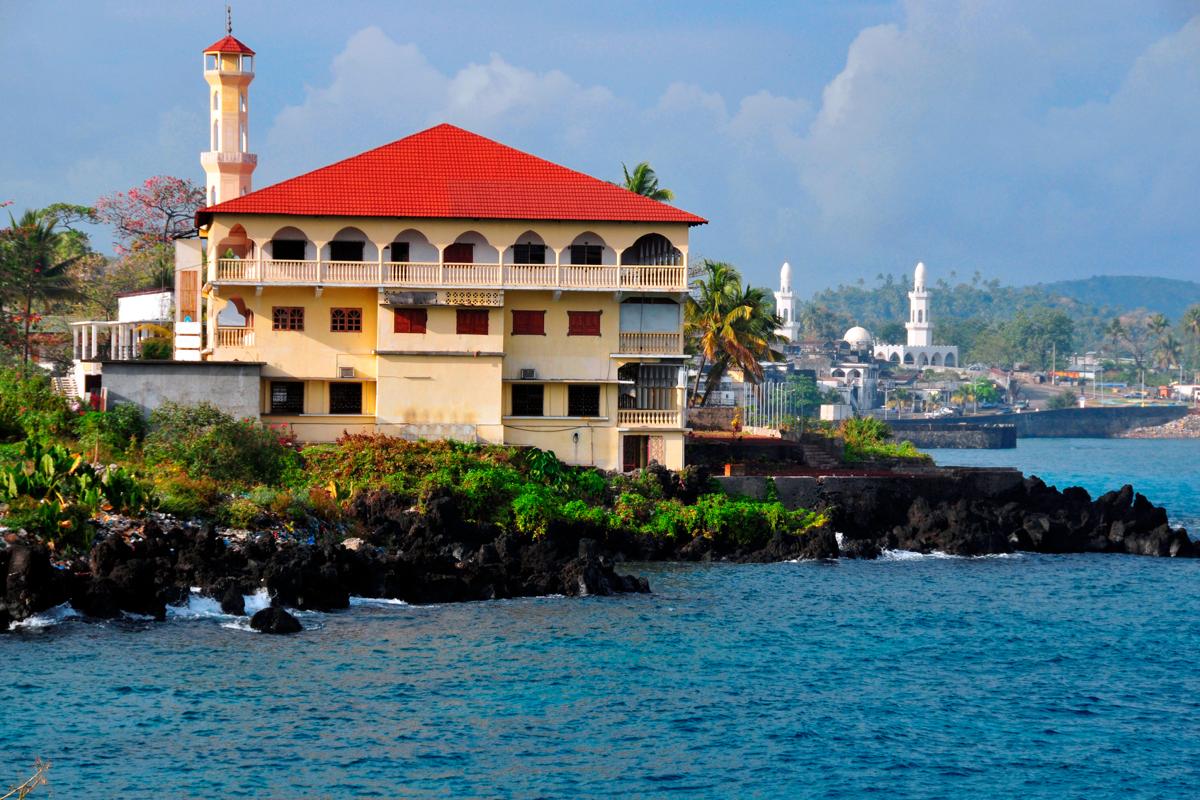 It is one of the most peaceful cities in the Comoros, and is considered the third largest city in the country of the Comoros, and is considered the perfect choice for people that prefer calm and picturesque nature, as it helps you provide a financial atmosphere for isolation and a sense of calm away from the hustle and bustle of the city, and there is also a group of The various activities on its coast that attract many tourists in search of calm.
The time available to visit the city of Fombini Comoros is two days.

One of the most famous cities in Comoros to attract tourists, and it is one of the second largest cities in Anjouan Lunar within the Indian Ocean, and it is one of the cities that has an ancient and ancient history, and was in the old of the prosperous commercial places, and was the capital of the sultans at that time, and the city contains Many forts and towers designed to protect the country from external aggression at the time, as the country is famous for many huge palaces, whose historical origins date back to the 16th century, characterized by many houses designed differently with distinctive wooden doors and inscriptions indicating the coast, contain Many historical mosques, such as the Shirazi Mosque, which is designed with stone blocks, contain many distinctive coastal beaches.
The time available and possible to visit the city of Domune, Comoros is only two days.

What is Oman famous for?

What is the city of Taif famous for?

Top 7 activities at the ladies beach in Abu Dhabi

A report on the Hilton Paris Levance

Report on the Four Points by Sheraton Bur Dubai